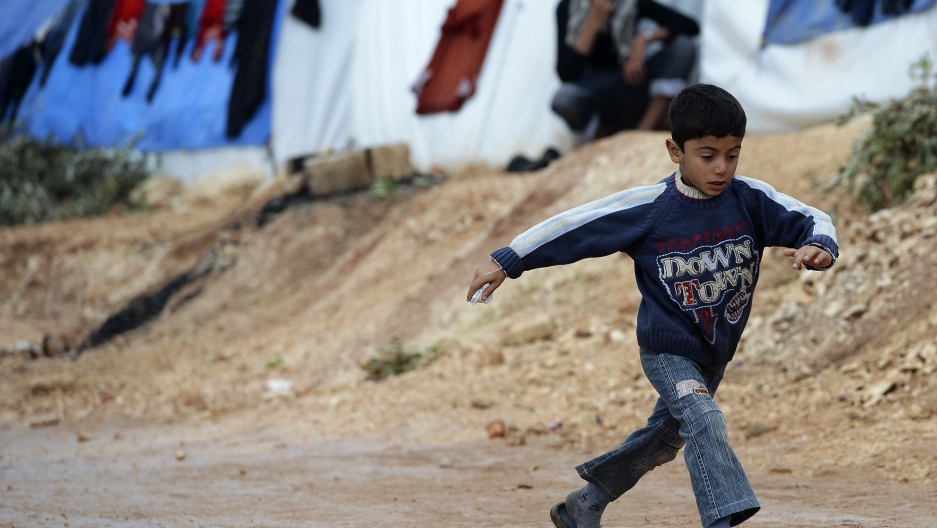 A Syrian boy jumps over a pot hole on a refugee camp in Qah, near the northwestern Syria city of Idlib on November 24, 2012.
Credit: FRANCISCO LEONG
Share

Up to 10 children were killed in the bombing of a playground near Damascus in Syria, allegedly by a government jet dropping a cluster bomb.

An extremely graphic video posted on YouTube (WARNING: extremely graphic) showed children's bloodied bodies on the ground, including two girls lying dead in the street and two dead boys in the back seat of a parked car.

CNN quoted a woman standing over a young child, dressed in purple pants and a matching shirt, as saying:

"May God bring you pain, Bashar."

According to the BBC, citing activists, a MiG fighter hit the playground the village of Deir al-Assafir, east of Damascus.

The Associated Press cited another activist group, the Revolution Command Council, as saying 10 children had been killed by warplanes as they played outdoors.

"None of those killed was older than 15 years old," Abu Kassem, an activist told Reuters.

The bombing came as intensive fighting continued around the capital, BBC added.

However, CNN cited Rami Abdulrahman of the Syrian Observatory for Human Rights as saying that it was unclear whether or why the children were targeted.

They were perhaps in an area containing rebel fighters and Al Qaeda insurgents, or simply outside after a morning of intense shelling.

Further footage appeared to show cluster bomblets on the ground.

"We collected 70 of these so far," one man told Reuters.

According to the AP, the activist videos appeared genuine and corresponded to its other reporting on events.

Syria has barred most reporters from the country making it hard to verify the report.

There have also been reports of the regime of Bashar al-Assad using cluster bombs as the conflict intensifies, the BBC wrote, adding that the Syrian government denied the accusations.