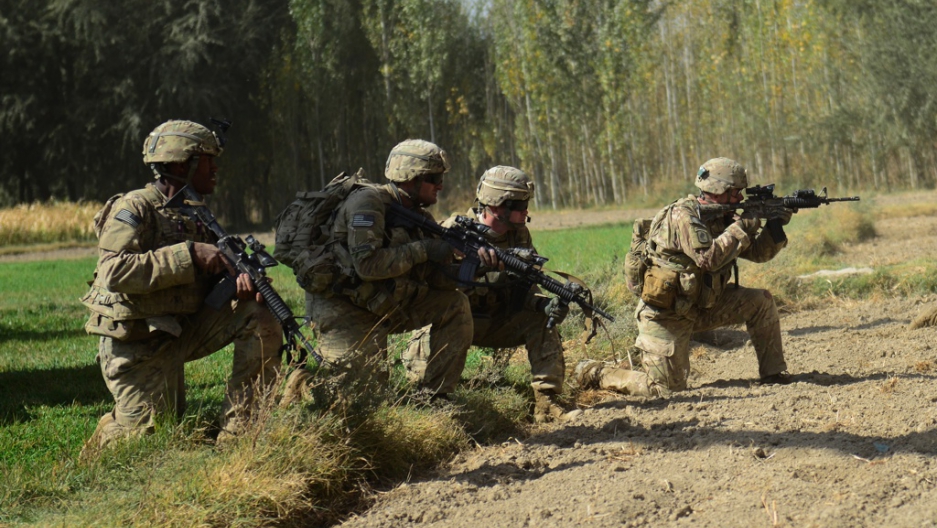 PUL-I-ALAM, Afghanistan — The first sign of the Taliban's growing strength in Logar province comes on the main highway, where culverts have been blown up at regular intervals, each one an ideal place to hide a bomb aimed at passing military convoys.

Next, there is a police post made from a shipping container and surrounded by sandbags. It looks like it has been set on fire and abandoned.

But the definitive proof that the insurgents are in the ascendency here can be found among the residents. Those who are willing to be interviewed are happy to express their admiration for the Taliban, while many others are scared of talking to a journalist.

"If the people didn't support the Taliban, how could they be such a powerful movement like they are now?" said Mohammed Rafiq, a local bookshop manager.

Logar is a short drive to the south of Kabul. In recent years, it has become one of the most dangerous places in Afghanistan.

The situation here is a blueprint for what may lie ahead for large swathes of the country as NATO forces continue to withdraw. Outside the district centers, the government has little influence or backing. The foreign troops are even more unpopular.

A tense atmosphere hangs over Pul-i-Alam, the provincial capital. During a recent visit, a number of pick-up trucks belonging to the national intelligence service were parked in the center of town.

Their presence offered no great comfort to residents, who frequently accuse the security forces of being part of the problem.

Sayed Abdul Wahab is a local high school student who told GlobalPost that even his teachers use Taliban songs as the ringtones on their cell phones.

Aged 18, he is an ethnic Tajik — a section of society not usually associated with sympathy for the insurgents. He openly admitted supporting the Taliban, claiming US troops deliberately target civilians. He accused the police of discriminating against him and other bearded villagers who come into town wearing traditional Afghan clothes.

"This fight is a jihad and everyone knows this and supports this. These people are our oppressors and our enemies, they are not letting us live and be happy," he said.

Last month, four children were killed in a battle between foreign troops and the Taliban in nearby Baraki Barak district. In response, Gen. John Allen, the commander of NATO forces in Afghanistan, quickly offered his "sincerest condolences to the families of the civilians that were killed."

Meanwhile, the rebels are making their own attempts to win hearts and minds. Besides using tactics including suicide attacks, assassinations and kidnappings, they run an informal judicial system that is generally regarded as cleaner and faster than the official courts.

Logar is also a key transit route for insurgents travelling to and from Pakistan along old mountain trails formerly used by the mujahideen against the Soviets in the 1980s.

Haji Sayed Habibullah Husseinyar was a resistance commander then, and is now a tribal elder. Another Tajik, he said a number of different militant factions are active in the area and people "give them food, a place to stay and pray for them" in accordance with Islamic teachings.

“In the government you cannot find a good man — all of them are corrupt,” he said.

Husseinyar claimed that when US forces were searching a village they asked him why people hated them. He replied, “If you want to help us go forward, go back to your homes and send us your engineers, doctors, and teachers, not guns, troops, and tanks.”

As well as being strategically vital, Logar is the location of a multi-billion dollar copper mine project that is seen as an important bellwether for Afghanistan’s long-term economic hopes. In September, Reuters reported that Chinese investors have stopped work on the site due to security concerns.

Anyone here associated with government-backed initiatives or the occupation is at  constant risk. Earlier this month, the dead bodies of two Afghans were found near Pul-i-Alam town, with the government offering differing versions of who they were. One official account claimed they had been translators for NATO while another said they had been employees of a contractor working with the Afghan army.

Timor is a taxi driver who travels the 50 minute journey from Kabul to Pul-i-Alam daily. He told GlobalPost the Taliban are active everywhere, including the provincial capital.

He described how a colleague had agreed to take some men to a local military base. Soon after dropping them off he picked up a new passenger who duped him into going to a nearby village, where insurgents were waiting. They beat him and confiscated his car as punishment.

“Security does not exist here. Everyday after 4 p.m. people are not safe inside the town, on the highway or in the villages,” Timor said.

“At around 4 p.m. the Afghan soldiers are leaving the highway and going to their base. Even if you swear on the Quran, they will not come out to help you.”