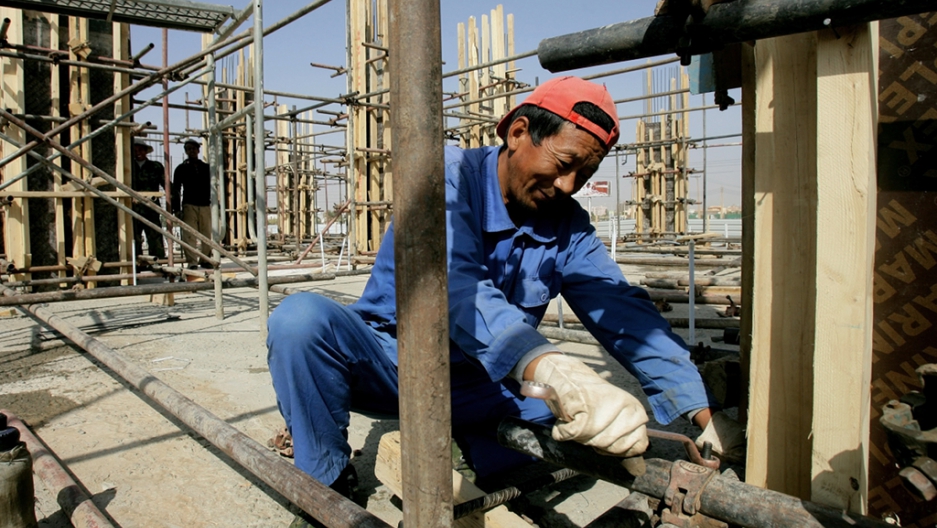 A Chinese worker fixes pipes at a construction site in the capital Khartoum. China has emerged as a major funder of infrastructure projects throughout Africa, pledging $20 billion in investment over the next three years.
Credit: Ashraf Shazly
Share

Not long ago, officials and entrepreneurs from Africa seeking access to large quantities of foreign capital had little choice other than to deal with Western financiers.

That’s no longer the case — especially now that China is the world’s second biggest economy.

Beijing, for example, recently pledged to invest $20 billion in Africa’s infrastructure and agriculture over the next three years.

That’s creating some unease among economists and politicians who believe the investments may be more about securing rights to infrastructure and resources than building Africa’s industrial capacity.

Hillary Clinton referenced such doubts in a 2011 visit to Zambia when she told Africans to be wary of the potential for “new colonialism” in the recent slew of foreign investments.

“We saw that during colonial times it is easy to come in, take out natural resources, pay off leaders and leave," she said, adding that “I would argue that there are more lessons to learn from the US and from democracies,” than China on investment matters.

Chinese officials have been quick to refute such claims, citing a list of Chinese-funded agricultural development centers, schools, hospitals, and factories that have brought jobs and education to Africans.

Still, a long history of resource exploitation, when corrupt leaders take lucrative offers from big companies that rarely benefit ordinary Africans, is fresh in their minds.

“If you want to negotiate land investment, at the very least you can set guidelines for [the investor’s] conduct. The first instinct of a foreign investor is to help itself,” said Kingsley Moghalu, deputy governor of the Central Bank of Nigeria, during a conference at Tuft’s Fletcher School last month. “You must construct a win-win deal by saying ‘half of what you produce must be sold here’ or ‘half of what you produce must be processed here.’”

Whether or not China’s recent investments are truly helping Africa, many Africans see China as a critical benefactor whose positive influence is quickly eclipsing America’s.

A 2007 Pew Poll found that Africans in most nations tend to overwhelmingly view China as a more helpful foreign investor than the United States. About 86 percent of people polled in Senegal held a positive of view of China’s economic influence, compared to 56 percent who favored America’s role.

Different investment practices, in addition to the considerable disparities between their levels of financial commitment, play a huge role in determining Africans views.

“The Chinese don’t express their values as part of the business transaction. As far as I’ve seen, Africans love that. Americans come in with a bag of money and a bag of attitudes about governance, human rights and any number of things. This hardly helps with their reception,” said Michael Fairbanks, a philanthropist and advisor to Rwandan President Paul Kagame on private sector development, who also attended the Tufts conference.

The growth of Chinese interest in Africa has also given leaders in the region a choice they didn’t have before, when American and other Western investors were the dominant players.

“African leaders like China — not out of a cultural affinity, but because they provide a choice that gives them leverage with the West, which drives the West crazy,” added Fairbanks.

Some experts agree that, if well managed, this leverage could help African leaders steer their countries towards economic autonomy and prosperity by making sure foreign investments do more than ferry African resources and profits overseas.

But while optimists see Africa’s growing middle class and consumer market as proof of its growing economic potential, others say it is no replacement for a strong production capacity, making Africa’s status as a major economic player a long way off.

Reid Whitlock, president of Rwanda’s School of Finance and Banking, offered a sobering view of Africa’s current status as a viable economic power and the stability of its growing educated classes.

“I don’t think Africa is ready for the prime time. After 25 years of living in nine different countries, I’ve seen the hype and buzz in investors talking about Africa as the next big place. I implore you to look deeper. This middle class, are they sustainable? Are they living beyond their means? They are. There is a lot of fragility,” he told GlobalPost.

With an expanding middle class and a flurry of multibillion-dollar investments from China and Wal-Mart alike, sub-Saharan Africa has impressed some as an enticing new economic frontier.

Not everyone, however, agrees.

“If you think Africa is on the cusp of some major economic breakthrough, I hate to rain on your parade. Africa is participating in globalization, based on Africa as a consumer market. Is this transformation? It isn’t,” said Moghalu, the Central Bank of Nigeria, deputy governor.

Moghalu attributed much of the growing foreign direct investment in Africa to the perception that it’s increasingly safe compared to regions to its north.