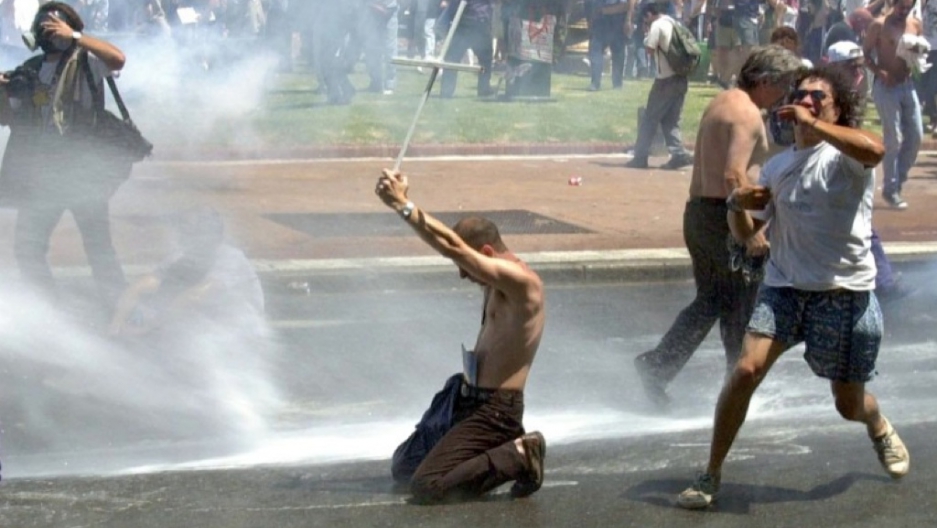 An Argentine kneeling protester holds up a cross to a water cannon as police spray demonstrators Dec. 20, 2001 in the Plaza de Mayo in central Buenos Aires. Argentina plunged deep into chaos ahead of its historic 2002 default.
Credit: Ali Burafi
Share

LIMA, Peru — Argentina’s ongoing fight with a “vulture fund” looking to profit from the South American nation’s economic crisis of a decade ago may be about to trigger more global financial turbulence after a surprise US court ruling.

Run by Mitt Romney donor Paul Singer, NML had already made headlines last month when it won a court order in Ghana to impound a training frigate, ARA Libertad, used by the Argentine navy.

Fernandez de Kirchner was defiant then, insisting that her government will never pay NML, which bought up a chunk of Argentina’s unpaid debt on the cheap after the country’s $95 billion default in 2001 — still a world record.

However, Wednesday’s ruling by District Judge Thomas Griesa may strong-arm Buenos Aires in a way that the loss of a ship valued at a few million dollars never could.

Crucially, it targeted the Bank of New York, which handles Argentina’s bond transactions, ordering the bank to prioritize the payment to NML ahead of other creditors which Buenos Aires does recognize.

That puts Argentina at risk of a new $20 billion default within weeks if it continues to refuse to pay NML and could undermine the complex debt restructuring negotiated with those other creditors.

Argentina’s Economy Minister Hernan Lorenzino promised to appeal the decision. Nevertheless, a key point of Griesa’s ruling was that the government immediately put NML’s money in an escrow account without waiting for the appeals process to finish.

“This judgment does not tolerate that a president could stand up to the interests of vulture funds and say that we are defending the position of a sovereign nation,” Lorenzino added.

“Do they know who the vultures are? They are a special breed, on the edges of the financial system whose objective is pure speculation.”

The court ruling again shines a light on vulture funds, which have been heavily criticized for preying on some of the world’s poorest nations, particularly in sub-Saharan Africa.

Typically, the funds purchase junk status national debt, which the markets expect to go unpaid, at bargain basement prices. They then attempt to make a profit by enforcing the debt in court.

Vulture funds have been widely criticized for acting unethically, potentially forcing weak governments to slash education budgets and social programs for the poor.

In 2010, the UK passed the Debt Relief (Developing Countries) Act, intended to protect the world’s 40 poorest countries from vulture funds.

And both the US Congress and Australian legislators are considering similar bills, said Nick Dearden, director of the London-based Jubilee Debt Campaign, which calls for the pardoning of national debt of developing nations.

He added that although Argentina was a wealthier nation than many of those targeted by vulture funds, Buenos Aires was right to argue that the debt was illegitimate.

Most of it was forced onto Argentines by the brutal 1976-1983 military dictatorship, including to fund the Falklands War, he noted.

“There need to be much stronger regulations to prevent these companies from buying up the national debt of stricken countries on the cheap and then profiting from it,” he told GlobalPost.

“We fear that in the future they will even be preying on European countries with debt problems, such as Greece.”

Argentina’s debt default came after three years of economic collapse, involving a vicious circle of plummeting GDP, surging unemployment and inflation, government austerity and a run on the banks.

Millions of Argentines lost their life savings when the government was forced to un-peg the peso from the dollar. With credit running out, the government had little choice but to refuse to pay international creditors.

Eventually the government of President Nestor Kirchner, Cristina Fernandez de Kirchner’s husband who died in 2010, reached a deal with 93 percent of bond holders that would pay them 30 cents on the dollar.

But both Kirchners have insisted they will pay nothing to those bondholders such as NML that have refused to negotiate and continue to insist on payment in full.

Dovetailing with the couple’s leftist economic philosophy, including a rejection of “neoliberal” free market policies, that stand has been controversial. But it has also been widely viewed as effective in hauling Argentina back from the economic brink.

“Had Argentina not defaulted when it did, it is extremely unlikely that it would have recovered to the point where it did, and then none of its creditors would have got any of their money back,” added Dearden.

Based in Cyprus, NML’s website describes it as “a global equity investment company” focused on “mobile application/software companies” but which is also open to other investment opportunities. The company did not respond to GlobalPost’s requests for comment.