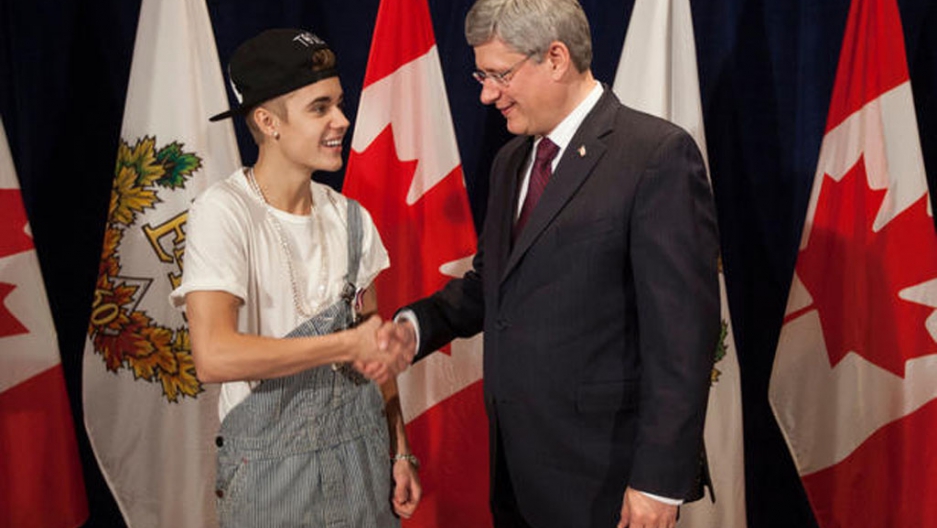 First, the Biebs received a Diamond Jubilee Medal from the prime minister on Friday. Yes, that’s bad enough for some.

Second, he wore an outfit befit of "Breaking Amish" to the presentation.

That's inexcusable to others.

Sure, you could make a case for Bieber receiving the award.

He is now one of 60,000 Canadians honored for “significant contributions and achievements by Canadians” in the 60th year of Queen Elizabeth II’s reign.

The medals normally go to long-time volunteers, community leaders or other prominent personalities.

For example, Johnny Issaluk received a medal for helping improve health and community well-being among people in the northern territory of Nunavut.

Then there’s Bryden Hutt of Yarmouth, Nova Scotia. The young disabled boy received a medal for his dedication to and support of the Children’s Wish Foundation.

Has the 18-year-old pop star contributed to Canada?

Bieber – from Stratford, Ontario – is the same dude who claimed he was “part Indian or something,” and that entitled him to free gas in Canada.

However, he's arguably the most popular Canadian in the world. So that’s where Canadians are divided.

What has united the nation, however, is Bieber’s attire when meeting his nation’s leader.

OK, he received the award before a concert in Ottawa, the national capital. And, maybe, he was busy rehearsing. And, yeah, he’s 18 years old. We get that.

But, please boy, put on a pair of Dockers and a button-down shirt.

Instead, Bieber shook Prime Minister Stephen Harper’s hand wearing a backward baseball cap and a pair of train-engineer overalls (with one strap undone).

Oh, we’re sorry, Justin, did we catch you between teets? True, when those cows want to be milked ...

The PM took a high road, taking to Twitter and saying, “Was happy to present @justinbieber with a Diamond Jubilee Medal today.”

Bieber’s reaction to the honor was less impressive: "Overauhls. lol."

[View the story "Justin Bieber: befitting a Queen?" on Storify]