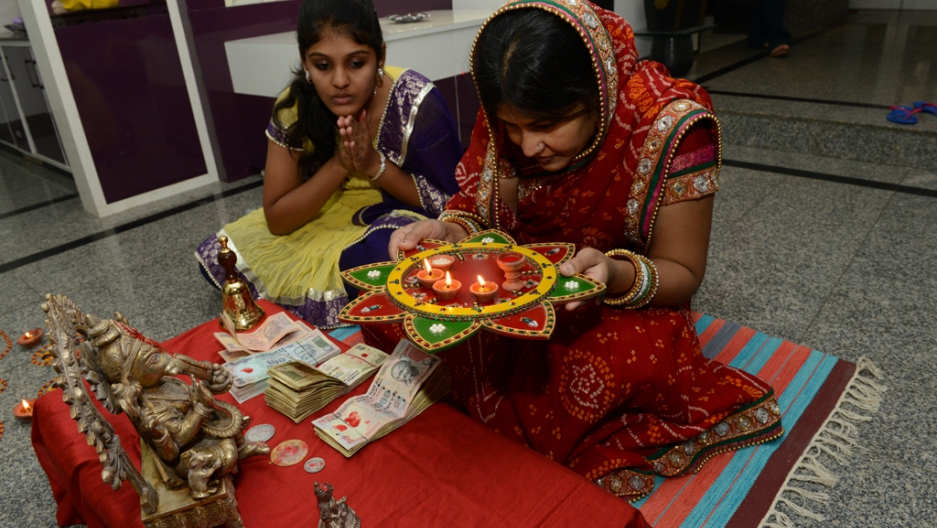 An Indian entrepreneur and her daughter participate in a ritual as she observes "Dhanteras", the first day of the five-day Diwali Festival as celebrated in parts of north India, in Ahmedabad on November 11, 2012. Dhanteras holds special significance for the business community due to the customary purchases of precious metals on this day.
Credit: SAM PANTHAKY
Share

A teenage girl was killed by a man after she and her mother criticized him for peeing in public in Delhi, Indian authorities today told BBC News.

The girl, 17-year-old Binoo, was shot and killed on Thursday in the Indian capital's Nizamuddin area, said officials. The attack  also left a bullet in her middle-aged mother, Sadmani, who survived but is in intensive care, according to The Times of India.

Delhi police official Ajay Chaudhary told BBC Hindi the two females lived in the same building as the suspected attacker, a man identified by The Times of India as Javed.

Chaudhary said the "girl and her mother objected to the man urinating near the gate of the house," prompting an argument that saw the man going back into the house threatening, "'I'll see you.'"

He returned with a pistol and shot at both of them, Chaudhary told BBC, adding that authorities are not aware of "any other dispute" between the three. Relatives told The Times of India that Sadmadi was known to have occasionally helped the man's family with financial matters.

Mother and daughter were home alone making dinner when they heard the man peeing, said officials. He is suspected of being drunk at the time of the offense, reported The Times of India, citing a neighbor as saying:

"They [mother and daughter] served the food and switched on the TV when Javed arrived with a companion. The companion waited at a distance while Javed stood at the stairs leading to the house and began relieving himself. Sadmani and Binno emerged and loudly asked him to leave,"

People ran to the scene when they heard the womens' screams. Sadmani's husband and son were out at the time of the attack, police said.

Authorities have launched a search for the man, who went on the run after the incident. A murder case has been filed against him, said The Times of India, and he had reportedly been charged with a previous count of attempted murder.