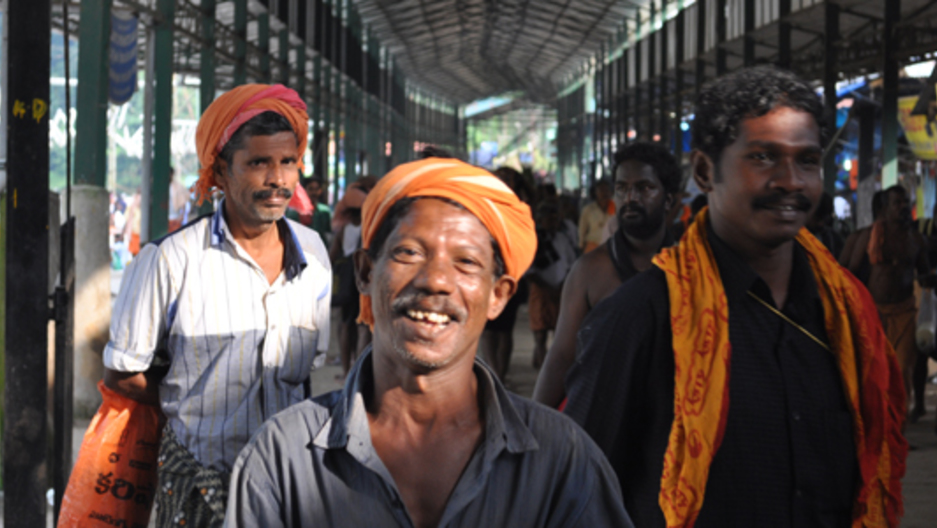 Pilgrims on their return from prayers at the temple. (Photo: Ashley Cleek)

Share
Every year, millions of pilgrims flock to a temple in the South Indian state of Kerala. Some 25 million people of all faiths – Hindu, Muslim and Christian – join in the pilgrimage. By mid-January, after 41 days of fasting and miles of walking, pilgrims reach the temple in the middle of the forest and await a sign from God. For decades, a growing group of rationalists have protested this temple. The rationalists believe the temple authorities and government are lying to pilgrims and creating fake miracles. Reporter Ashley Cleek traveled to India to explore this battle between religion and rationality. The temple complex at Sabarimala is massive, and noisy. Shops sell CDs and DVDs of devotional songs. Mammoth purple and yellow buses grumble past, decorated in garlands of orange and yellow flowers. The temple grounds are thronged with men, dressed in simple black cloth, barefoot, and carrying small bundles on their heads. These are the Swamy Ayappa pilgrims. And this temple, Sabarimala, is among the most famous in southern India. The pilgrimage to Sabarimala starts in mid-November. Men dress in simple black clothes. They abstain from meat, alcohol and sex. They're supposed to walk barefoot and reach the shrine by January 14th. No women between the ages of 10 and 50 are allowed. After prayers, pilgrims wait on top of the hills, and at a pre-appointed time, a light appears. The light blinks: one, two, three. "I have seen the light, yes," says Satish Madhvan, a businessman from Bangalore. "It's like a flame, you know." "The moment this happens, everybody has this huge chant going up, Swamy Ayappa, it's like an eruption. They keep saying this: 'Swamy Ayappa, Swamy it goes like that." "It's like a spell," says Jayakumar, head of the board that takes care of the temple and runs the festival. "All these tens and thousands, millions of people stand there, just to see that light glow three times." The light in the sky is broadcast on national television and radio. For decades the light was believed to be divine, the light of God. But in 2011, the government admitted that the light at Sabarimala is fake. That was music to the ears of India's rationalists who believe that all phenomena can be explained by science. The rationalists have spent the past few decades trying to debunk many of India's religious myths, including Sabarimala. "Because this is a man-made disaster and under the guise that this is a divine phenomenon hundreds of thousands of people are attracted there," says Philip Varghese, an attorney and a rationalist. Way back in 1981, rationalists took photos of workers lighting giant camphor lamps, but nothing changed. Then, in 1999, 52 pilgrims were killed trying to catch a glimpse of the light. The same thing happened in 2011: 106 were killed. The rationalists had had enough. Varghese's office in the port city of Kochi is packed with case files and books analyzing India's penal code. Philip took up the case for the rationalists. In court, the rationalists blamed the government for orchestrating a phony miracle, which resulted in the death of the pilgrims. "Hundreds of thousands of people are coming thinking it is a divine thing," Varghese says. "And the government keeps mum, because trying to stop this might be controversial." The High Court ruled in favor of the rationalists. In front of the High Court, the government and the board that runs the temple admitted that they light the lamp. But still, many pilgrims believe in the miracle that the light is divine. Jayakumar says it doesn't matter. "I know that it is man-made, I know everything, but still you forget all that," he says. He says the festival is like any religious ritual. It is about a feeling and faith. "You should surrender your belief, you know," Jayakumar says. "You don't have to think who lit the lamp, when did they go there, nothing. You see a lamp and you are transported to a different plane. That is faith. Faith has no rationality." Jayakumar says they will keep lighting the lamp every year. After all, he says, people expect it. Last year, a million and a half pilgrims showed up to see the lights. And temple authorities expect the numbers to grow. The rationalists say faith is fine, but public safety is more important. They plan to ask a court to stop the lamp-lighting for good. Rationalist Anil Kumar says as an Indian, it is his duty to protect and educate his countrymen. "We have a fundamental duty to our nation to develop a scientific temper, spirit of enquiry, and reform," he says. "And this is cheating the people, especially believers." Anil argues that people will still pay homage to Swamy Ayappa at the temple, with or without the light. So why keep lighting it? Madhvan, the Bangalorean businessman agrees. Light or no light, he will still make another pilgrimage to Sabarimala.