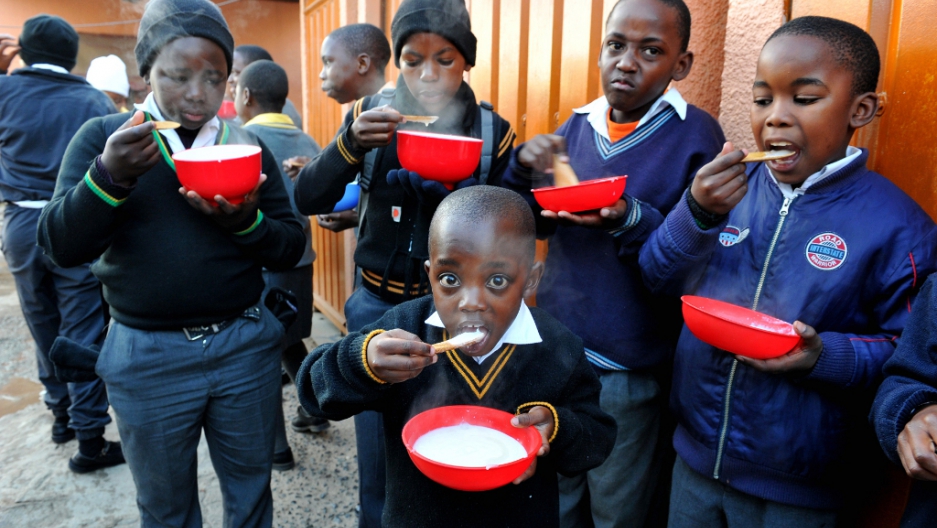 In this picture taken on May 17, 2012 some of the 100 children who have lost parents to AIDS in Alexandra township in the north of Johannesburg enjoy a bowl of piping hot corn meal porridge given to them by Mama Portia.
Credit: Alexander Joe
Share

JOHANNESBURG, South Africa — Obesity rates are skyrocketing in sub-Saharan Africa, as in most parts of the world.

But here the obesity problem has an unusual and particularly worrying shape.

While child hunger has traditionally been the more pressing problem in African countries, researchers say that malnourished, growth-stunted children are turning into overweight adults.

This means that countries still wracked by malnutrition, as well as infectious diseases such as malaria and HIV/AIDS, are facing a battery of chronic health problems such as diabetes and heart disease.

What’s more, new research has found that babies born to overweight or obese mothers are far more likely to die — a devastating problem in sub-Saharan African countries that already have some of the world’s highest infant mortality rates.

Dr. Zandile Mchiza, a senior scientist with the Medical Research Council of South Africa, said that research shows “undernutrition leads to obesity,” but the connection is not yet fully understood.

“As you grow up, if you were stunted at birth and then exposed to an abundance of food, you gain weight,” Mchiza said.

Factors such as food choices, genetics and social conditions all come into play, along with cultural beliefs — for example, that a woman must be chubby to be considered beautiful and healthy.

“People strive to overeat so they’re not labeled as poor,” she explained.

The paucity of data remains a significant problem, and so Mchiza has launched the Africa Taskforce on Obesity Research to link researchers from countries around sub-Saharan Africa, including Ghana and Kenya.

In South Africa, the most developed country in sub-Saharan Africa, 61 percent of adults are obese, according to research released last month by GlaxoSmithKline, the pharmaceutical company. The survey found that 78 percent of obese people considered themselves healthy.

While obesity rates in sub-Saharan Africa are for the most part still very low by global standards, they are projected to jump dramatically in the next two decades along with growing urbanization and development.

Medical experts are worried about the rise of obesity-related illnesses, such as heart attacks, strokes, hypertension and Type 2 diabetes. In many countries, health care systems are already overburdened and lacking in resources.

A study published in The Lancet, a medical journal, last month concluded that babies born to overweight and obese mothers “are markedly more likely to die.” Surprisingly, researchers detected no increase of neonatal death for the babies of underweight mothers.

More from GlobalPost: South Africans wonder, has freedom made us fat?

Lead author Jenny Cresswell and colleagues looked at figures from 27 sub-Saharan African countries in what they said was the first known study of its kind for the region.

In wealthier countries, babies born to overweight mothers are also more likely to die. But Cresswell noted that sub-Saharan Africa already has the highest rates of newborn death in the world, and it is “where the burden of neonatal mortality is greatest.”

“For many people, low-income countries are associated with images of starvation and hunger, yet obesity is a rapidly growing problem,” Cresswell wrote.

“Ongoing global shifts in diet towards the consumption of high-fat and high-sugar foods, coupled with urbanization and an increasingly sedentary lifestyle for many populations, are generating an upward shift in body-mass index.”

In a linked commentary for The Lancet, Ellen Nohr from Aarhus University in Denmark wrote that the findings of this study “force us to see the global burden of obesity on reproductive health in a new perspective.”

Nohr wrote that the “complications attributable to maternal obesity in low-income countries may far outnumber the burden seen in affluent countries.”