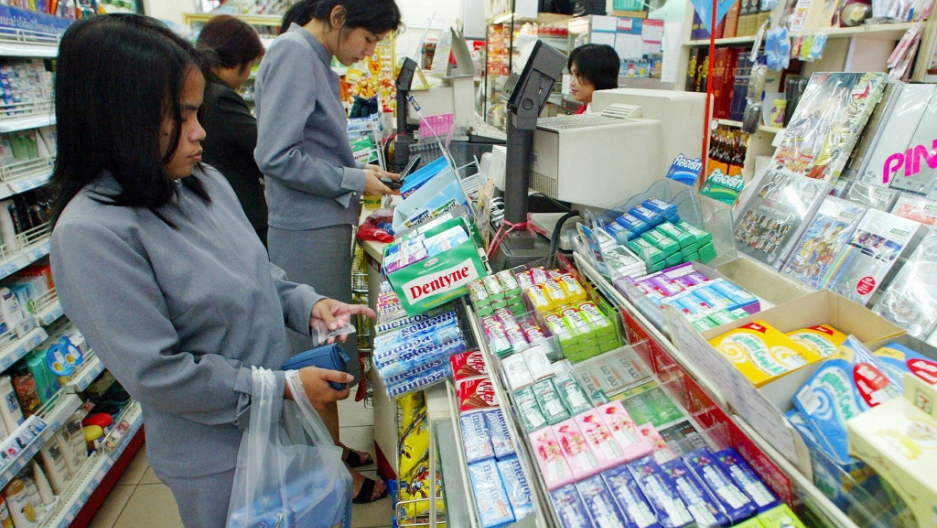 Thai customers shop at a 7-Eleven in Bangkok, Thailand. The chain's explosion in popularity worries many experts who see its products as contributors to growing obesity rates throughout Southeast Asia.
Credit: Saeed Khan
Share

BANGKOK, Thailand — Like many Thai teenagers, Khaotip Teesukha considers good food a birthright. Some of the best cuisine her culture has to offer — pungent soups and curries, chili-flecked papaya salads — are sold on almost every Bangkok street for the equivalent of one dollar.

What 19-year-old Khaotip categorizes as “good food,” however, may surprise you. Her typical breakfast is a microwaved square of white bread stuffed with processed ham and Crayola-yellow goopy cheese. Or occasionally a “Big Bite” hot dog wiener, sliced into bits, dumped into a plastic bag and eaten with a skewer. “It’s delicious,” she said.

The purveyor of these snacks is 7-Eleven, the Texas-born chain that has become an inextricable part of the landscape in Thailand and beyond. As the developing world’s pace of life more closely resembles the Western rat race, 7-Eleven is increasingly a source of instant, low-quality nourishment for Thais, Malaysians and Filipinos on the go.

“Going to 7-Eleven every day is unavoidable for most people,” said Khaotip, a university student. “If I’m in a hurry to avoid traffic, which is every day, I need food really fast. I just want something warm and filling.”

The omnipresence of 7-Eleven in Thailand is particularly striking. Thailand’s number of franchises, now at about 6,800 according to corporate reports, has become nearly neck-and-neck with the United States’ 6,900 shops — all while Thailand’s population stands at roughly one-fifth the size of America’s.

No corporate entity is so entrenched in Thai lives. The Thai 7-Eleven motto — “Your intimate friend, always close by” — rings true: Thai 7-Eleven shops have expanded by roughly 500 franchises per year and sometimes face each other from across Bangkok streets. The chorus of a popular Thai country song goes “I won’t be your 7-Eleven any more,” a female singer’s ultimatum to a lover who darts in and out of her life like a quickie mart shopper.

Across Southeast Asia, 7-Eleven’s empire is growing: 1,300 shops in Malaysia, where 7-Eleven is the No. 1 convenience store, and 700-plus in the Philippines. Indonesia’s small-but-growing stock of 70 shops are marketed to a fast-growing middle class: Jakarta franchises are sometimes outfitted with cafe decor and free wi-fi signals.

The shops often adapt to their local habitat. 7-Elevens in Muslim-majority Malaysia serve only halal foods. Philippine 7-Elevens stir goodwill by literally bringing light to run-down neighborhoods. A corporate memo describes how lighting fixtures in front of 7-Elevens “drove away drug addicts at formerly dark street corners” and “made the store a safe haven for young women alighting from commuter vehicles.”

But however convenient, 7-Eleven is also a major supplier of unhealthy food in a region getting fatter by the year.

Southeast Asian countries that have ascended to what the World Bank calls “upper-middle income” status — namely Thailand and Malaysia — are growing pudgier as they’re growing richer. According to World Health Organization statistics, about 30 percent of Thailand’s population is overweight as is 48 percent of Malaysia’s population. Even in the Philippines, where development stubbornly lags behind its regional neighbors, 25 percent of the country is considered overweight.

The rise in obesity rates is blamed on a host of factors: the prevalence of fast food, a declining agricultural society and motorized vehicles. But one of the biggest culprits is one of 7-Eleven’s best-selling products: sodas and sweet beverages, according to Thai dentist and researcher Chantana Ungchusak, a core member of the Thai government-aligned “Sweet Enough Network.” The network is specifically designed to curb soda addiction in young kids.

“The problem is that sugary products are sold everywhere, on every street. If you look at the market share of soda, it’s always increasing,” she said. An Asia Pacific Journal of Clinical Nutrition study found that Thai college students typically consume 17 teaspoons of sugar per day, mostly via soda. That figure falls in line with that of their counterparts in America. Doctors typically recommend no more than six teaspoons per day.

“For adults, it’s their liberty to do what they want and see any information they want,” Chantana said. “For children, they should do a better job of controlling the advertising.”

But health advocates are not only up against ad budgets of soda and candy giants, which often count 7-Elevens as their primary points of sale. They’re up against the pervasive influence of 7-Eleven itself.

In Thailand, 7-Eleven runs television ads around the clock. Savvy marketers have even devised a slapstick show called “Sausage Mansion” featuring non-stop product placement promoting 7-Eleven products with an emphasis on hot dogs. (Thai 7-Eleven franchises are controlled by an agro-conglomerate called Charoen Pokphand, which also owns industrial pork farms and a cable TV provider.) The show’s characters are given names such as “Soda” and “Sausage.”

Though 7-Eleven offers an easy whipping boy for Asian food purists, who fret that processed food is upending centuries of culinary tradition, few would equate cheap dumplings and frankfurters with home cooking.

“I would never compare it to mom’s food,” Khaotip said. “I wouldn’t even compare it to made-to-order street food. But it’s warm, tasty and I’m used to their sandwiches. I’ve never ordered a sandwich anywhere but 7-Eleven so I really don’t know the difference.”