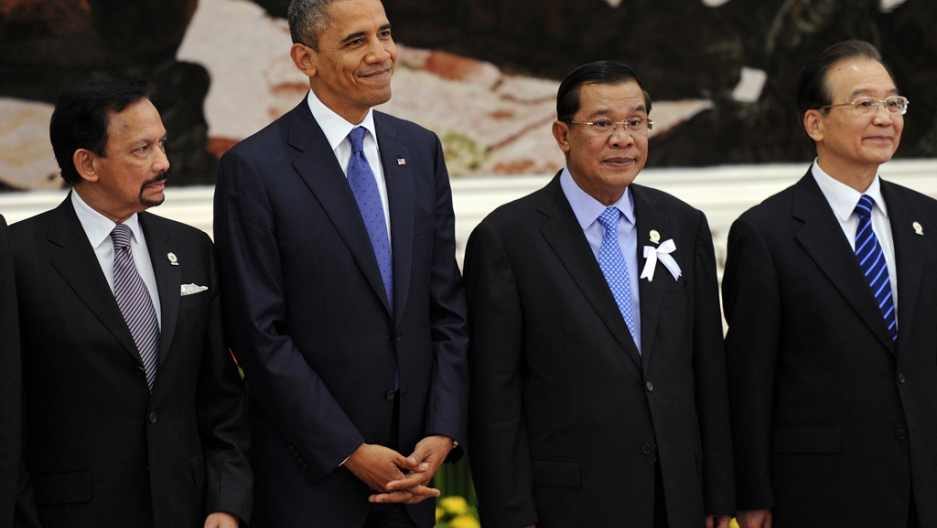 BANGKOK, Thailand — China’s largest claimed island in the disputed South China Sea, Yongxing, is just over half the size of New York’s Central Park. Its next-largest claim in the sea, Taiping Island, would fit inside Beijing’s Forbidden City palace with room to spare.

These outcroppings are crumbs peeking up from a vast abyss. Many are swallowed by waves at high tide. Yet many of the sea’s dribs and drabs of soil are the focus of a territorial dispute with ever-sinking odds of resolution.

This week's East Asia and Asean summits in Cambodia highlighted again the inability of the many countries involved to reach a consensus on how to reduce tensions. Chinese Premier Wen Jiabao fervently defended his country's claim to almost all of the sea, while Obama urged Asean to work cooperatively toward a solution but stopped short of backing smaller nations against China.

China’s chief rivals in the conflict are Vietnam and the Philippines, both trumped by Beijing’s military and diplomatic might. Both now contend that as China summons more villagers, troops, tourists and even aerial drones to these islands, the dispute appears more intractable by the day.

“We’d like to shake hands with China. But it’s difficult to shake hands when your foot is on my foot,” said Henry Bensurto Jr., secretary general of the Philippine Department of Foreign Affairs’ maritime commission.

“There is a saying ... if you’re being raped, maybe it’s good to just enjoy it,” Bensurto said. “We refuse to be like that.”

Both Vietnam and the Philippines claim dominion over large blocks of the sea extending off their shorelines. China, however, claims nearly the entire body of water. In July, it locked this zone into be a new prefecture named Sansha: a mere five square miles worth of actual land swimming in an aquatic zone larger than France.

"China's act of defending its sovereignty is necessary and legitimate," Chinese Premier Wen Jiabao said at this week's summit.

Much of this territory is far closer to either Vietnam or the Philippines than China’s mainland. But China’s claim rests not on proximity but on accounts of ancient mariners who got there first and occasionally left a few fishermen behind.

According to a Chinese government statement obtained by GlobalPost, the government has drawn upon “local chronicles” and ancient maps to determine that its seafarers reached these islands as early as the Han Dynasty (2nd-century BC) and no later than the Tang Dynasty in the late 8th century.

“They have been parts of China’s territory since ancient times,” according to the report. As for the yawning distance between these islands and China’s mainland turf, the report maintains that “many countries have territories which are far away from their home territory but are closer to other countries.”

Philippine or Vietnamese incursions onto these islands — sometimes situated less than an hour’s boat journey from their home terrain — are seen as “acts of invasion.” Both Vietnam and the Philippines insist that old maps don’t cut it.

“Some of these claims aren’t even generated from international law,” said Nguyen Thi Lan Anh, deputy director of Vietnam’s Center for South China Sea Studies. “They’re from historical titles. At least we need rules for this game. If no one knows the rules of the game, we can’t control the outcome.”

The driver behind this conflict is not dominion over sandy atolls jutting above the surf. These nations desire the resources that lie beneath the sea. According to China, the region is home to more than 200 billion barrels’ worth of untapped oil, an amount equal to 80 percent of Saudi Arabia’s acknowledged reserves.

Neither the Philippines or Vietnam have the money or tech savvy to conduct their own studies. “It’s just too costly and too expensive to do so at the moment,” Anh said. Still, Bensurto said, China’s citing of 1,000-year-old mariner routes is hardly a claim to the seabeds that hold all that oil.

“Is it possible,” he said, “for a country to actively claim historical title over a seabed in the Song Dynasty? Was there a submarine in the 11th century that allowed some entity to occupy property under the sea?”

Today, however, China does ply the sea with submarines. So does another lurker, the United States. Announced nuclear submarine visits to the Philippines, a longstanding ally and former US colony, are paired with forays by American surveillance ships near China’s new submarine bases in the region. In recent years, these missions have goaded China’s navy into surrounding US vessels — a message to get off Chinese turf.

China also uses airborne drones to maintain a gaze from above. Recently, the Philippines’ naval defense department threatened to shoot Chinese drones out of the sky. Recurring standoffs between Philippine and Chinese vessels at sea have revived anxiety over American intervention as the US is treaty-bound to protect the Philippines from foreign invasion.

But the South China Sea’s potential to become a new naval battlefield between the two major powers — China and the US — is still low, Bensurto said. “A very good plot in a very good movie,” he said, “but it’s not reality ... our hope is that these two superpowers will come together and find a way to stop this.”

Treaty or not, America can’t risk scrambling its relationship with China over this marine dispute, said Kavi Chongkittavorn, a senior fellow at the Institute of Strategic and International Studies at Thailand’s Chulalongkorn University.

“They have deep interdependency. They might not agree on everything but they will definitely not go into open conflict,” Kavi said. “The South China Sea is not the Middle East. The Philippines is not Israel.”

So far, China’s harshest rebukes of its rivals are voiced through government media. An op-ed in the state’s “China Internet Information Center” diminishes the Filipino and Vietnamese argument to a dishonest distraction technique: “To prevent the economic crisis from turning into social unrest, some neighboring countries chose to divert domestic tensions by hyping the so-called ‘China Threat’ and territorial disputes in the South China Sea.”

Both the Philippines and Vietnam are open to discussing joint-development projects that would benefit both China and their own governments. “The peace and stability of the region is in jeopardy,” Anh said. “We have to shelve the sovereignty dispute.”

But China, for now, appears unbudging. The government continues to promote cruise ship tourism to its claimed islands while also deploying troops and barreling ahead with oil-drilling projects in disputed terrain.

“We at least need rules of engagement so we’re able to avoid accidents with each other,” Bensurto said. “A protocol to make sure the guns pointed at each other don’t shoot.”

At the close of the Asean summit on Tuesday, they were no closer to this goal.