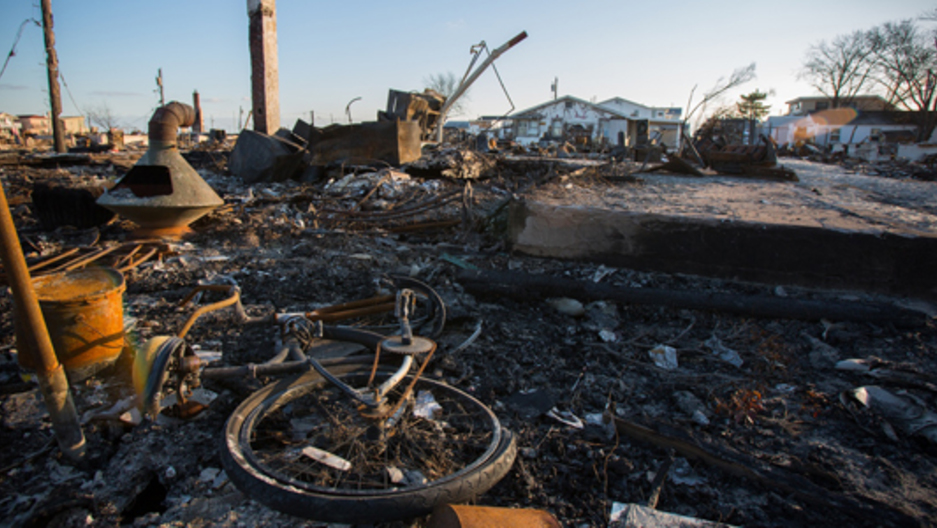 Hurricane Sandy's destruction has generated an estimated 12-million cubic yards of debris. Much of it still waiting to be cleared. (Photo: Sam Eaton)

In the wake of Hurricane Sandy, debate is again raging in the United States about the dangers of climate change. Now two high-profile reports warn that without big changes we're headed for catastrophic climate disruption. As part of our collaboration with the PBS program NOVA, we sent reporter Sam Eaton to New York to assess some of the challenges.

Stephen Wagner knows hurricane damage. He runs a flood restoration company and has been working in Louisiana since Hurricane Isaac slammed into the gulf coast last summer. When Sandy hit New York, he came straight to Breezy Point, a part of the city hardest hit by this fall's storm. Wagner says in terms of sheer size, Sandy "blew Katrina away… The surge, full moon, high tide when it came ashore, nine-foot storm surge. There's nothing that can stop it. Nothing."

Scientists are debating just how much of a role climate change may have played in Hurricane Sandy's devastation. But they generally agree that the storm was a glimpse of the future in a rapidly warming world.

For his part, Wagner says he's worked long enough cleaning up after storms to be convinced that that future is already here.

"Everything is getting bigger, coming later and moving slower, that's the menace," he says. "The slower they go, the more destruction there is."

Sandy drew global attention to the growing threats from climate change, and renewed the political debate over climate in the United States. But two new reports just out highlight the risk of those impacts becoming much, much worse in the coming decades.

The first came last week from the International Energy Agency, a Paris-based organization that advises industrialized nations on global energy policy and trends. The group issued a stark warning in its annual report: based on current energy trends, global CO2 emissions will push average temperatures up far beyond the two degrees Celsius limit that countries set to avoid the most dangerous impacts of climate change.

Then this week, the World Bank issued essentially the same warning: that we're headed for a world with average temperatures nearly four degrees Celsius hotter than today. In Fahrenheit that's a seven degree jump.

"There would be massive disruption in some of our most basic systems," Kim said. "Water supply, the viability of coastal cities, entire populations that live in low-lying areas. And the window is narrow. We've got to take action now.

The question, of course, is how. The energy agency report says in order to avoid catastrophic levels of warming the world will have to leave some two-thirds of its remaining fossil fuel reserves in the ground between now and 2050.

Others take it a step further, arguing that carbon emissions will have to drop by eighty percent.

However you describe the challenge, it would mean a radical shift in our energy use.

But the problem, according to Klaus Lackner of the Lenfest Center for Sustainable Energy at Columbia University, is that there are a billion people at the top in the world economy, and "nine billion people in the future who want to be in that same club. So that essentially makes energy consumption potentially ten times larger than it is today."

Lackner says the conventional view that economic growth is driven by the availability of cheap energy, mostly from fossil fuels, is still very much alive, a reality driven home by President Obama's comments last week that while dealing with climate change is a priority, he won't take any action that would harm economic growth or job creation.

"You have to convince people that a solution exists, which I don't think has happened yet. And that the solution is affordable. And that it's worth spending that amount of money."

Lackner is pessimistic about our ability to meet that challenge. But others say there are historic precedents.

Ben Orlove, of Columbia's Climate and Society program, points out that in the 19th century, many countries finally refused to accept goods made with slave labor, even though they were cheaper. "They just decided it was inhuman," Orlove says.

"People would not accept products that were produced by child labor," Orlove says. "And we also respect the products produced with certain environmental standards. So I think there's the hope that we could extend these agreements into the energy field."

And some solutions do exist.

Renewable energy is surging around the world, while costs are plunging. Nuclear power, though tainted after Japan's Fukushima meltdown, is still a low carbon option. Meanwhile, the International Energy Agency report says there are huge opportunities to cut energy use.

Fatih Birol, the agency's chief economist, says the growth of global energy demand could be cut in half through greater efficiency, using only existing technologies "and pushing the button of the measures which make complete economic sense."

Progress is even slower for a fourth approach to reining in greenhouse gases, technologies to capture and store carbon.

That's something Columbia University's Lackner hopes to change. Lackner has a whole lab filled with machines that he hopes could someday cheaply suck carbon dioxide straight out of the air and store it underground. There are prototypes for fake trees and huge sails made of material that would soak up CO2.

Researchers around the world are working on similar technology. But many say so long as there's no broad economic penalty for carbon pollution, there'll be little incentive to adopt technologies like this.

"What's still lacking is the political will to solve the problem," Lackner says. "And I think that will require a change in attitude, that people actually see that the risks of not doing anything are starting to get big. The question is, when do we believe that it hurts enough that we will do something about it?"

With Sandy's wreckage still piled across the coasts of New York and New Jersey, many people are saying that moment may finally have come, at least in the United States. But it's no sure thing. Memories fade, and long-established ways of life can be extremely resistant to change.

Back in Breezy Point, Maureen Logar says even after Sandy badly damaged her home, climate change isn't something she worries about.

"We've had other storms too," Maureen says. "We don't really think about it. We've gotten water. Not ever as bad as this, and hopefully we won't have for another 70 to 80 years. And not at least in my time, my kids time. But it's not going to change the way we're living now. It can't. You know, you live for today."