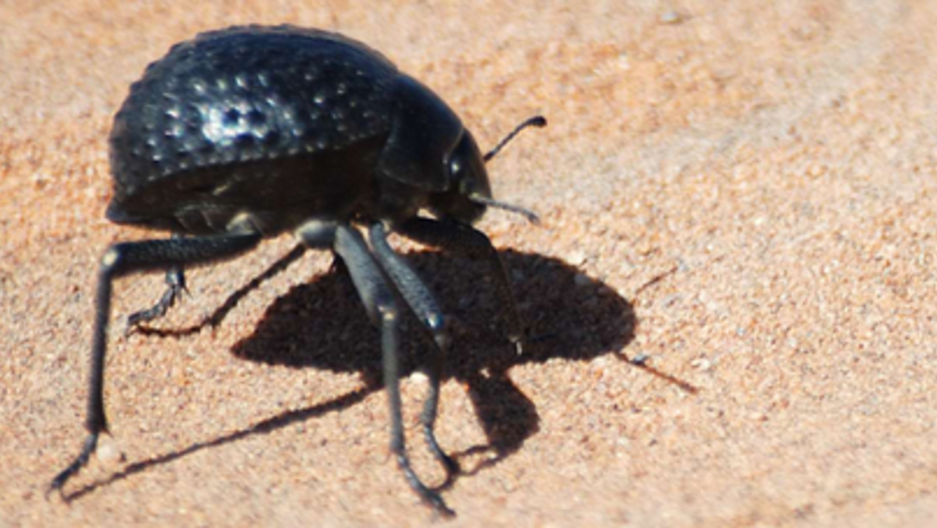 This Namib Desert beetle is the inspiration for a new self-filling water bottle. (Photo by Moongateclimber via Wikimedia Commons.)

The lessons of nature have paid off in some remarkable products already — think airplanes, or Velcro, for example.

A unique water harvesting beetle, however, inspired Deckard Sorensen to start a business. This beetle, the Namib desert beetle, lives in an area that only gets half an inch of rainfall per year, he explained.

"Every morning this beetle climbs to the top of a sand dune, sticks its back to the wind, and drinks 12 percent of its weight in water," he said. "We use nanotechnology to mimic this beetle’s back so that we too can pull water from the air."

On the beetle, water condenses in specific, hydrophilic areas of the bug's back. Eventually, they flow to a storage area on the beetle.

Sorenson says with more than three quadrillion gallons of water in the air, this is an incredibly rich source of a very scarce resource.

To convert the beetle's natural ability into human-usable technology, Sorenson coated a surface with hydrophilic and hydrophobic coatings, and then uses a fan to pass air over the surface. The water condenses on the surface and, eventually, Sorenson has created a self-filling water bottle.

"We see this being applicable to anything from marathon runners to people in third-world countries, because we realize that water is such a large issue in the world today, and we want to try to alleviate those problems with a cost-efficient solution," he said.

Sorenson's company is also investigating how this might be used with plants, essentially boosting the amount of moisture they can pull from the air.

"We are looking to incorporate this in greenhouses or green roofs in the immediate future, and then later on, we’re looking to see how far we can really scale this up to supply maybe farms or larger agricultural goals," Sorenson said.

And while it requires energy, Sorenson insists it's not much at all. He said all of their tests how been powered by solar cells and a rechargeable battery.

If the device were affixed to a car or a boat, or even a running human, it might not even need that power supply to move the air over the specially coated surface.

"We actually see the maritime environment as really a very large market for us because humidity is actually constantly regenerated over a large body of water," Sorenson explained. "Then we can pull that humidity from the air to support people who possibly take long trips on yachts, or provide a sort of potable water source that can be run off a solar panel while at sea."

Sorenson hopes to bring his water bottle to market by 2014.