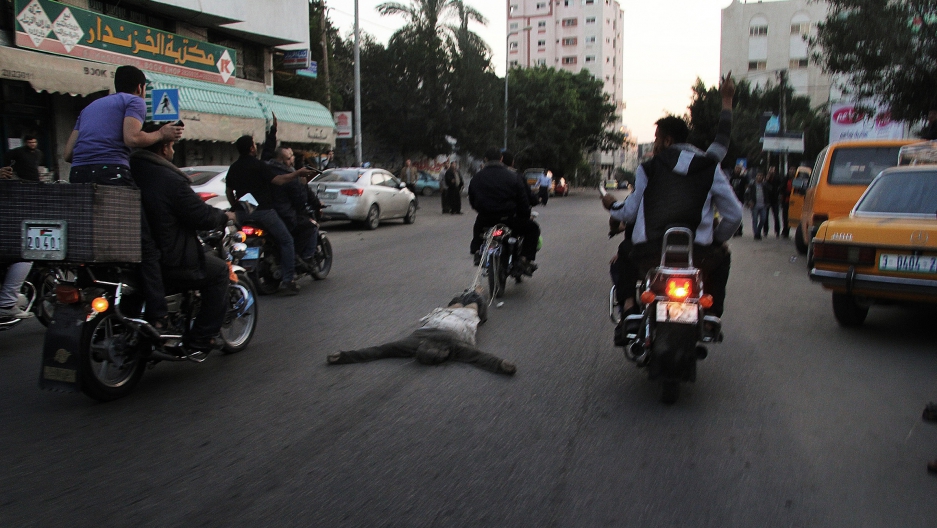 Palestinian men on a motorcycle drag the body of a man who was killed for allegedly collaborating with Israel, in Gaza City, on November 20, 2012.
Share

Graphic images have emerged purporting to show a lynch mob dragging the body of an alleged Israeli spy through the streets of Gaza.

The men on the bikes are militants believed to be from the Ezzedine al-Qassam Brigade — Hamas' armed wing — who publicly executed six men accused of collaborating with Israel, Australia's Fairfax media reported.

Photos published by several news media show a corpse tied to the back of a motorcycle being dragged through central Gaza City, pants pulled down and arms splayed.

Reuters, one of the news agencies that released the photos, cited the Hamas Aqsa radio as saying the six men "possessed hi-tech equipment and filming equipment to take footage of positions."

They had been "caught red-handed," working for Israel, and so were executed.

According to the Associated Press, who also photographed the grisly spectacle, masked Hamas gunmen had forced the six men suspected of collaborating with Israel to lie face down on the street, then shot them dead.

Later, while an angry mob stomped and spat on five of the bodies, the sixth was tied to the back of a motorcycle.

“Spy! Spy!” the people screamed as the corpse was dragged off.

More from GlobalPost: Gaza: The conflict heard round the world

YNet News cited an eyewitness as saying that shortly after the shooting, about 100 men surrounded the man and covered his head with plastic bags.

"There were children on the street; they should have done it somewhere further away," he reportedly said.

According to Human Rights Watch, Hamas has executed at least 11 men since taking control of Gaza in 2007.

At least five were executed after convictions by military courts, which according to HRW made their convictions based on evidence obtained under torture.

The Palestinian Authority in the West Bank, meantime, has issued death sentences but has not carried any out executions since 2005.

The Fairfax media, meantime, cited a message reportedly pinned to the bodies that read:

"Al-Qassam Brigades announces the execution of the traitors [who] contributed to the martyrdom of many fighters by reporting their position… and giving the enemy information about the movement of the fighters."