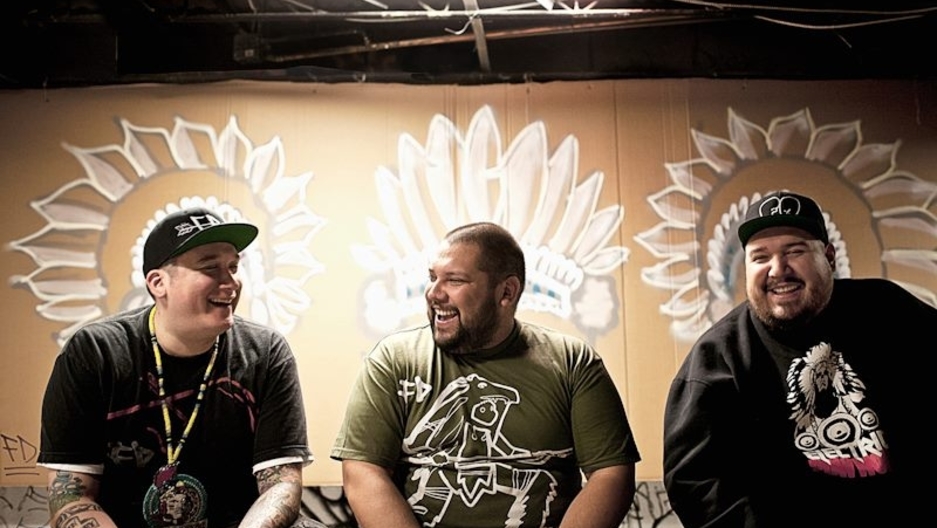 Share
It's the second Saturday of the month, Electric Pow Wow night, at Ottawa's trendy Babylon club. The line to get in snakes down the block. Inside, A Tribe Called Red's three DJs – NDN, Bear Witness, and Shub – warm up the crowd with a mix of dancehall and hip hop. Brittany Jones and Marissa Martin sip cocktails in a cozy booth. They're both native, Chippewa and Mi'kmaq, respectively. They say the Electric Pow Wow is special for aboriginal people, particularly for students far from their homes and tribes. Martin says this is because "when you're going to a regular club, you're not really represented." Brittany Jones adds, "You know that coming here, you're going to see a lot of aboriginal people, so it makes it a sense of comfort, family, friends. You know you're going to see people that you know." But the best part, they say, is when the pow wow beats come on. It's really a new genre of music. It's a party pow wow. A Tribe Called Red calls it "pow wow step," and sure enough, the first mix of it they play, people jam the dance floor. It's so loud, the singing so powerful, the bass so deep and wobbly, the fabric on your clothes actually vibrates. It's dizzying. A Tribe Called Red's Ian Compeau, also known as DJ NDN, sang in a pow wow group when he was a kid in the Nippising First Nation, north of Toronto. He says many young aboriginal people bring that shared experience to the Electric Pow Wow. "It's a place where you meet people," he says, "It's a place where you dance. It's a place where you share songs. It's the same as a pow wow. It just so happens that it's in an urban setting and a modern setting, it takes place in a club." A Tribe Called Red's name gives a nod to hip hop pioneers, A Tribe Called Quest. The "red" part represents indigenous people on the traditional medicine wheel. The band started when Compeau and Bear Witness were DJ-ing in the same club about five years ago. Bear Witness says, "My East Indian friends would have their "Brown Parties." "Brown parties" is what they'd call it. There was Korean parties. There were all these culturally significant parties they'd have. I realized that they really didn't have any representation like that for the aboriginal population in the city, so we just kinda wanted to throw one for that." Compeau took a loop from a pow wow song. Bear Witness put a beat under it and that's when it all clicked. "It was the reaction from the aboriginal people in the crowd, where they'd take over the dance floor," Bear Witness explains, "This is us now. It was like, we're gonna push everybody back and take over that space, which is something you don't see come out of the aboriginal community enough." A Tribe Called Red roots its music in indigenous politics. That comes out sharpest in videos Bear Witness produces and projects at some shows. The video "NDNs in All Directions" mashes up a Jamaican dancehall tune called "Scalp Dem" with an old British TV variety show. Compeau says the images show white people dancing in stereotypical Indian costumes and "so there's nothing really aboriginal about it, except we're remixing it. Now we're decolonizing these images and these songs and we're taking that power back ourselves." Two years ago, Compeau and Bear Witness brought on Dan General aka DJ Shub, a two-time Canadian turntable battle champion. A Tribe Called Red's drawing all kinds of people now. They have a new album they're giving away for free. They want to spread the Electric Pow Wows across Canada, continuing the process of carrying a cultural anchor into the DJ era.