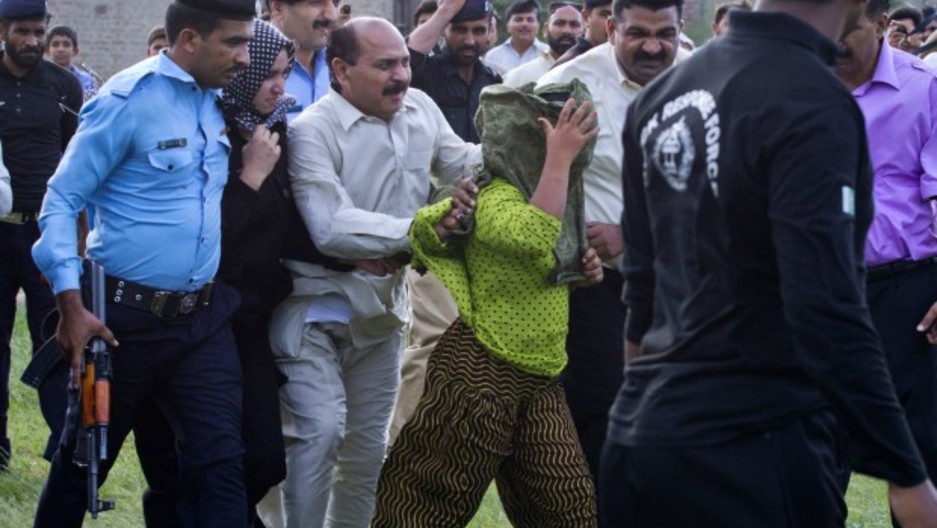 Security officials surrounding Rimsha Masih, (C, green scarf) a Christian girl accused of blasphemy, move her to a helicopter after her release from Adyala jail in Rawalpindi September 8, 2012. A Pakistani military helicopter plucked a young Christian girl accused of blasphemy from a prison yard on Saturday and flew her to a secret location after she was granted bail. Live broadcasts showed heavily-armed police surrounding Rimsha Masih, believed to be no older than 14, covering her face with a green scarf as she walked to the helicopter. REUTERS/Stringer (PAKISTAN - Tags: CIVIL UNREST CRIME LAW TPX IMAGES OF THE DAY)

Share
On Tuesday, a high court judge in Islamabad dropped a blasphemy case against a Christian girl. In August, a Muslim cleric had accused 14-year-old Rimsha of burning pages from an Islamic children's textbook. He was later believed to have burned the pages himself. The girl seems to be suffering from some degree of mental impairment. She was jailed for three weeks and released on bail in September. She and her family have been in hiding under government protection ever since. Correspondent Fahad Desmukh in Karachi says the judge said there just wasn't any evidence to convict her.