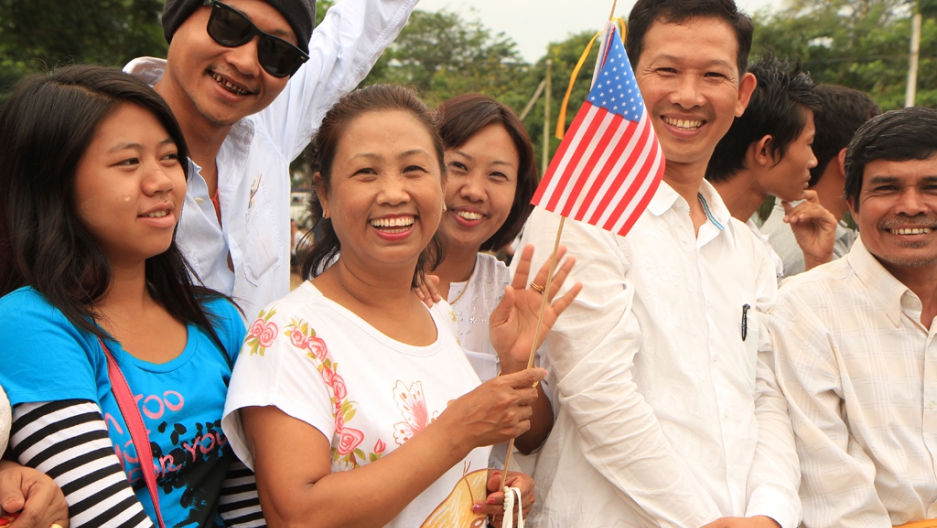 YANGON — Longyi-clad onlookers lined the streets of Yangon on Monday, eager to catch a glimpse of the President of the United States as he arrived on a historic first visit to Myanmar. Many wore Obama T-shirts; others donned the peacock logo of Daw Aung San Suu Kyi's NLD.

Two stony-faced and silent men, flanked by a police officer, held a banner bearing the faces of Aung San Suu Kyi, Obama, and Myanmar President Thein Sein. Nearby, others jubilantly waved US flags and newspaper clippings.

One man identified himself as a member of Myanmar's famous '88 generation of student protesters, pointing proudly to his NLD pin. "I love Obama!" he said.

Few wished to be identified by name in the presence of so many uneasy-looking police officers, but one thing was clear about many of the onlookers: they liked Obama a lot, and they wanted to welcome him as best they could.

As the doors of Yangon University opened to admit onlookers, line upon line of people in rainbow-hued longyis arrived to hear the US president speak — on the heels of the appointment of Derek Mitchell, the first US Ambassador to Myanmar, also known as Burma, in 22 years.

Obama's choice of Yangon University was a symbolic one, some said: the central university was all but shuttered in the 1990s following student protests, but extensively restored for the President's visit. Now, the government may allow the school to re-open, bringing new life to the moldering grounds.

"The Rohingya hold within themselves the same dignity you do, and I do," said the President, referring pointedly to ongoing Buddhist-on-Muslim clashes.

"Every human being within your borders is part of your nation's story, and you should embrace that," he added.

These themes seemed to hit home for the Myanmar audience, who fanned out onto the grounds after the speech's end.

Present for the speech was Dr. Tu Ja, an ethnically Kachin political leader hailing from Burma's northernmost state, where civil war has raged against Myanmar's central government for years.

The colorfully-dressed Tu Ja said he thought Obama's talk was "essential for our country, and a very important speech." Perhaps unsurprisingly, the political leader was most taken with Obama's stress on national reconciliation.

"Unless there is not peace, you cannot develop the country," he observed. "We need peace, peace and national reconciliation. We need to stop the civil war, and stop all the conflicts."

"We need to learn from the United States a lot," added Tu Ja.

Tu Ja's optimism was echoed by Kohtet Aung, a founder of the Myanmar Youth Union, a group dedicated to mobilizing young Myanmar activists.

"After listening, we know that we can have a better future," said Aung.

Even Yangon's hard-bitten taxi drivers got into the presidential act.

On the way back to town, this reporter's driver produced an American flag from the glovebox and waved it merrily at passersby.