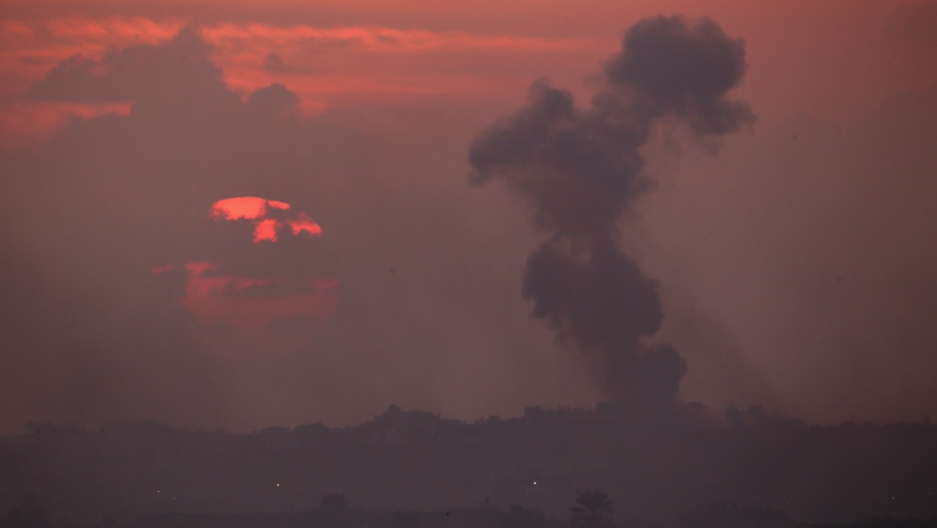 A plume of smoke rises above Gaza City at sunset after an Israeli airstrike on Nov. 19, 2012.
Credit: Uriel Sinai
Share

GAZA CITY, Gaza — The death toll from a punishing Israeli offensive in the Gaza Strip reached 100 Monday night, making it the deadliest day of the conflict according to the Hamas-run Gaza health ministry, and deepening a six-day-long crisis that shows no sign of relenting.

Gazans, who are essentially trapped by a blockade, say they feel nowhere is safe, not even their own homes.

Israeli warplanes and naval gunships pounded hundreds of targets — including police stations, homes and moving cars — across the Gaza Strip on Sunday night and throughout the day on Monday, which was shaping up to be one of the deadliest days of the conflict so far.

Gaza militants fired a number of rockets into Israel on Monday, but not nearly as many as previous days. It was unclear whether that was because the Israeli strikes were working to deter the militants, or because a potential cease-fire was in the making.

Hundreds of mourners on Monday buried the victims of an earlier Israeli airstrike that killed at least eight members of the same family — the Al Dalu family — including women and children, in the Jabalia refugee camp north of Gaza City.

“We will sacrifice for the land. We will not care about their aggression,” a Palestinian man giving a eulogy at one of the burial sites said. “We have to remember Allah. We must fear our God.”

But not even a funeral was safe in this cramped, pummeled enclave, where shops are shuttered and roads are deserted for fear of attacks.

As hundreds of men carried on their shoulders the bodies of two Al Dalu children, their limp, bruised frames jerking with each step, an Israeli airstrike nearby clapped like a roll of thunder against the hilltop cemetery, sending a gray pillar of smoke high into the sky.

Later, two rockets launched from Gaza toward Israel left arcs of white smoke and cries of “Allahu akhbar,” or “God is great,” in their wake.

Of the 109 killed so far, 26 are children and 11 are women, health officials here said. It is unclear how many of the casualties include fighters, although another 850 people are injured, including 280 children and 140 women.

“They were children inside the home, they were not fighting. Why did they kill them?” said an emotional Kamal Al Dalu, a 60-year-old cousin of the man whose entire family was wiped out in the strike. “Even if we put a tent where the house was, they would strike us again. They know the people there are civilians.”

But having hit 1,350 targets across Gaza since the offensive kicked off on Nov. 14, the operation widened to include strikes on civil and administration buildings, including the prime minister’s office.

On Monday afternoon, an Israeli rocket attack struck for the second time the Al Shorouk building in the heart of Gaza city. The building hosts several media outlets.

But for all the military technology, the human cost of Israel’s operation is mounting, even as Egypt attempts to broker a cease-fire between Israel and Hamas, the rulers of Gaza.

The chunks of inhabited land north of Gaza City, and the farmland dotted with villages in the east, are bearing the brunt of the assault. Strikes there hit every few minutes, locals say.

In Deir Al Balah, a smaller town and refugee camp south of Gaza City, residents say that on Saturday morning they dug out Raed Ibrahim Abu Amra, 35, and his wife, Islam Abu Amra, and their son, from beneath the rubble of their home, which collapsed and was buried with sand from an airstrike on an empty lot nearby. They were injured but survived.

At Al Shifa Hospital in Gaza City, 17-year-old Kafeh Thaer struggled to catch her breath after suffering a massive panic attack. She was reacting to a strike by an Israeli fighter jet that collapsed her neighbor’s home in east Gaza Monday morning. Her mother clutched her hand as medics struggled to help.

“The majority of cases we’re getting are fractures, or [internal] trauma from shrapnel wounds,” said Hammam Alloh, a medic at Al Shifa.

Even as the wounded poured into the hospital Monday evening, the blast of a nearby Israeli strike rocked the compound, a sure-sign more casualties were likely to arrive.

“Today, they took two of our family [to the grave],” said Abdul Aziz Ibrahim Bashir, a village elder in Deir Al Balah. “Tomorrow, maybe they’ll take me. There is nowhere safe. Are we safe here?”