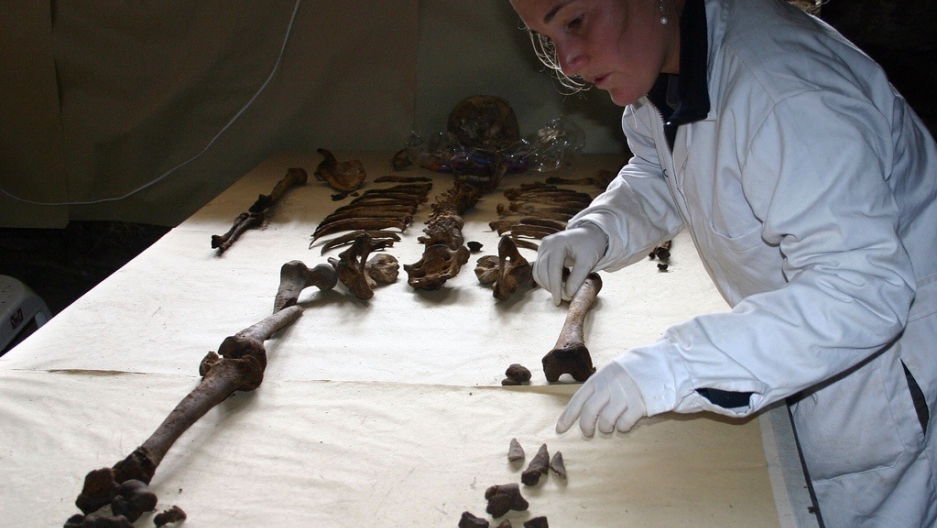 Remains from a mass grave in Peru's region of Ayacucho. A truth and reconciliation report said 123 people were massacred and buried in the town of Putis. Victims' relatives said men, women and children were murdered by the Peruvian Army in December 1984 under false accusations of being sympathetic to the Shining Path.
Credit: Hugo Ned
Share

Pushing the group’s fundamentalist agenda and calling for the release of those convicted of terrorism, the Movement for Amnesty and Fundamental Rights (MOVADEF, as it is known here) is winning adherents among a new generation with no memories of the horrors of the 1980s and early 1990s.

The movement started in 2009, claiming to be against “globalization” and “imperialism” and seeking to take advantage of unrest among the poor. It is now increasingly drawing support from those who believe that President Ollanta Humala, elected in 2011, has betrayed campaign promises to help them.

It has made inroads in Peru’s universities and unions, most notably SUTEP, the teachers’ union. This year it attempted to register as a political party, only to be rejected by electoral authorities on the grounds that it was “not committed” to democracy.

But that ruling did not come until after MOVADEF claimed to have mustered 355,000 signatures to support its political registration. Prosecutors are now investigating claims the group used deceit to garner some of those signatures.

Alfredo Crespo, MOVADEF's principal spokesman and deputy leader, insists the movement is separate from the rebels and that it rejects violence.

But his own background appears to belie that claim. Crespo served 12 years behind bars for terrorism offenses and is defense lawyer to Abimael Guzman, the Shining Path’s reviled leader, who has never expressed any remorse for the bloodshed.

“The constitution does not say that a Marxist cannot participate in elections,” he told GlobalPost in his cramped office in downtown Lima, claiming that his group is suffering “political persecution.”

Yet as Crespo talks, it rapidly becomes clear why so many in Peru both loathe and fear MOVADEF — and why there is growing concern at its gathering momentum.

In Crespo’s parallel reality, the Shining Path bears no responsibility for the 69,280 deaths documented in the vicious civil war it launched against a democratic system.

Echoing Guzman’s refusal to apologize, at no point during the interview does Crespo express contrition for the thousands of victims, largely impoverished indigenous Andeans who barely spoke Spanish.

The closest he comes is in repeating the guerrilla leader’s description of the Lucanamarca massacre — named after the remote mountain village whose 69 residents were wiped out in April 1983 — as a “military excess.”

According to Peru’s official truth and reconciliation report, the rebels used machetes, axes and even boiling water to kill the victims, who included a 6-month-old baby, not to mention pregnant women, elderly and 17 other children.

“Regarding the baby, that was not proven,” interjects Crespo, as he discusses Lucanamarca, claiming that the infanticide was not supported by the evidence in Guzman’s trial.

That lawyerly objection is typical of Crespo’s nitpicking discourse as he seeks to justify the actions of Latin America’s equivalent of Cambodia’s brutal Khmer Rouge, while glaringly evading any moral recognition of its heinous crimes.

“You would have to ask Abimael Guzman that,” he responds frequently to questions such as why it was necessary to kill children, or whether his client, a former philosophy professor, regrets the slaughter.

Asking Guzman is an unlikely possibility. Since his arrest 20 years ago and subsequent sentencing to life for aggravated terrorism and murder, the Shining Path founder and chief ideologue has never been permitted an interview with a journalist.

As the leader of a group often viewed as one of the world’s most malevolent terrorist outfits, Guzman, who is kept in solitary confinement, also understands that he is destined to die behind bars, Crespo admits.

But despite his refusal to acknowledge the Shining Path’s nihilistic savagery, Crespo is demanding “national reconciliation” — in other words, amnesty for his client. That, despite the fact that Peru has already undergone an official truth and reconciliation process, resulting in the thick report whose findings he dismisses with contempt.

For the record, the report, authored by a team of academics, journalists, lawyers and human rights experts, directly blamed Shining Path for 31,331 deaths, or roughly 46 percent of the conflict’s total toll.

Most of the other killings were attributed to the police and army, as they responded to Shining Path with a dirty war that frequently targeted innocent civilians. A small share of the slayings was blamed on other rebel groups.

Yet Crespo first says the figure is exaggerated and then claims the soldiers and police were responsible for “98 percent” of the fatalities.

But perhaps the most glaring twisting of history is his justification of Shining Path’s senseless mass murder as “political” — ignoring the elemental fact that Peru had just returned to democracy at the time when the group declared war on the state.

“[Shining Path] was a political organization with an ideology, a program, and its objective, to take power by rising up in arms,” he says without batting an eyelid.

That kind of rhetorical deceit has left lawmakers here pondering how to defend democracy from fanatical enemies apparently intent on using democratic privileges to attack it from within.

One answer has been a controversial government bill — based on Germany’s ban on denying the Holocaust — that would make it a crime to dispute the horrors committed by Shining Path.

Yet the proposed legislation has been criticized for failing to cover the killings by the army and police, and for clumsily allowing MOVADEF to position itself as martyrs to political persecution.

Now, as the movement continues to agitate for the release of Guzman and his murderous followers, democrats here of all political stripes are wondering what it will take to finally lay the ghost of Shining Path to rest.