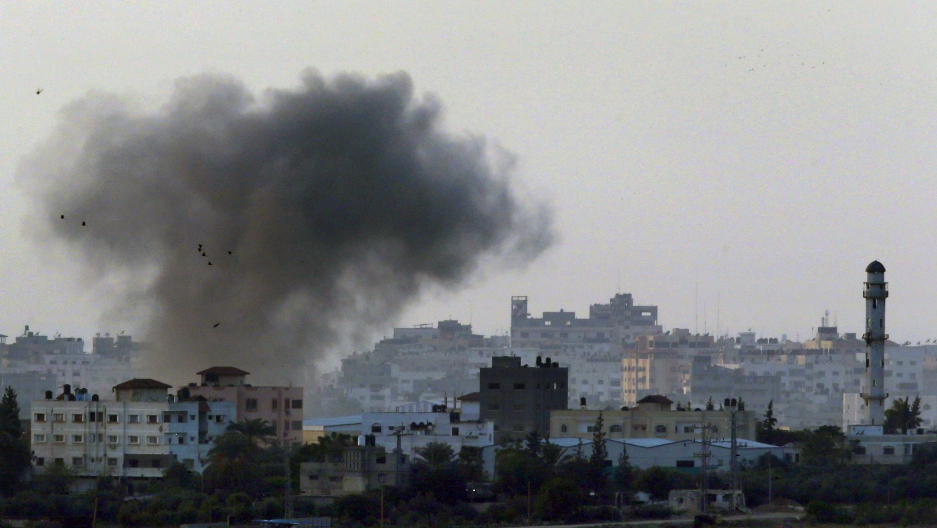 Black smoke rises after an Israeli air strike in the central Gaza Strip Nov. 19, 2012. Israel bombed dozens of targets in Gaza on Monday and said that while it was prepared to step up its offensive by sending in troops, it preferred a diplomatic solution.

The death toll from fighting between Israel and Hamas continues to rise.

According to the Palestinian Health Ministry and The New York Times, the death toll in Palestine had reached 91 as of Monday. Three Israelis have been killed since the beginning of the conflict.

Many of the Palestinian deaths have been women and children.

And while it's one thing to watch the violence up close, it's entirely different to be a Palestinian watching the crisis from afar.

Lena Ibrahim is a first generation Palestinian-American, and self-described activist, who still has ties to the Gaza area.

Ibrahim said the situation in the Gaza Strip had been very quiet up until the Israeli intervention.

"When I heard of the attacks, it became very disturbing, to see it happen from my computer screen, and to be so helpless," she said.

Israel insists that the operation will continue until no more rockets fall on Israel. There's even talk of expanding the Israeli attack into a ground offensive.

Avital Leibovich, the spokeswoman for Israel's military, said the Israeli military will keep moving so long as rockets continue to be fired from Gaza.

"The equation really is very clear. When it (is) quiet in Israel, it will be quiet in Gaza," she said.

Many of Ibrahim's friends still live in Gaza. She has been following their updates on Twitter, as Israel continues its attack. Monday afternoon, they struck a media building in Gaza, where they say Hamas leaders had been hiding out.

"I don't justify by any means the Hamas rockets, but I do understand the resistance in Gaza," she said. "People in Gaza feel very hopeless, and they feel very angry. I think when they look at Hamas, they see some form of resistance that might lead them to liberation, because it's forceful."