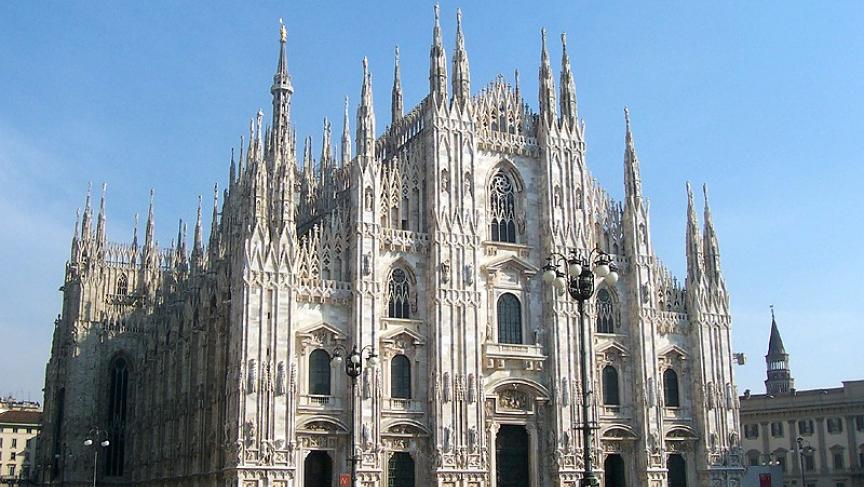 Milan's Duomo Cathedral is getting necessary repairs, thanks to an innovative scheme to raise funds. (Photo by MarkusMark via Wikimedia Commons.)

The Duomo Cathedral is a European architectural gem, a majestic, gothic cathedral in Milan, Italy.

It’s the sort of building you don’t forget once you’ve seen it up close.

“The cathedral has more than 135 spires at the top of it. It’s surrounded by 3,500 statues so its known all around the world,” said Angelo Caloia, president of the Duomo Cathedral of Milan

The tallest spire is topped by a golden statue of the Madonna. Visitors who climb to the roof can look at all the spires up close.

On a clear day, they can see the Swiss Alps from there, too. But Milan’s cultural landmark is in need of some renovation and a major cleaning. Air pollution and foggy weather has taken a toll on the white marble.

So cathedral authorities have come up with a clever way to hopefully raise $30 million for the renovation: Adotta una guglia or “Adopt a spire”

“To adopt a spire you can simply give a contribution. The minimum is 100,000 euros. And you can have your name, the name of your family, written at the base of the spire for the all eternity,” Caloia said.

The Gothic cathedral has 135 tall spires. Caloia says some are more desirable than others, though.

“Obviously if you want to donate more you are entitled to a spire which is near to the Madonna, the Madonnina,” he said.

The golden Madonna stands 350 feet up atop the cathedral’s main spire. It looks down on the five million tourists who visit each year.

“You cannot imagine how wonderful the view is, especially on the sunset you can see the Alps. The panorama of Milan and surrounding towns is a real, marvelous view,” Caloia said.

The Adopt a Spire campaign is just getting off the ground; contributions have come in for eight spires so far. In fact the spires representing the four human virtues of wisdom, justice, strength and temperance are not yet taken.

Novelist Mark Twain visited the Duomo Cathedral once and was told it was second only to Rome’s Saint Peter’s Basilica.

But Twain wrote that he couldn’t “understand how it can be second to anything made by human hands.”

As for more affordable options, since the spires start at the equivalent of $128,000, Canoia says they may consider putting gargoyles up for adoption for lesser amounts, he said.