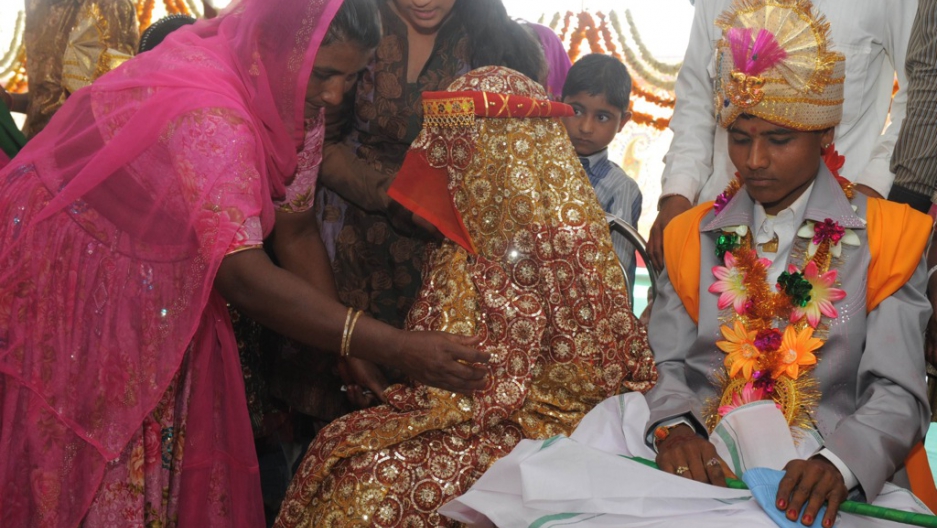 A relative (L) comforts a bride as she participates in a mass marriage in the village of Vadia, some 210kms north of Ahmedabad late March 11, 2012.
Credit: SAM PANTHAKY
Share

A spike in cases of human trafficking during the leadup to Diwali reveals a disturbing truth about the Mewat region of the western Indian state of Rajasthan. Because of a badly skewed gender ratio, families have taken to buying young girls for marriage to older men around the occasion of "Dev Uthani Ekadashi"--considered an auspicious day.

According to the Times of India, earlier this month police in Alwar arrested two men and rescued three girls who were to be sold on Diwali and married off to much older men, and police records show a rise in human trafficking cases over the months leading up to the holiday.

The crime takes place practically on Delhi's doorstep, too -- with the backdrop of a bird sanctuary in Bharatpur that is frequented by countless tourists each year.

Bharatpur's Sevar police had on November 12 raided a house in Ludhavai village and arrested two "agents," the Times of India said. Cops also rescued three girls being kept captive there. "Two men - Supriya Kumar and Mukesh Upadhyaya — had purchased the girls from one Laxman Jat. The girls were residents of Jabalpur district in MP. The girls say they were lured to Bharatpur on the pretext of a religious fair. The agents later confined them and told them they would be sent to their in-laws on Diwali," said Sevar SHO Akhilesh Kumar.

As GlobalPost has reported, India faces an ever more severe problem with a skewed gender ratio, as rich and poor alike choose to abort baby girls, who are deemed to be undesirable.

Meanwhile, as India develops and its middle class grows, the aborting of female fetuses is becoming more common. India’s 2011 census showed that the country’s child sex ratio, the number of girls to boys under age 7, is the worst it has been since India gained independence in 1947.

A natural sex ratio is 105 boys born for every 100 girls. This is to adjust for girls’ slightly higher likelihood of surviving than boys. However, India’s 2011 census showed that the sex ratio for children under age seven is 109 to 100. While not ostensibly a large difference, that ratio equates to 7 million fewer girls than boys under the age of 7 in India, which is home to 1.2 billion people.

In Mewat, it's resulting in human trafficking. In Haryana, it has been blamed (perhaps in an oversimplification) for a swath of recent rapes. And in several states with deeply held patriarchal views on the status of women--brides now have to be imported from others, like Kerala, where the gender ratio is more equitable.

The trafficking of brides across the country puts these women at risk because they become isolated and more vulnerable to abuse, women’s-rights activist Ranjana Kumari told GlobalPost last year. The women also come from different cultural backgrounds and therefore struggle to adapt to their new village’s dietary habits and customs, she said.

Obviously, matters only get worse when they're sold off to an old geezer.