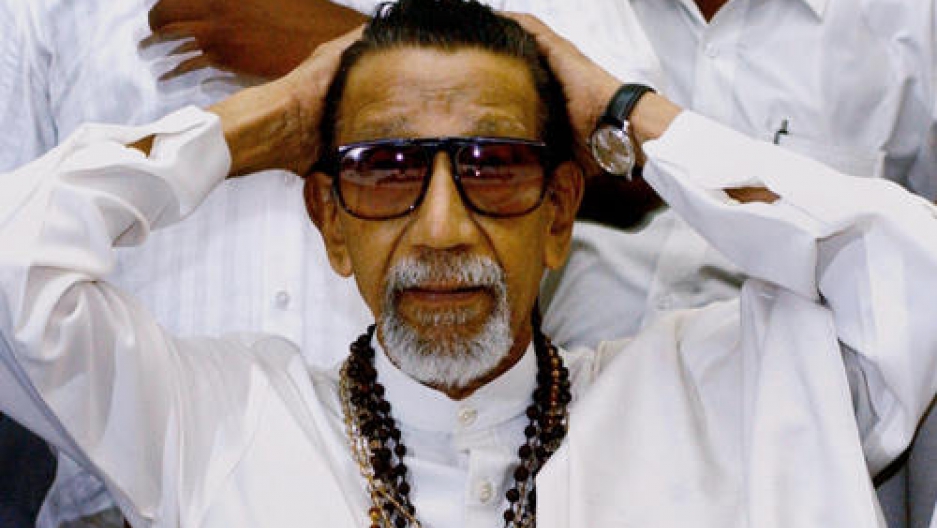 Once upon a time, Bal Thackeray, chief of the Shiv Sena, held Mumbai in an iron fist. Now the Shiv Sena looks to be in "terminal decline," according to Open Magazine's Haima Deshpande.
Share

Police in India have arrested two women over a Facebook post that complained about disruption in Mumbai following the death of Hindu nationalist politician Bal Thackeray.

The 21-year-old woman who wrote the post, as well as a friend who "liked" it, were detained in Palghar yesterday for "hurting religious sentiments," the Mumbai Mirror reported.

Both have since been released on bail. According to NDTV, they face 14 days in jail.

"People like Thackeray are born and die daily and one should not observe a 'bandh' [shutdown] for that."

That was enough to prompt a member of Thackeray's Shiv Sena party to complain to police, the Hindustan Times reported. A group of party supporters also reportedly vandalized an orthopedic clinic belonging the commenter's uncle.

The Press Council of India, a media watchdog, has called the arrests "absurd" and unconstitutional. In an open letter to the chief minister of Maharashtra state, council chairman Justice Markandey Katju demanded that the police officers responsible be suspended and threatened "legal consequences" if they were not.

"We are living in a democracy, not a fascist dictatorship," Katju wrote.

Mumbai was at a standstill yesterday as hundreds of thousands of Thackeray's supporters gathered for his funeral procession. As GlobalPost reported, the city had been on lockdown even before the divisive politician died on Saturday, in anticipation that his demise would spark violence.

India correspondent Jason Overdorf described Thackeray as "a political boss with the power to turn Mumbai upside down." He promoted a strongly nationalist ideology and was accused of inciting conflict between his Hindu supporters and Muslims.

So far no serious incidents have been reported following Thackeray's death.

As Overdorf has reported, it's not the first time Indian authorities have been accused of censorship: during ethnic violence in the northeast of the country earlier this year, the government blocked websites, Twitter accounts and news portals.

It defended the moves on the grounds that the content could spark riots, but critics say that the measures went beyond that and became an assault on free speech.