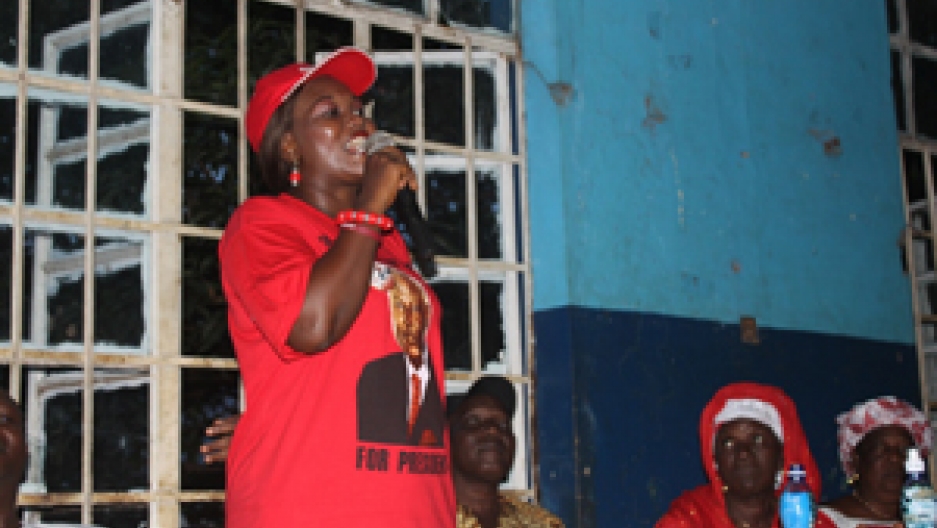 Rosaline Smith is one of just 38 women who are able to run for election in Sierra Leone. (Photo by Bonnie Allen.)

There’s no electricity and the room is dark. Then the battery-operated microphone cuts out.

But the 39-year-old mother of two perseveres. As a woman running for parliament in Sierra Leone, she has bigger challenges.

“Contesting election in Africa, especially in Sierra Leone where women are marginalized — women have been in the back, in the kitchen for so long — contesting with men, strong men, it’s not an easy battle,” she said.

Sierra Leoneans vote this weekend in the country’s third election since the end of its brutal civil war in 2002. The West African country has made a lot of progress. There are better roads, more reliable electricity, improved health care and increased foreign investment. But the status of women continues to lag, and cultural and economic barriers continue to keep them out of the political arena.

Women make up 52 percent of Sierra Leone’s population, yet account for only 13 percent of members of parliament and 19 percent of local councilors.

She spent eight years living overseas. She has a college degree. Her husband is a successful businessman who’s willing to fund her campaign. All that gives her the confidence to ignore intimidation.

“They said, ‘do you think this whore is going to lead us? We’re not going to let that happen,’ but I don’t let things like that bother me,” Smith said. “(It’s) just intimidation to make you feel bad.”

Smith is one of just 38 women who are running for parliament in Sierra Leone’s election on Saturday — compare that to 548 men. More women were interested in running, but the political parties rejected them.

“We still have a serious challenge of chauvinism in this country,” said Marie Jalloh, a member of parliament for the ruling party. “We still have to work harder as women. The male dominance is so much everywhere in our political parties. I felt so disappointed.”

Jalloh relaxes on a plush red couch inside the country’s parliament building. She was elected in 2007, but was rejected by her party this time around.

Still, Jalloh is frank about women’s lack of readiness to run in post-war Sierra Leone. Most are illiterate, too poor to pay for an expensive political campaign, and scared of entering the patriarchal political arena.

“The general perception is that politics is a man’s game. It’s dirty,” explained Monica Timbo of Campaign for Good Governance, a local organization that has lobbied for more female participation.

During the campaign, Timbo has collected stories from women candidates who were called prostitutes, publicly ridiculed for having children out of wedlock, and received physical threats. “Most women don’t want to subject themselves to that. And they think, if you go into politics, you have to do corrupt, negative things. It’s a man’s world,” Timbo says.

Women’s groups in Sierra Leone have campaigned for years to get a 30 percent quota for women in elected and appointed positions — the only way, they say to get women into government. A bill to do that was dismissed in parliament before the election.

At a rally in the eastern province, the main opposition leader, Julius Maada Bio, blows kisses out of the window of his shiny black SUV. Bio selected a female running mate, Kadi Sesay, the country’s first female vice presidential candidate to run for a leading party, but his party is only running 10 women for parliamentary seats. He says putting more women on the ballot would be political suicide.

“It is extremely difficult,” Bio said. “I will only be able to secure the interests of women if I’m in power.”

He said that if he were to put up more women as a symbol, they would just lose, and so would he.

Many African countries surpass the global average of 20 percent female representation in their national parliaments. Rwanda has the highest number of women in parliament in the world with 56 percent.

In Freetown, Rosaline Smith stands a good chance of winning — mostly due to the ruling party’s popularity in her area. If elected, she knows she’ll be one of only a few women in government.

And she'll likely face more discrimination inside the House of Parliament.