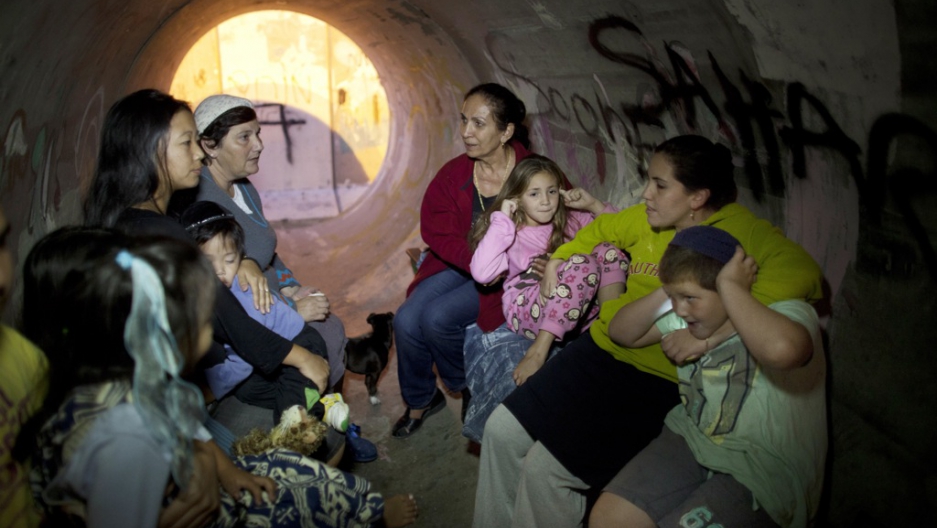 Israelis take cover in a large concrete pipe used as a bomb shelter after a rocket was launched from the Gaza Strip on November 15, 2012 in Nitzan, Israel.
Credit: Uriel Sinai
Share

ASHKELON, Israel — At a hotel here Friday morning, two cheery Swiss tourists had the drill down, shuffling between their room and a bomb shelter five times without complaint .

Israeli air force jets roared overhead and the muffled explosions of anti-rocket batteries could be heard at regular intervals. “I don't mind at all,” Attila Diamand said. “I was here visiting a kibbutz 30 years ago and we were attacked then, too. This is just the same. It’s fine.”

One rocket that Israel’s Iron Dome missile defense system failed to intercept landed in a nearby parking lot.

But any feeling of déjà vu for observers of this conflict between Israel and Hamas, the rulers of Gaza, is fleeting. It’s almost as temporary as the cease-fire that was supposed to cover Egyptian Prime Minister Hisham Qandil’s 90-minute visit to Gaza — about the time it takes to reload a missile launcher.

This time, the undeclared war is highlighting the kind of repositioning of forces within the Arab world that hasn't been witnessed in a generation.

Qandil's gesture of solidarity with Gaza, the first visit of an Egyptian leader in living memory, was as loud an announcement about a new Arab bloc as any since the beginning of the Arab Spring 18 months ago.

The visit didn’t seem to matter much for Israel, which simply reiterated over the course of Qandil's tour that it would refrain from bombing during the course of his stay.

However, it was a cause of consternation for Palestinian President Mahmood Abbas, who has found himself sidelined at a crucial moment for the Palestinian people. Ongoing questions about his legitimacy were underscored by his absence at the first quasi-state visit of an Egyptian leader to what is supposed to be his territory.

Abbas and his Fatah party in the West Bank have been in open political conflict with Hamas, which controls Gaza, since Hamas won power in Gaza in the 2006 elections, which brought about a failed power-sharing agreement. Since then, there's been a chilly divorce between the two factions, one recognized by Israel and the West, the other considered a terrorist offshoot.

Abbas cut short a European tour to attend to the looming crisis in Gaza, returning to Ramallah from Bern, the Swiss capital, about the time Qandil was touring Gaza with the Hamas leader, Ismail Haniyeh.

In Israel on Friday, long-range missiles launched in Gaza landed in the vicinity of the nation's commercial and cultural capital Tel Aviv for the second day in a row, disrupting weekend routines and raising more than a few eyebrows. Several rockets also reached the outskrirts of Jerusalem.

About 16,000 reserve soldiers were called up in anticipation of a possible ground incursion. Buses full of soldiers, trucks, tanks and even military ambulances could be seen heading south on Israel's highways.

Also on Friday, family and friends buried Itzik Amsalem, 24, of Kiryat Malakhi. He was one of three Israelis killed on Thursday morning when a rocket hit a block of apartments in the working-class town. The projectile hit as Amsalem argued with his mother, who had implored him to take shelter in the building's stairwell. He had wanted to photograph the Iron Dome in action.

Aharon Smadja, a neighbor who attempted to mediate, was also killed. A young mother, Etti Scharf, was killed in the next apartment.

Two hours later, the building remained in disarray and disrepair, with frightened neighbors mulling about in confusion. In Scharf's apartment, bloodstained bedsheets were found in the children’s room. An upturned table had shattered breakfast dishes.

“I am here on behalf of my government to express solidarity with Israel's right to defend itself,” he said, standing in the burning autumnal sun outside the building.

Tomer Nadau, 18, who had been asleep two buildings down the street at his aunt's home when the missile struck, leaned against a parked car, watching the journalists and the dignitaries jostle in the aftermath.

"It was scary as hell. It woke me up," he said. His boss called to find out if he could come in for an earlier shift and Nadau replied, "It just exploded right near my house!"

A recent high-school graduate originally from Haifa who sports a large diamond in his left ear, Nadau is waiting for the draft in a few months. "I want to be a combat soldier, but my mom doesn't want to let me," he said.

Israel’s Minister for Public Diplomacy, Yuli Edelstein, also visited Kiryat Malakhi on Thursday. He is in charge of safeguarding Israel's message — or brand — abroad. Speaking fluently in three languages, he expressed gratitude to foreign leaders who had "sided with Israel's right to defend itself in the face of missiles threatening 1 million of our citizens daily."

Edelstein singled out US President Barack Obama's expressions of support. He derided "all those who foresaw that a re-elected President Obama would pressure or punish Israel, or that our bilateral ties would in any way be affected. See? It was all ridiculous."

But the situation remains fraught for everyone involved. Meeting journalists, residents of southern Israeli cities talked themselves hoarse repeating lines such as, "You've just come down now, but for us it's like this all the time.”

Those were the words of Paz Azran, a 17-year-old girl from Ashkelon. "We have these sirens and we have to get up and run to the shelters all the time, so we don't mind doing it now too, now that the government is finally acting," she added.

Meanwhile, Jerusalem was on high alert after numerous calls across the Arab world for protests against Israel. Police were spread out across town and in an indication of the city's frayed nerves, light rail service was interrupted after a suspicious object was found at a stop outside the national military cemetery.

Egypt geared up for one of the first major tests to face its new president, Mohammed Morsi of the Muslim Brotherhood party: a million-man march in Cairo, calling on him to sever ties with Israel.

In what will surely be seen as a further strengthening of Hamas' hand, Tunisian Foreign Minister Rafik Abdesalam announced he would also visit Gaza on Saturday.

For the Palestinians, who have long yearned to be a priority in the Arab world, the reconfigured and Islamist-leaning puzzle that seems to be emerging from the upheaval of the Arab Spring presents a unique opportunity.

But Hamas, which for now seems to be reaping most of the benefits, represents only a very small portion of them.