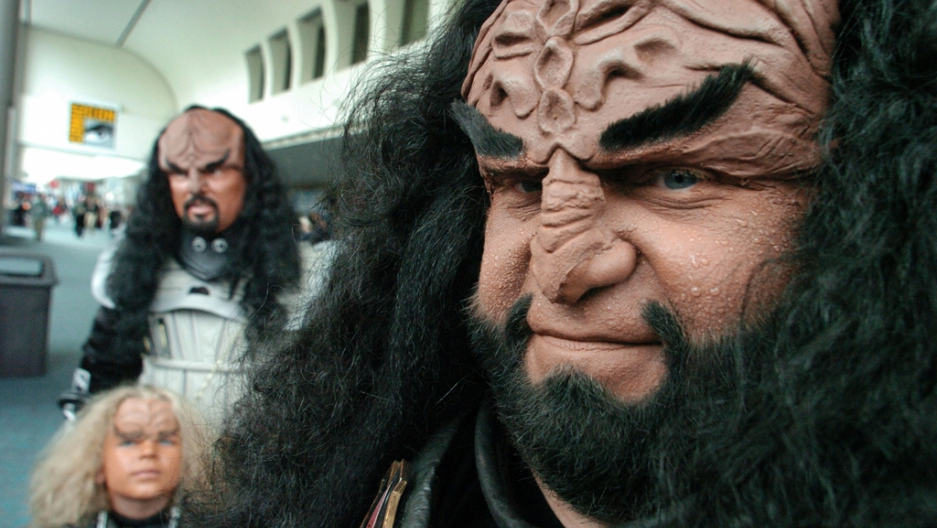 DARPA's massive budget has led to state-funded events of dubious relevance to national security or defense reserach. Klingon enthusiasts like Kevin Taylor, pictured, were happy to attend a DARPA-funded workshop on the implications of alien life for Christianity called "Did Jesus Die for Klingons, Too?"
Credit: Sandy Huffaker
Share

As part of that initiative, DARPA — the legendary advanced research arm of the Pentagon that's known for sponsoring way-out-there research — last year paid nearly $100,000 for a workshop that included a discussion session entitled "Did Jesus Die for Klingons, Too?" The seminar focused on the implications for Christianity if intelligent life were to be found on other planets, the report said.

Klingons are a fictional, warlike alien race from the long-running "Star Trek" franchise. But the theological question could be just as easily posed of Romulans, Vulcans or even Ewoks, although Ewoks are from "Star Wars," and are more cuddly than Klingons.

Coburn's point is that in a time of staggering budget deficits and potentially rising taxes, the Pentagon — even in its pointy-headed research department — ought to be more judicious with taxpayer dollars. (Obama: Ending tax cuts for rich resolves half of 'cliff'.)

Coburn's report notes that headliners at the event included former "Star Trek" actors LeVar Burton and Nichelle Nichols, and it included an event called an "intergalactic gala celebration" to which attendees were encouraged to wear "starship cocktail attire."

The Klingon discussion is just one example of Pentagon waste drawing Coburn's ire.

Coburn wrote that the Department of Defense has become the "Department of Everything," engaging in a wide range of unnecessary activities, from conducting non-military research to running a redundant elementary school system to operating grocery stores. Just the overhead costs alone at the Pentagon, Coburn pointed out, are greater than the GDP of entire nations like Israel and the United Arab Emirates.

All told, he said the Department of Defense budget could be slashed by $69.7 billion over 10 years without impacting America's fighting strength. (Congress sees rising urgency on fiscal deal.)

"The DoD budget is aligned to strategic priorities we have identified to keep America safe and maintain the strongest military in the world," Pentagon spokesperson Lt. Col. Elizabeth Robbins said in an emailed statement. "Over the past several years we have redoubled our efforts to make better use of the taxpayer's defense dollar and meet our fiscal responsibilities."

Other programs Coburn singled out include a $1.5 million effort to develop a new type of beef jerky that is flat like a Fruit Roll-Up, rather than round, like a Slim Jim. The report noted that "a variety of flavors are being developed, including salami, chipotle, turkey, pork, and smoked ham. There is also a product made from fish," but the a food scientist involved in the process said "the recipe needs to be tweaked to make it less fishy."

And Coburn also drilled down on Pentagon-funded research into the swimming patterns of groups of goldfish. The report noted that researchers claimed "experiments on fish paired with mathematical models and computer simulations 'can ultimately provide insights into humans’ political behavior.'"

And what about the eternal souls of those Klingons? According to media accounts, the philosophy professor invited to give the lecture argues that Jesus did not die to save them. If Klingons sin, they're on their own.

CNBC: Why Chrysler’s Makeover Is Far From Finished

CNBC: Here's Why the 'Fiscal Cliff' Hasn't Been Solved Yet: Bowles