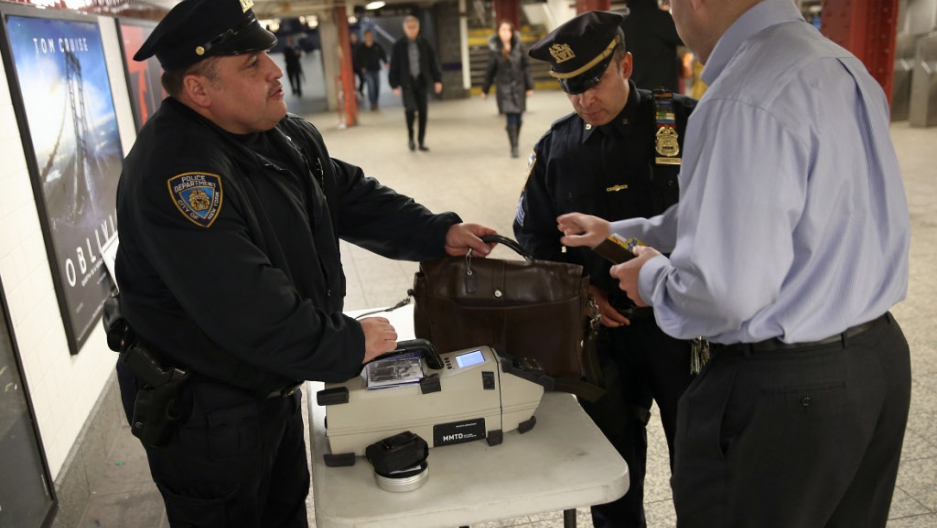 Police check a subway passenger's bag at Penn Station on April 16, 2013 in New York City. Adis Medunjanin, a Bosnian-born US citizen, was sentenced to life in prison for helping to plan a suicide bomb attack on the New York subway system in 2009.
Credit: John Moore
Share

Adis Medunjanin, a Bosnian-born US citizen, today was sentenced to life in prison plus an additional 95 years for helping to plan a suicide bomb attack on the New York subway system in 2009, Bloomberg Businessweek reported.

Officials said the 28-year-old Medunjanin, who lived in Queens, NY, and his co-conspirators, Najibullah Zazi, 27, and Zarein Ahmedzay, 27, were just days away from executing their plan when it was foiled by the feds, CNN reported.

The three, friends from high school, traveled to Pakistan's tribal region in 2008, where they received terrorism training from Al Qaeda operatives, prosecutors said, according to CNN.

After federal agents searched Medunjanin's home in January 2010, Medunjanin got into his car and sped erratically across the Whitestone Expressway in Queens, crashing his car into another vehicle in what prosecutors described as a last-ditch attempt to fulfill his suicide mission.

Zazi and Ahmedzay pleaded guilty to the plot and testified against Medunjanin during his trial, Reuters reported. Zazi and Ahmedzay are scheduled to be sentenced on Dec. 14 and May 10, respectively.

In court today, Medunjanin maintained he was innocent, Bloomberg Businessweek reported. He recited some verses of the Koran in Arabic and talked about social injustice.

“I would like to ask you in what kind of world are we living, full of hate and lies?” he said, according to Bloomberg Businessweek. “Why is it we always talk about helping the poor, but all we see is poor getting poorer?”