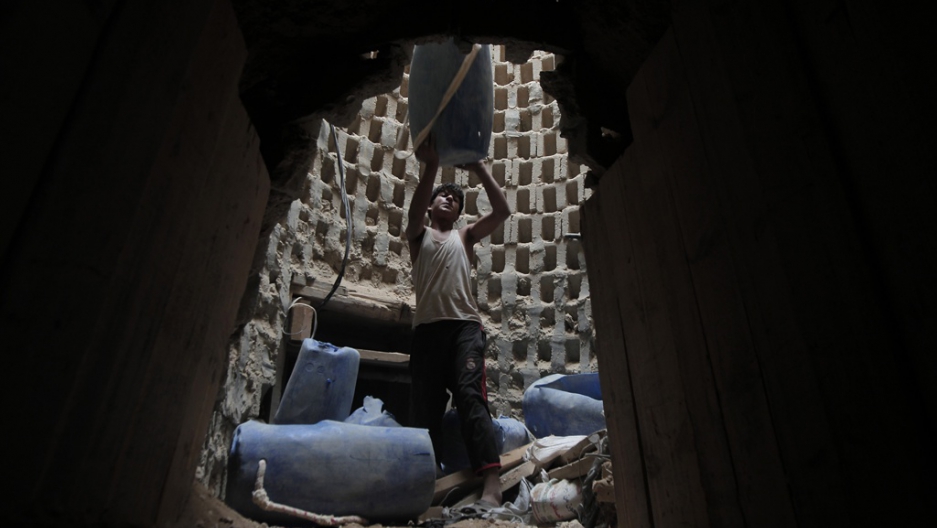 A Palestinian smuggler in a tunnel along the Gaza-Egypt border.
Credit: Said Khatib
Share

GAZA CITY and RAFAH, Gaza Strip — Amid the jostle for space in the dusty lot that hosts Gaza’s busy used car market, 60-year-old Abu Eyad sits behind an aging wood desk. He counts wads of cash from the day’s sales, eyeing the Hamas police patrol outside.

“They control the market and they control everything,” said Abu Eyad, who manages the car lot. He says he gives at least 18 percent of every transaction fee to Gaza’s Hamas-run government.

Five years ago Hamas won the Palestinian legislative lections, then seized power in Gaza after a brief civil war with its rival, Fatah. Sworn enemies of Israel, Hamas and the tiny, beleaguered territory they inherited were quickly placed under onerous international trade sanctions.

But instead of crippling Hamas’ rule, the years-long blockade has turned the movement into a wealthy enterprise with a far-reaching tax regime and widespread investments.

Hamas’ wealth has helped it win some local support, but the group’s mafia-style intrusion into sub-sectors of Gaza’s economy has frustrated others. Hamas leaders have positioned themselves as overlords of the territory’s business transactions.

In an effort to pressure Hamas, Israel often closes border crossings, choking off traditional commercial routes. This has allowed Hamas to consolidate control over smuggling tunnels under the Egyptian border.

“The traditional businessmen of Gaza, the traditional landowners, and the traditional [influential] families have all disappeared” in the past few years, said Eyad Sarraj, a Gazan psychiatrist and rights activist who also served as a consultant to the Palestinian delegation at the 2000 Camp David Accords.

“They are being replaced by new businessmen, new leaders and new families — families from the villages from where Hamas leaders come,” he said. “The big umbrella of power [in Gaza] today is Hamas. If you are under that umbrella, you can have some power.”

The full extent of Hamas’ financial empire remains unclear, as it hides much of its funding — including cash from patron states abroad — from scrutiny. But the movement is considerably better off than it was five years ago.

Hamas’ Minister of Economy Aladeen Rafati said the government’s total public budget for 2012 is $796 million, 25 percent more than in 2011.

The Hamas government levies a value-added tax of 14.5 percent on all services and goods sold in Gaza, in addition to a progressive, annual income tax. They also charge fees for financial transactions, like the sale of cars at Abu Eyad’s lot, and numerous government-issued licenses, including car and boat registration, birth certificates and driving and building permits.

Such fees are a significant departure from Hamas' policies when it first took power. Hamas had first said that because of the blockade, and because people were suffering, it would exempt anyone from paying onerous fees. By 2009, Hamas started collecting, and now the fees are widespread.

The Israeli bombing campaign that began on Wednesday, however, could once again decimate Gaza’s economy.

During Israel’s war in Gaza in 2008 and 2009, factories and infrastructure were pummeled. Economic life came to a standstill as civilians stayed home to avoid air strikes.

Because Gaza’s economy relies so heavily on the smuggling tunnels under its border with Egypt — which also ferry weapons — any Israeli strikes on the underground passageways will also likely halt commercial trade.

For now, the illicit tunnel trade is booming. In August, Egypt closed some of the tunnels after militants killed 16 Egyptian soldiers in the Gaza border region, cutting some imports. But the passages, which Hamas controls using hundreds of well-armed security forces, are still very much open for business, according to smugglers.

The tunnels started as rudimentary crawlspaces for economic — rather than military — use five years ago. They have since morphed into cavernous, state-of-the-art passageways that can transport full-sized cars, camels and even heavy machinery.

The tunnels helped foster a 20 percent economic growth rate in 2011, according to the International Monetary Fund.

A recent report from the UN’s International Labor Organization says the tunnel economy serves “the de-facto authorities in Gaza, who receive a considerable share of the benefits.”

According to figures collected by GlobalPost in July — from the United Nations, the Ministry of Economy, business associations, smugglers on both sides of the Gaza-Egypt border, and local merchants — revenues from customs duties on the most lucrative products, including smuggled cigarettes, fuel and construction goods, bring in as much as $179 million each year. That’s 60 percent of Hamas’ budget operating costs.

“We pay income tax, we pay value-added tax. We pay property tax and we pay customs on our goods,” said 45-year-old appliances shop owner, “Ustaz” Farid, using the Arabic title for “professor.” “I don’t know how much, but it’s a lot. We are taxed everywhere.”

For its part, Hamas says it spends the bulk of its finances paying the salaries of the some 40,000 civil servants and security forces it employs.

But its officials and supporters — including financier Abdul Aziz Al Khaldi, who owns the beachfront Commodore Hotel, and the Hamas interior minister, Fathi Hammad — appear to be culling considerable revenue from investments that businessmen connected to the movement are making across Gaza.

Local tradesmen and economists say Hamas associates are snatching up lucrative beachfront property, and bankrolling everything from fresh fish farms to shopping malls and taxi services. Solid figures on the amount of cash made from these investments and where the money is reinvested are still murky.

He refused. But now, Hamas’ signature green flags fly at the construction sites of what are sure to be the lushest resorts on Gaza’s coastline.

“These businessmen — they either belong to, are close to, or support the government,” Al Helow said. “Hamas and their wealthy supporters have high liquidity, and they are investing in many projects in the private sector. Gaza is a flourishing business for them.”

Some businessmen say the same merchants and smugglers loyal to Hamas are notorious for buying cheap goods in bulk from Egypt, gouging market prices that hurt shop-owners importing more expensive products from Israel.

Hamas loyalists have also supplanted international agencies like the United Nations as the territory’s leader in reconstruction, following the 2008-2009 war with Israel that left thousands of commercial and residential structures in ruins.

The United Nations and other agencies face long delays when importing raw materials from Israel. But Hamas uses the tunnels and its vast Egyptian smuggler networks to workaround restrictions and cart cement and other goods into the construction-hungry strip.

New projects that were not approved by Israel prior to the easing of the blockade in 2010 can take 63 weeks to get the proper materials, a high-ranking UN official in Gaza, speaking on condition of anonymity, said.

“It’s absurd that we can’t get the same exact materials in the exact same quantities that are already on the open market,” the UN official said.

The United Nations says nine times as many construction goods were entering Gaza through the tunnels as through the Israeli crossings this year.

“Every piece of raw material comes through the tunnels, and Hamas controls all of the tunnels,” said Mohsen Khozendar, a distinguished businessman who maintains investments in Gaza’s construction and petroleum sectors.

“Today, Gaza is all Hamas,” he said. “Those who dance with Hamas, they benefit. And if you don’t, you are out of business. There are no competitors.”