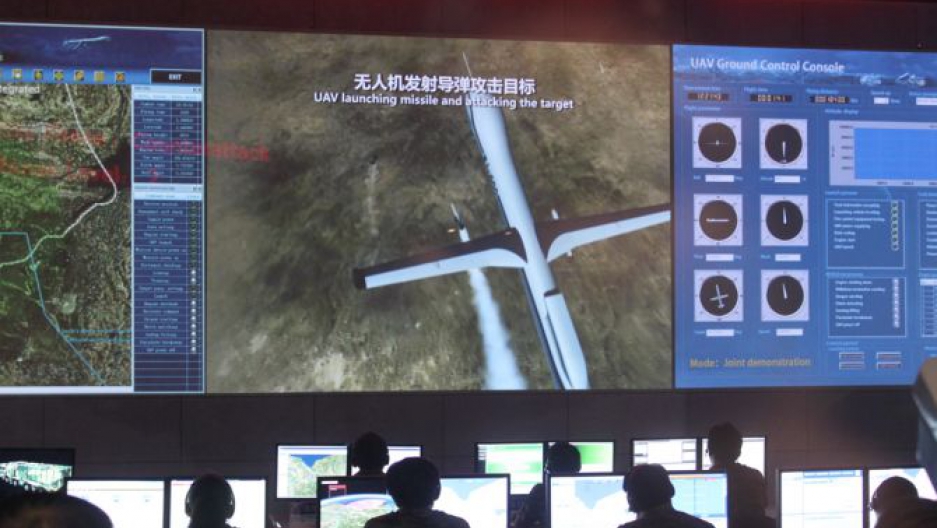 ZHUHAI, China — Although China’s drone technology may be several years behind top manufacturers in the United States and Israel, the country’s unmanned aerial vehicle manufacturers are hoping their mid-range prices and middling technology will lure potential customers from developing countries looking for deals.

Delegations of military and civil-aviation officials from Kenya, Russia and other countries made the long journey to get a closer look at some of China's top exportable UAVs the government allowed to be publicly displayed for the first time at the biennial Zhuhai Air Show, which began here in south China on Tuesday.

Representatives from China Aerospace Long-March International, a division of the state-owned China Aerospace Science and Technology Corporation (CASC), were on hand at a display of a medium-range UAV called the CH-4. They spoke with relative candor about that and two other drones the company was showing for the first time.

"We've been contacting many countries, especially from Africa and Asia," Guo Qian, a director at a division of CASC, said when talking about the interest and marketability of the company's military grade drones. "They are quite interested in the intermediate and short-range UAVs because they are portable and low-cost."

In one half-hour period on the opening day of the show, a delegation of a dozen military officers from Myanmar stopped by the CASC display for a few minutes to hear a quick sales pitch, followed by a handful of more dapper officials from Kenya who chatted a little longer with the reps about a forthcoming trip to Beijing.

Asian and European delegates also could be seen ambling up to the railing to get a closer look.

Guo said that Pakistan had already purchased several CH-3 drones, but those have been now upgraded to CH-4 capability due to a service agreement they'd hatched together.

The latest CH-4 on display can be used for reconnaissance and combat, carries up to four precision-guided bombs, can reach an altitude of eight kilometers, has a range of 3,500 kilometers, and fly for up to 30 hours depending on how heavy a payload it is carrying.

The company, which is based in Beijing but manufactures in the nearby municipality of Tianjin, is currently negotiating with Egypt on selling a "whole package air defense system," Guo said, which will also include medium-range CH-91 military surveillance UAVs that cost around $3 to $5 million including the vehicle and operating system.

CASC also displayed a handful of smaller short range drones and set up a flashy ground-to-ceiling UAV attack simulation compete with a dozen technicians glued to computer screens in a the make-believe war room.

"Our company has set up a pretty aggressive sales target for UAVs, but the global market competition is quite fierce," Guo said. "There are many similar products in the global market and they are quite mature, so we haven't had a big impact in the market. It will take some time for our products to be known and accepted."

Compared to the glitz of the displays and openness from the CASC reps, who talked frankly to delegations, journalists and your average Zhou, there was a stark difference in how the Aviation Industry Corporation of China (AVIC) — the company's main competitor — played its hand.

Its showcase offered only small-scale models of UAVs and while all but one had printed material to give viewers a better idea of the capabilities of the drones, guides said there was none for their major product — the Wing Loong drone — almost an identical twin to the CH-4.

Out under the hot sun on a far corner of the tarmac, an actual Wing Loong was on display, along with several other drones including a mini-jet UAV called the Blue Fox used for air-to-air combat training, but company representatives were assuredly tight-lipped about their top drone.

Although security allowed Chinese reporters inside the fenced-off area to get close to the vehicle and take group photos next to it, they refused to allow any foreign reporters or foreigners not in an official delegation inside.

Reports in the Chinese press indicate the Wing Loong can fly for around 20 hours maximum, has a range of around 4,000 kilometers, and costs around $1 million for the vehicle itself.

AVIC representatives also displayed a few drones that have been converted from military to civilian use that they hope to sell, but admitted that they have not sold any yet outside of China.

One of them, the SW-1, costs around $640,000, which doesn't include the price of the large truck that holds the computer system needed to operate the drone. A rep also said that it takes two or three months to train someone to use the UAV, which is a considerable investment considering the ease of training on new drones coming down the pipeline.

For smaller players not directly attached to big state-owned aviation corporations such as AVIC and CASC, the export situation is a bit more difficult — even if they have better prices, technology and mobility advantages.

AVIC and CASC are the only real games in town in the military UAV market, and also have huge advantages in harnessing domestic and foreign markets for civilian use drones.

They are usually the first to get connected to a ministry or institute who might need a UAV on the domestic front, such as the Ministry of Environmental Protection, which recently bought an SW-1 for environmental surveying, an AVIC representative said.

For sales abroad, they are often helped by other government offices who act as their promoters and advertisers. They can also cut through export approval red tape much more easily than a small private company like Beijing Creaton Technology Co., which focuses on civilian drones.

"We have some problems, according to Chinese law we cannot export our product and have to apply for some licenses," said Yin Hongjun, Beijing Creaton’s general manager. "If we followed that we wouldn't be allowed to export at all."

One of Yin's T10S Mini Hornet UAVs, which sit at the 2-kilogram limit where an owner would not need a license under Federal Aviation Administration guidelines to operate it in the US, runs from $12,800 to $25,600, depending on if you want to install your own operating system or have it installed.

Compared to the six-figure SW-1, which has a maximum takeoff weight of 85 kilograms and can fly for only around 3 hours, the T10S is smaller, lighter, easier to learn and doesn't include the multi-ton military truck.

"In the last two years these UAVs have become more affordable, more convenient," Yin said. "It's easier for the common guy to use. It's very easy to launch. It only takes about four hours to learn how to use [ours]."

Yin said that when his company can get around the export controls, his main export customers have come developing countries, though he has had a seal researcher at the University of Alaska purchase one of his UAVs because it worked just as well but was half the price of the previous American drone he’d used.

"They had to import the frame of the plane as a model airplane," Yin said.

For the foreseeable future, China’s drone economy will operate on two tiers.

"For the military, they are up here," Yin says, holding his hand up above his head. "But we are down here," moving his hand down to his waist.