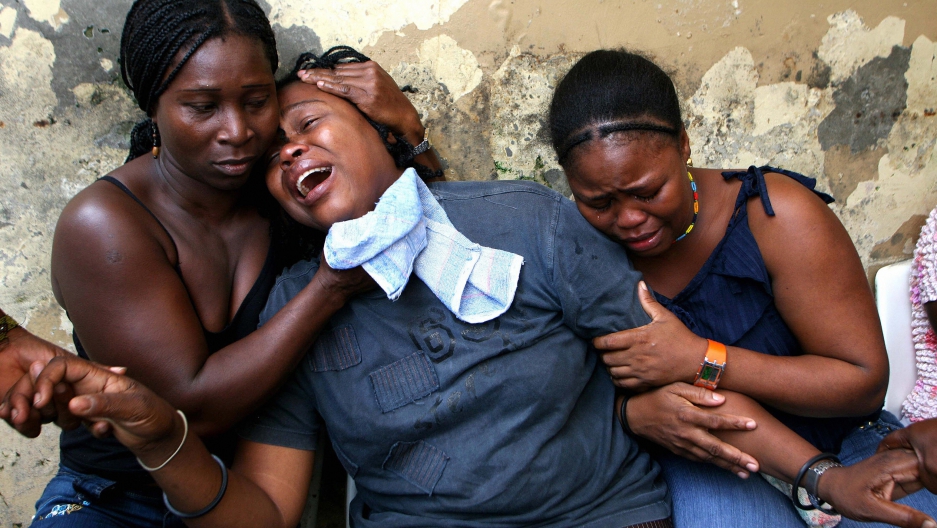 Colombian relatives grieve the death of six miners killed by an unidentified group in 2007 in Quibdo, in the impoverished, mostly Afro-Colombian department of Choco. A survivor said the miners were hacked with machetes and shot at.
Credit: Juan Manuel
Share

The guerrilla war that began in 1964 affects them nearly every day.

Even with peace talks imminent, the area is a war zone. Over the weekend, for example, the Revolutionary Armed Forces of Colombia, or FARC, issued a transportation ban until Friday. That means anyone caught traveling on the roads or rivers in Choco are considered military targets. On Sunday, the FARC burned a bus and another vehicle whose drivers refused to comply with the order.

Transportation is completely paralyzed, according to Choco governor Oscar Gamboa. The only way in and out of Choco, an expanse of jungles, rivers, and ramshackle towns bordering Panama and the Pacific coast, is by airplane.

“People here have really suffered from the war so everyone in Choco is hoping that the peace process works out,” said Leyner Palacios, a lawyer in Quibdo, the capital of Choco.

Palacios speaks from bitter experience: He is a survivor of one of the worst human rights tragedies of the war that occurred in Choco a decade ago.

On May 2, 2002, as the FARC battled right-wing paramilitaries, the leftist guerrillas fired a homemade rocket that hit a church in the town of Bellavista. Hundreds of civilians had taken refuge from the fighting inside the church and 119 of them, including many women and children, were killed in the explosion.

Reparations for war victims, such as those in Bellavista, will be part of the agenda as government and FARC negotiators begin talks in Havana, following an inaugural ceremony last month in Oslo, Norway.

The fighting won’t end immediately. Although the FARC is pushing for a cease-fire, the government has refused because it fears the rebels might use any lull in the fighting to rearm and regroup. The talks are expected to last at least a year and will focus on ways to demobilize the FARC and allow its members to participate in legal politics.

These are the first peace talks between the two sides since a lengthy round of negotiations held in southern Colombia ended in failure a decade ago. At that time, the FARC was at its military peak with some 15,000 fighters. Many of its commanders believed the rebel army was winning the war and showed little interest in compromise.

Now, however, the government appears to have the upper hand. A US-backed military offensive has cut the size of the FARC in half to about 8,000 fighters and has taken out many of the rebel force’s top commanders. Last year, an air strike killed Alfonso Cano, the FARC’s paramount leader.

Yet the government also has some strong incentives to make some concessions at the peace table that would convince the guerrillas to disarm. As the transportation strike in Choco demonstrates, the FARC remains a menacing presence in many parts of rural Colombia.

Choco’s thick rain forest and maze of rivers have long provided rebel fighters with an ideal sanctuary from the army. More recently, the conflict has intensified as anti-drug raids in southern Colombia have pushed the cocaine trade into Choco.

The department is now dotted with fields of coca, the raw material for cocaine that provides the FARC with millions of dollars in profits. In addition, the FARC squeezes gold miners and loggers in Choco for extortion payments, all of which help keep the rebel war machine running.

“Mining and forestry are controlled by the FARC and other criminal gangs,” said Richard Moreno, a legal adviser to an NGO that promotes social development in Choco. “If you don’t hand over extortion payments, you can’t work in Choco.”

The violence has helped keep Choco, which is populated by mostly Afro-Colombians who are the descendants of slaves, mired in poverty. Indeed, the war is estimated to shave several percentage points from Colombia’s annual gross domestic product while it forces the government to funnel huge sums into defense spending. In a peaceful Colombia, analysts say, those funds could be dedicated to education and health projects in forgotten backwaters like Choco.

Except for gold mining the economy in Choco is stagnant with few national or foreign investors interested in sinking money into the war-ravaged region. Due to the poor state of the roads, which are often washed out by torrential rains, it takes about 12 hours to drive from Quibdo to Medellin in the adjacent department of Antioquia. About 60 percent of the population lives in poverty compared to a national average of 37 percent.

That poverty was a key driving force behind the rebels’ original mission. The FARC says it’s fighting to take power in order to create a fairer society, redistribute land and nationalize key industries. The United States and the European Union label the group a "terrorist organization."

Yet even if the FARC agrees to disarm, some observers here remain skeptical that Choco will bounce back. For one thing, they question whether some FARC units involved in drug trafficking and other lucrative ventures will comply with orders from their high command to put down their weapons.

More from GlobalPost: The US should back Colombia peace talks

What’s more, the FARC is not the only criminal organization operating here. If the government troops fail to move into areas vacated by the FARC under a peace treaty, those territories could be taken over by other illegal armed groups, according to Leon Valencia, who heads the New Rainbow Foundation, a Bogota think tank.

Those groups include former paramilitary fighters who once battled the guerrillas, but have in recent years morphed into drug-trafficking gangs. A smaller guerrilla group, known as the National Liberation Army, or ELN, also operates in Choco and other rural areas.

“You can’t just have one side turning in its weapons,” said Sister Elsa Rueda who works for the peace and justice committee of the Roman Catholic Dioceses in Quibdo.

“Disarming the FARC would resolve just one of about 10 problems.”