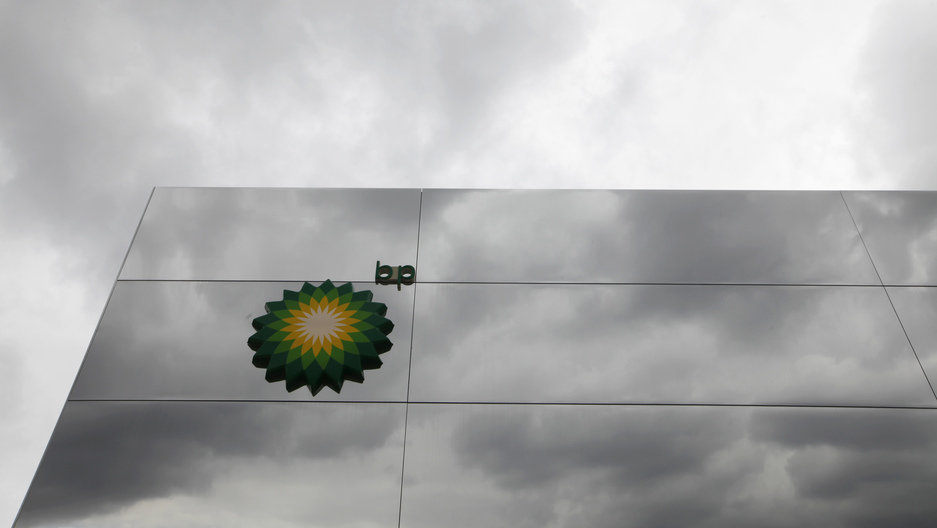 BP's logo is seen on one of its corporate sponsor pavilions in the Olympic park, in Stratfod, east London, July 19, 2012. A group of Soviet-born tycoons said on Wednesday it had notified BP of its intention to start talks with the British oil major on increasing its stake in Russia's third-largest crude producer, TNK-BP. BP put its stake in TNK-BP up for sale on June 1 after a breakdown in relations with the AAR consortium, with which it shares control over a firm that accounts for almost a third of BP's total crude output. REUTERS/Andrew Winning (BRITAIN - Tags: ENERGY SPORT OLYMPICS BUSINESS LOGO)

Share
Four and a half billion dollars. That's what the British oil giant BP has agreed to pay Thursday to settle federal criminal charges stemming from its massive 2010 oil disaster in the Gulf of Mexico. The World's Environment Editor Peter Thomson has been following this developing story as well as the rest of the week's environmental news and he speaks with host Aaron Schachter. Schachter: Peter, this is a fairly dramatic development in this long-running story about the Gulf oil disaster. What do we know? Thomson: Well, what we know is that BP will plead guilty to a host of federal criminal charges related to that explosion and blowout at the deepwater horizon drilling rig in April of 2010. You probably remember that 11 people were killed in that explosion… and that of course oil gushed into the Gulf of Mexico for almost three months… A lot of folks have called it the country's worst ever environmental disaster… and it brought an avalanche of lawsuits and criminal charges. So today BP has agreed, as you said, to pay four and a half billion dollars. It's being called a record settlement. It includes 1.3 billion in criminal fines with the rest going to government agencies like the securities and exchange commission. The charges that BP is pleading guilty to include 11 felony counts of misconduct or neglect and two misdemeanors related to environmental laws. Schachter: OK, now Peter, aside from the 11 deaths in this case, no one has really been able to quantify the environmental damage, but there've been a lot of comparisons to the Exxon Valdez oil spill in Alaska in 1989. How do the penalties BP will be paying stack up against what Exxon ultimately paid? Thomson: It looks like it's going to be a lot more in this case. Exxon paid a billion dollar criminal fine for that disaster. With inflation that works out to be about 1.8 billion today, so in that straight up comparison, it looks like BP will end up paying more than twice the fine that Exxon paid. Schachter: OK, so we have a settlement. Will that actually settle things? Thomson: Well no, actually, not at all. The settlement will still have to be approved by a federal judge. But even that wouldn't be the end of the story. For one thing, it looks like two BP employees will face manslaughter charges over the deaths in the disaster, and there are also tens of thousands of civil suits that the company admits will likely cost it many billions of dollars more. It also faces possible fines under the Clean Water Act that could run in the neighborhood of 20 billion dollars. Schachter: OK, we're talking about big money, big story, but not the only environmental news this week… Thomson: Well no, of course not. Since Sandy and the election a lot of folks have been watching to see whether president Obama would stake out a more aggressive position on climate change. Well he finally spoke about it at some length at his White House press conference yesterday…and unlike his forceful comments on other topics, he's still playing this very close to the vest. On the one hand he's clearly been paying pretty close attention to some of the science, and he made it clear that he was going to be personally involved in the search for ways to make political and technological progress. So that's a big change for him but he also made clear that wasn't going to do anything that would harm the economy or didn't have broad public support. Schachter: Is there any way to do that, really? Thomson: Well any policies that would make a really big difference on carbon emissions would have a huge impact on the economy and generate huge blowback, so it's really hard to see how he could satisfy those criteria while also breaking this political stalemate we're in Schachter: OK, Peter, at least the president is talking about climate change, which hasn't happened for quite a while. Do you think the president gets what many scientists are saying is the gravity of the climate challenge, or is it just another issue for him? Thomson: Well, politically, I t is an incredibly difficult issue, and a president has to balance a huge number of priorities of course—even a president who doesn't have to run for re-election. But frankly, I still don't think he quite gets what scientists are saying is the urgency of the problem. And it's interesting, because there was a strong message about that urgency this week in something else that made a lot of news for other reasons, and that was the International Energy Agency's new world energy report. The headline for most folks in that report was that based on current trends US is likely to overtake Saudi Arabia as the world's biggest oil producer within just a few years. And that would be a huge development. But for me the much bigger news for me in the same report was that based on those same trends, the world is going to blow past the international target for carbon dioxide, for limiting warming to 2 degrees Celsius. So the world's leading international energy agency says we're on a totally unsustainable energy path, and I think that even after Sandy and his re-election, the president and the country as a whole still really haven't really gotten that message. Schachter: The World's environment editor Peter Thomson. We have video of President Obama's comments on climate change at yesterday's press conference at theworld.org. Peter, thanks. Thomson: Thanks, Aaron.