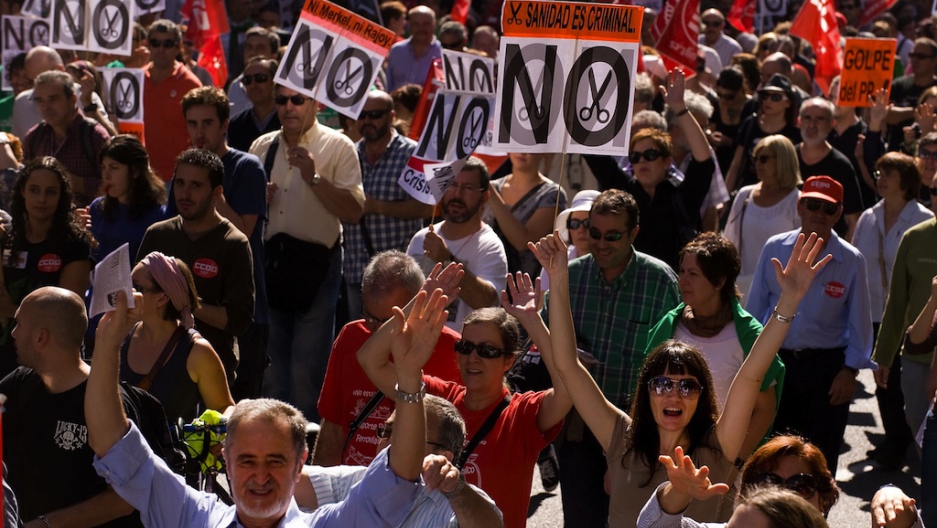 Major labor unions across Europe are protesting against austerity cuts with new strikes today, part of an event called the "European Day of Action and Solidarity."

The event is the biggest coordinated protest yet against the EU budget cuts, Bloomberg News reported.

Unions in Spain say that 78 percent of workers have observed the walkout, bringing industry to a halt. The protests turned violent in Madrid when demonstrators clashed with riot police, the Daily Telegraph reported. The police fired rubber bullets into the crowd and could be seen baton-charging the demonstrators.

Police arrested 82 protesters across Spain and 34 people were wounded, including 18 police, the AFP reported. A general strike in Portugal also paralyzed major industries. And in Italy, the EU's third-biggest economy, workers staged major walkouts, while some activists were accused of beating up police. "Europe is waking up today -- from Rome to Madrid to Athens," a Rome resident told the AFP.

The strikes come as governments in Europe are continuing to increase taxes and make deep cuts into health care, education and other public services. But the efforts have not appeared to help struggling workers. In Spain and Greece, more than 25 percent of the workforce remains jobless, the Wall Street Journal reported.

[View the story "Europe's General Strike, in pictures" on Storify]