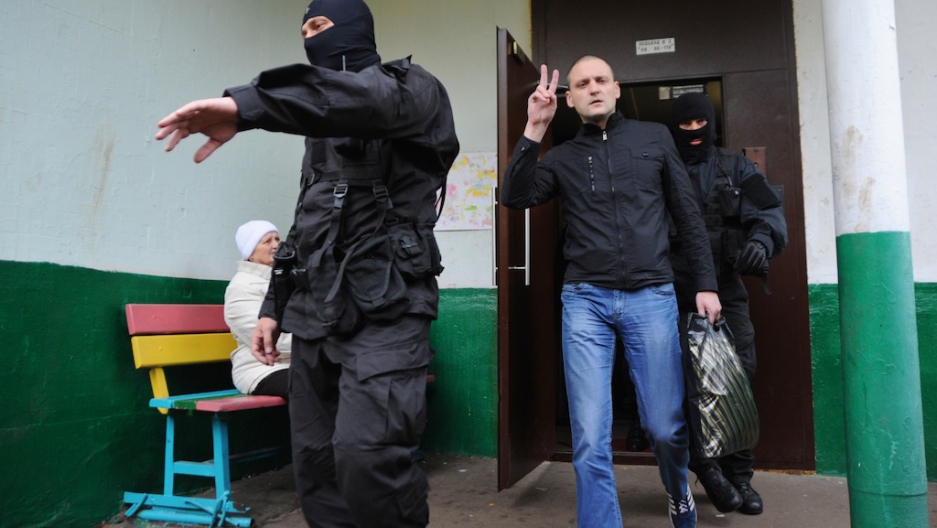 Ultra-left opposition leader Sergei Udaltsov flashes the V-sign for victory as he follows masked Interior Ministry officers taking him in for questioning after the search of his home in Moscow, on Oct. 17, 2012. Russian investigators launched a criminal case against Udaltsov, accusing him of plotting mass riots after he was featured in a documentary claiming he was planning a coup.
Credit: Andrey Smirnov
Share

"Their goal was simple: We have few traitors, it's difficult to prove their guilt, so it's necessary to expand it," she said. "Now they don't have to prove it any more. An opinion of law enforcement agencies would suffice."

"It's an attempt to return not just to Soviet times but to the Stalin era, when any conversation with a foreigner was seen as a potential threat to the state," she said.

The AP points out the law's more draconian measures:

The law "imposes a huge increase in potential fines for participants in unauthorized demonstrations. Another requires non-governmental organizations to register as foreign agents if they both receive money from abroad and engage in political activity. And another gives sweeping power to authorities to ban websites under a procedure critics denounce as opaque."

On Monday, President Vladimir Putin said he was "ready to return" to the bill and look at it "carefully."

"There shouldn't be any broader definition of state treason, [and] it shouldn't address issues that have nothing to do with the instance of state treason," he said, according to the Moscow Times. It's not clear which measures Putin thinks should be looked at and possibly revised.