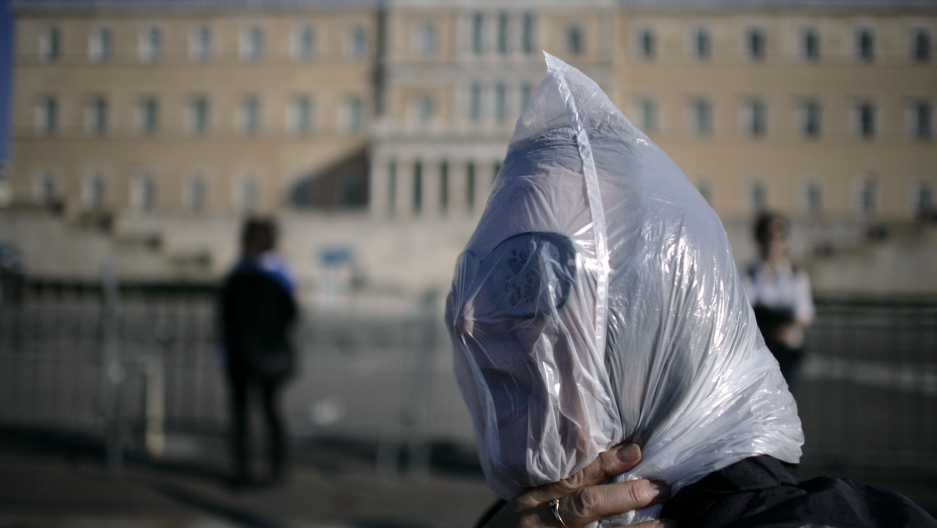 Greece is waiting anxiously for next tranche of its bailout money after IMF and Eurozone leaders disagree on debt sustainability.
Credit: Milos Bicanski
Share

GENEVA — It was only last spring that Citigroup had predicted the chances of Greece leaving the Euro were between 50 and 90 percent.

Now the so-called “Grexit” is hardly discussed after euro zone leaders and the European Central Bank have vowed to do what it takes to keep Greece in the monetary union.

Yet, Greece still walks a tightrope, forced to enact savage cuts simply to stay solvent for just a few months or weeks.

Greece has been all but locked out of the international long-term debt market for the foreseeable future, instead relying on bailouts from the EU and IMF to pay its creditors.

This reliance on bailouts has led to immense uncertainty in Greek economic life — a feeling of insecurity which has trickled down to Greek society.

In the latest close call, the Greek government held an emergency auction of short-term treasury bills Tuesday to stave off bankruptcy expected as early as Friday.

Without the sale, said the Associated Press, Greece would have been unable to repay five billion Euros in maturing bonds that come due this week.

This mini-crisis, hardly reported in the media — likely given its complexity and because it is an all-too-common occurrence in Greece these days — is a mere blip on the timeline of Greece's tragic narrative.

It also comes during a wider story about tensions brewing between Greece’s creditors and economic overlords: the IMF, euro zone finance ministers and the European Central Bank.

Euro zone finance ministers, headed by Luxembourg’s Prime Minister Jean Paul Juncker, have agreed to give Greece two years beyond its 2020 deadline to bring the debt to GDP ratio to 120 percent — still extraordinarily high in relative terms and double what the EU considers sustainable.

In an unusual move, IMF chief Christine Lagarde disagreed with the decision and said that Greece should stick to the 2020 target.

The IMF, which has dealt with structural adjustment scenarios many times before, wants more pressure on the Greek government.

“The IMF has been dealing with these kinds of situations for a number of years and believes its formula to be a proper one,” Alan Gayle, a senior investment strategist at RidgeWorth Investments in Atlanta, told GlobalPost.

Gayle also said that pressure is on the IMF to make sure their lending is being used as it intended.

“The IMF is putting out the money of its lenders and it has a responsibility to be a good steward of the money that has been contributed by them,” he added.

The debate strikes at the heart of behind-the-scenes tensions taking place among the so-called “troika” (the EU, the European Central Bank and the IMF), which are guiding Greece through its structural adjustment.

The IMF’s stance would see Greece’s creditors, including banks and European governments, get a “haircut,” meaning that they will be forced to take losses on Greek debt.

“If they take a haircut in the bonds it would mean Greece would pay back less than what they owe,” said Gayle.

“That’s tantamount to a giveaway. That’s not politically palatable in the northern European countries."

Juncker, the Luxembourg PM, is well aware that this proposition is unacceptable to European leaders, making longer and deeper austerity a necessity.

It also reminds observers that while the European debt crisis problem is economic, the long-term solution remains deeply political, particularly in Germany.

Though Juncker has subsequently downplayed the disagreement, the IMF will need to decide whether it stays in the troika or pulls out.

Any disengagement would spell doom for the bailout deal given that the IMF loans have been considerable in size.

But that’s unlikely, say some economists.

“It seems unlikely that the disagreement between the IMF and the EU ministers will make much difference,” Mark Weisbrot, co-director of the Center for Economic and Policy Research, told GlobalPost.

“Ultimately, the IMF is run by a board of governors and an executive board, and the EU finance ministers hold sway there on European matters, unless the US actively opposes them — which is not likely for any length of time.”

The spat has also meant that Greece has to wait on the next 31.5 billion euro tranche of bailout money, which was expected after the government passed its austerity budget last week.

The troika has made clear that the disagreement over the sustainability of the debt must be cleared up before the next tranche is delivered.

It is also unclear whether Greek society can withstand more austerity without a clear endgame.

Currently, about one quarter of the Greek population is unemployed and over half of young adults.

The Greek economy has seen a depression-level contraction and is expected to shrink another 6.5 percent next year.

Many Greeks are moving toward extremist parties on both the left and right, resurrecting ghosts of the country’s bloody civil war in the late 1940s.

The question may not be whether Greek finances are sustainable, but rather, can Greek society sustain more austerity.