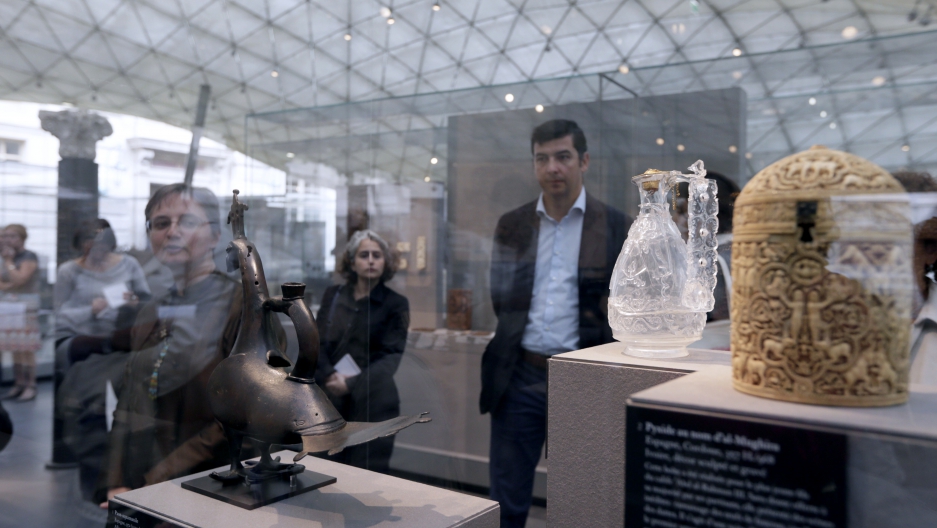 The new Department of Islamic Arts at the Louvre is the largest of its kind in Europe.
Credit: Kenzo Tribouillard
Share

PARIS, France — The Louvre doesn’t do things on a small scale. When the world’s most famous and most popular museum — it hosts more than nine million visitors a year — decided to add a new Islamic art wing, it took $125 million and a decade to build.

Opened earlier this year, its 18,000 works of art have drawn eager crowds. But it remains to be seen whether it will do anything to help bridge the growing divide between most French and the country’s 4 million Muslim residents during an especially tense time.

Designed by Milanese architect Mario Bellini and his French colleague Rudy Ricciotti, the new addition’s wave-like, gold-colored rooftop strikes a sharp contrast to the austere glass pyramid designed by I.M. Pei 23 years ago to serve as the museum’s main entrance.

“More like an enormous veil that undulates as if suspended in the wind,” Bellini described, “almost touching the ground of the courtyard at one point, but without totally encumbering it or contaminating the historic facades.”

Inside, masterpieces representing the Islamic world’s wide cultural reach from Spain to India and spanning the 7th to the 19th centuries fill 30,000 square feet and two floors of galleries.

“There is a zest for Islamic art that I think is fairly new,” Louvre president and director Henri Loyrette said before the wing’s opening in September. “Our task is to reveal the face of this radiant civilization.”

President Francois Hollande has called the new wing a "cultural" and "political" act of confidence and "peace."

Economic disparities and accusations of racism have fuelled anger among Muslims that has sometimes bubbled over into riots, in a country that banned wearing the full-face veil last year.

Riot police were stationed around Paris during the gallery’s opening after a French weekly, Charlie Hebdo, said it would print satirical cartoons showing the prophet Muhammad. The publication followed a series of deadly riots in several Arab countries against a video privately produced in California that mocked Muhammad.

However, visitors said the Islamic wing largely succeeds in its mission. “It always helps to know more about other people’s cultures,” one woman said. “A comprehensive exhibition like this gives you something to study and appreciate, and widens your understanding. We need to be more open.”

The collection dates to the museum’s founding in 1793, and was considerably increased in the late 19th and early 20th centuries. Objects are arranged chronologically, with delicate manuscripts and textiles on display on the lower floor, away from natural light, and stone sculptures, glassware and metalwork on view in glass display cases on the upper.

One afternoon, three young Korean women stood before a celebrated basin known as the Baptistery of Saint Louis, from 14th-century Syria or Egypt, named for its role as Louis XIII’s christening vessel. Inlaid with silver and gold, a procession of figures in various poses and costumes line the copper alloy basin’s exterior above a variety of aquatic-animal engravings.

More from GlobalPost: 'Helmut' the mammoth found near Paris

In another display case, the sturdy molded bronze Monzon lion from Spain, dating from the 12th to 13th centuries, appeared about to leap off its pedestal. Several visitors took their time in front of a striking 16th century ceramic wall from Turkey, with blue, green and brown tiles arranged in elaborate latticework patterns. Built around 1000, a crystal pitcher called the “Ewer from the Treasury of Saint-Denis” was highly valued in its time for its supposed mystical qualities. Pear-shaped with a round base, it is decorated with images of animals and vegetation and topped with a gold filigree lid.

Other exquisite pieces are as simple-seeming as a sensuous jade bowl from 15th century Iran whose beauty requires no translation between cultures. Together they’re aimed at depicting Islamic culture not as a monolith, but a diverse collection of religious and secular currents its organizers hope will help speak for the need for tolerance.