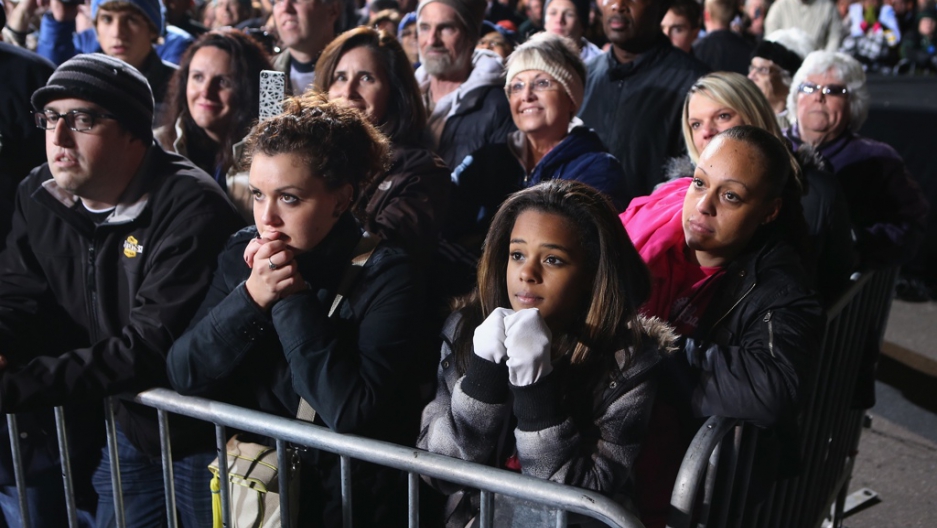 IOWA CITY, Iowa — The Hamburg Inn, Iowa City’s premier breakfast site, is a happy place these days. Morning crowds line the sidewalk waiting to sample the restaurant’s famous pumpkin pancakes, and the post-football business keeps the place humming on Saturdays when the Hawkeyes are at home.

But Hamburg Inn’s real claim to fame is its Coffee Bean Poll: the series of mason jars and the bowl of coffee beans that stay out from just before the Iowa Caucus, in January, until election night. Each patron is allowed one bean per visit — strictly on the honor system, of course — and they cast the pellet in the jar marked for their preferred candidate.

Iowa gave Mitt Romney his first comeuppance. Originally hailed as the winner of the Iowa Caucus by a mere eight votes, he was stripped of his victory two weeks later; a recount showed that Rick Santorum had a 34-vote advantage. By that time, of course, Romney had convincingly won New Hampshire’s primary, and was well on his way to the Republican Party's nomination.

But the real test of presidential mettle came at the Hamburg Inn, where Obama got 6,001 beans to Romney’s 1,741. There was also a “vinegar” vote, for “sour on all candidates,” but the intrinsically optimistic Iowans put just 197 beans in that jar. The results were broadcast on local television and highlighted in the Iowa City press.

Hamburg Inn is also where, more than 10 months ago, I began my journey.

I have traveled from Maine to Florida, from Washington State to the District of Columbia. I have learned to love shrimp and grits, but did not especially warm to corn dogs.

I have re-established contact with long lost friends and made dozens of new ones. I have interviewed rich and poor, young and old, Democrats, Republicans and everything in between.

My car has traveled more than 50,000 miles since January, and my psyche has journeyed even farther. I now know where Nebraska is, for one thing. I have fallen in love with Idaho and resolved never to go back to Arizona voluntarily.

These, of course, are not the most important discoveries I have made.

“What was the most surprising thing that you found?” one young woman asked me after hearing of my travels.

The question caught me off guard — I mumbled something about polarization and fear. She nodded, not really understanding what I was saying. We were at a Romney rally the night before the election, and she was surrounded by people who thought, felt and looked exactly as she did. The other side was the enemy, made up of people intent on destroying the country she loved.

But after last Tuesday, I have changed my tune a bit. What we all expected to be a long and agonizing process of recounts and challenges was over by 11:18 p.m.: Barack Obama reclaimed his seat in the Oval Office for another four years, and by a comfortable margin.

Most of us heaved a huge sigh of relief at that point; no matter one’s political persuasion, nobody wanted a repeat of 2000, when a recount stretched into a court battle, with the Supremes finally called to settle things.

Obama was re-elected by a diverse group of Latinos, blacks, Asians, whites, women, and young people. He was also overwhelmingly supported by academia — almost every college town I visited, even in highly conservative states, was a bastion of liberal values.

His support base reflects all the complexities of our modern society. His campaign slogan “Forward!” was well chosen — on issues such as gay marriage, equal pay for women, and reproductive rights, Obama represents the future.

Romney’s hordes of “angry white men” were not enough to stem the tide. Women claimed record numbers of seats in the legislature, and other barriers are rapidly falling as well — witness the election of Tammy Baldwin, a Democrat from Wisconsin, and the first openly gay woman to be elected to the US Senate.

The quarrels are far from over, of course. The Republican right might rue its decline, and even a wounded dragon can still belch fire.

In the meantime, there is much to celebrate.

My hostess for election night, Elaine Brye, was both elated and troubled. Brye was the “Military Mom” who so movingly introduced Michelle Obama at the Democratic National Convention in Charlotte, NC.

She is mother to four children serving in various branches of the armed forces and a fifth who is heading in that direction. She was catapulted from a quiet life on a farm in rural Ohio to national prominence when she sent the first lady a Christmas card.

“I’m glad that’s over,” said Brye when CNN called the election for the president. “But what am I going to wear to the inauguration?”