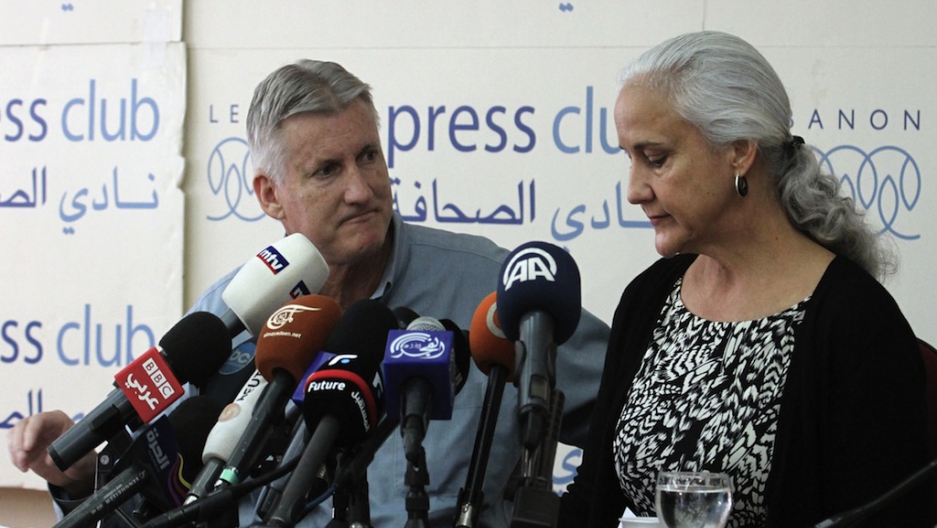 Mark (L) and Debra (R) Tice, the parents of Austin Tice, an American journalist who has been missing in Syria since August, speak during a press conference at the Press Club in Beirut on November 12, 2012.
Credit: ANWAR AMRO
Share

The family of missing freelance journalist Austin Tice begged for information at a press conference yesterday in Beirut. Last seen in the Damascus suburb of Darayya, Tice has been missing in since mid-August, and a video released in September seemed to show Tice alive.

There has been no news about him since.

"How can we contact him? And how can we return him to our family? If anyone who hears this has any information about Austin, especially what we can do to bring him home, please contact us," said Marc Tice, according to the Miami Herald.

Tice is a 31-year-old Marine Corps veteran and foreign correspondent for the likes of McClatchy, Al Jazeera, the Washington Post and others, as well as a law student at Georgetown University. He's been in Syria reporting on the civil war since he entered the country by crossing the border with Turkey in May, said the AP in an article on his parents' press conference yesterday.

"We really have no idea who is holding our son, and that is our main purpose, to try to make contact with our son,” said Debra Tice, who traveled to Beirut from the family’s home in Houston, according to the Washington Post.

The Miami Herald reports Debra reached out to the Syrian government on Twitter by sending a message to Syrian Foreign Ministry spokesman Jihad Makdissi who replied, “If he is to be found inside Sy. I am def sure ur gov will B notified. R u sure he is inside Syria? Reports he entered illegally.”

The family has set up a website in English and Arabic, asking for information about Austin and expressing hope that those who are holding him are keeping him safe.

In a Facebook post shortly before he went missing, Tice wrote that he wished people would stop telling him to be safe or asking why he was going to Syria. He said it was the "the greatest thing I’ve ever done, and it’s the greatest feeling of my life." Time magazine blogger Thomas Gibbons-Neff explained the rationale behind Tice's sentiments in a post in October that's worth reading.

So that’s why I came here to Syria, and it’s why I like being here now, right now, right in the middle of a brutal and still uncertain civil war. Every person in this country fighting for their freedom wakes up every day and goes to sleep every night with the knowledge that death could visit them at any moment. They accept that reality as the price of freedom. They realize there are things worth fighting for, and instead of sitting around wringing their hands about it, or asking their lawyer to file an injunction about it, they’re out there just doing it. And yeah most of them have little idea what they’re doing when they pick up a rifle, and yes there are many other things I could complain about, but really who cares. They’re alive in a way that almost no Americans today even know how to be. They live with greater passion and dream with greater ambition because they are not afraid of death.