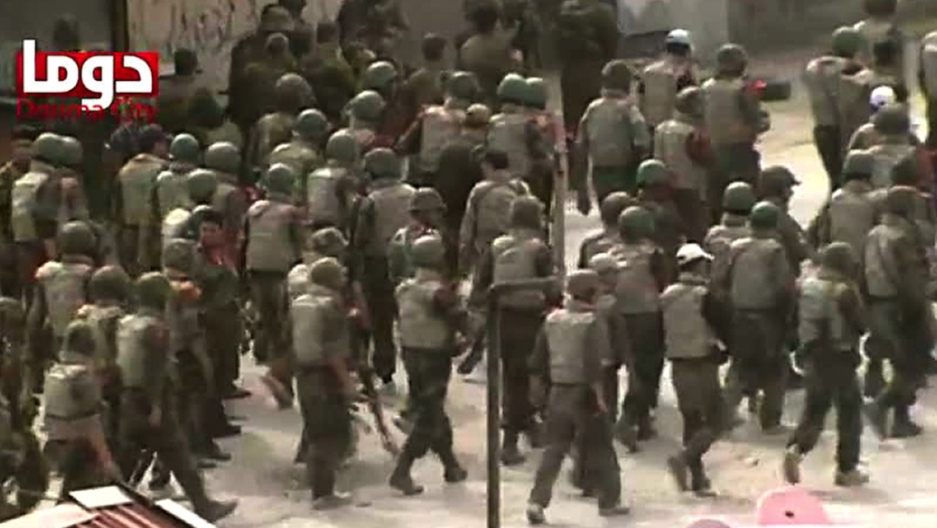 But are these videos reliable?

More from GlobalPost: In-depth: Inside Syria

Last month, a fighter in Aleppo handed a reporter his cell phone, shaking his head in disbelief. “Assad, Assad,” he said.

On the screen was a video of someone beheading a prisoner with a chainsaw. It had been circulating in Syria for at least a year. The footage itself is very real, but it is five years old, and was shot in Mexico. Drug lords carried out the crime. The video has been used by rebels in conflicts all over the world.

The sham videos can have very real effects, creating sympathy for one side or the other. Last week, the United Nations accused the rebels of war crimes, based on a YouTube video of fighters executing prisoners. This type of atrocity makes intervention less appealing to the West.

While that video appears to have been real, many other bogus ones have found their way onto major television networks in the United States and beyond, and are spread widely by social media. It’s not uncommon for the two sides to use the same footage to make opposite claims.

Here is a look at some of the most widely seen — fake or misrepresented — footage and images being used by both sides of the Syrian conflict.

This video posted on YouTube in March by opposition supporters announced the formation of an impressive new Free Syrian Army Special Forces unit. Several months later, the New York Times exposed a fatal flaw. After close analysis, an expert at the Royal Armories in Leeds, a British weapons museum, identified the menacing looking guns. The 11 masked men held in their hands TD-2007’s, Chinese-made toy replicas that are “appropriate for children above the age of 5.”

Almost everyone has been fooled by these videos at some point. Footage claiming to show Syrian soldiers beating detained protesters is actually from Lebanon, and shot four years ago. Still, it was aired by several major news networks in early May. Reuters also ran the video as footage from Syria. It appeared both with and without the warning that it “could not be independently verified.” The Australian Broadcasting Company, ABC, admitted their mistake and posted the above correction.

This is one of dozens of videos circulated by supporters of Syrian President Bashar al-Assad. It claims to show opposition fighters staging scenes of airstrikes and massacres in Syria. It’s impossible to tell, however, whether those are rebels in the video or government supporters trying to discredit them.

After a massacre in the Syrian town of Houla in May, news sites scrambled to find photos to run with their stories. Marco di Lauro, a photographer for Getty, was shocked to find his 2003 image, taken in Iraq, posted under the headline, “Syria massacre in Houla condemned as outrage grows.” A Syrian activist had circulated the photo. And the BBC ran with it.

A Syrian activist posted this photo to Facebook, saying it was evidence that rebels had shot down a government fighter jet. It’s actually a picture from a Russian airshow. The misleading photo was flagged by the Aviationist blog on Sept. 10.

Six weeks after his disappearance, this disturbing video of American reporter Austin Tice was released by an unknown source on YouTube. Tice’s family confirmed his identity in the video, which appears to show him in the custody of Syrian extremists. On a closer look, however, the scene appears faked. The video has been traced back to social media accounts that support the Assad regime and experts have pointed to a number of inconsistencies.  Most likely, the Assad government faked the video to make its case that terrorists had infiltrated the country.

This video is a report by Syrian state television. The reporter says rebel “terrorists” killed the people shown in the video. The reporter can be seen walking through the street calmly interviewing the injured. But is it real?

This is the same video posted by Syrian activists claiming government soldiers killed the same people. The activists question why the reporters in the state television piece are not helping the injured woman. Who should we believe?

This video of Syrian forces allegedly burying alive an opposition activist has also raised suspicion as to it's authenticity. Discrepancies in the sound and a dramatic cut at the end have led many to label the footage fake. Storyful analyzed its credibility.

In this video, also aired on Syrian state television, a Syrian claiming to be a resident of Homs says that the Al Jazeera cable network is broadcasting false reports about ongoing conflict in the city’s center. He films the Al Jazeera report on his television, which shows a destroyed city filled with smoke, and then pans to his window to reveal a calm street. A blogger, however, later identified the man’s location as central Damascus.

One of the most disturbing fake video claims is a combination of two videos posted separately by opposition activists. The first shows rebel forces holding 16 prisoners in or near Damascus. A later video posted by activists appears to show the same men bound with their throats cut. The results are not conclusive. Other video of the same prisoners and the same bodies were uploaded around the same time between Aug. 14 and 18, but they have since been removed from YouTube, making clear identification almost impossible.