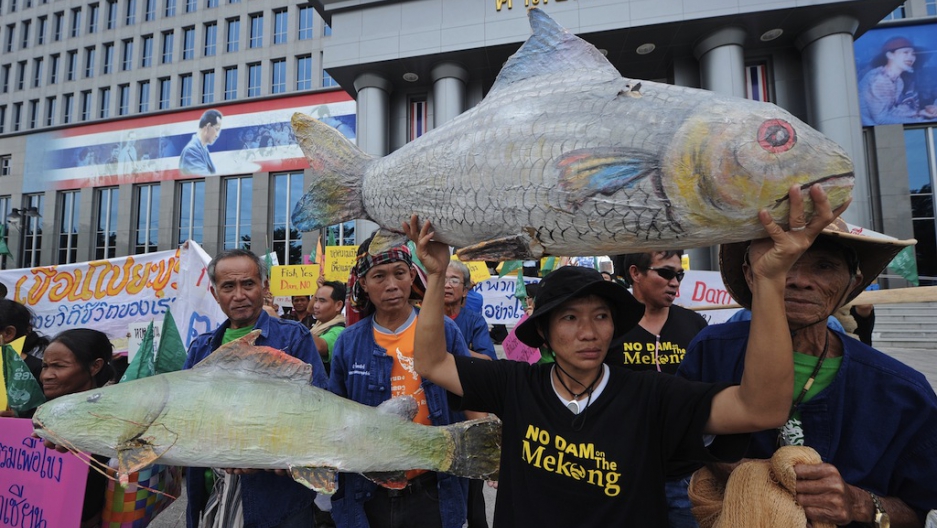 Thai villagers who may be affected by the construction of the Xayaburi dam in Laos hold models of fish as they protest in Bangkok in August, 2012. Activists have continued to rally against the dam, which broke ground last week, saying it will negatively impact the fishing industry.
Credit: PORNCHAI KITTIWONGSAKUL
Share

Laos began construction last week on a multi-billion dollar hydro dam project that is opposed by other countries along the Mekong River, and activists who say the project will significantly impact the environment and the economies of four countries that rely on the river for fishing and agriculture.

"The decision by Laos to push ahead with the giant Xayaburi dam makes it the first of what could prove to be a cascade of 11 proposed dams on the lower Mekong," said the Economist last week. "Because the decision fails to take account of the consequences for downstream countries, it has raised tensions with neighbors."

The Xayaburi dam was proposed 18 months ago, and Cambodia and Vietnam asked for more investigation into what the effects the dam will have on the countries downriver. Meanwhile, Thai activists have sued their country for making a deal with Laos to buy electricity generated by the dam and have begun a "flotilla" protest on the river.

More from GlobalPost: Damming the future? Livelihoods at stake on Mekong River

Hydroelectricity may be beneficial to an extent, but many say that the economic effects of selling energy to Thailand is not worth the environmental and economic damage that may be done to other countries' fishing businesses and the rice crop. A Portland State University study last year estimated losses could run as high as $274 billion if the dams are built, reported the LA Times.

The Lao government claims the dam will be equipped with state of the art features that will allow fish to pass through, but environmentalists don't buy it. The Mekong is home to some of the biggest fish in the world and it's not likely all the ones that need to will be able to cross the dam.

“They are playing roulette with the Mekong River,” said Ame Trandem, Southeast Asia program director for International Rivers, to the Times. “There are serious risks for the river and the people who depend on it.”

These risks were supposed to be analyzed in studies done by a Finnish company called Pöyry, which recently announced it would have a central role in construction.

Pöyry is now working outside the Mekong River Commission (MRC) a group of Mekong countries that focus on promoting cooperation between the countries along the river that depend on it as the region's largest and most valuable natural resource.

Under an agreement through the MRC struck nearly two decades ago, one country must consult the others on major projects before construction begins. But construction began last week, and Cambodia and Vietnam still aren't in total agreement with the project, an issue that's compounded by the conflict of interest problem: Pöyry is the company profiting from the dam and also funded the studies on it.

More from GlobalPost: Will Chile put lights out on that dam project?

International Rivers said regarding Pöyry's possibly unethical place in the controversy of pushing the dam forward:

Pöyry determined that the project was “principally in compliance” with the MRC’s standards for dam-building, despite identifying over 40 additional studies that are still needed to understand the project’s impacts. In cases where the project was unlikely to meet the MRC’s requirements (e.g. for fish passages or dam safety), Pöyry simply omitted any mention of those requirements. Pöyry also recommended that construction continue while these studies were carried out. Scientists widely criticized the study, given the significant risk that many of the project’s impacts cannot be mitigated by the unproven technologies that Pöyry proposes to use.

Now, Cambodia and Vietnam are still calling for more studies on the impacts of the dam, but not demanding those be finalized before construction gets heavily underway. It seems they've bought Pöyry's line, and the discussion has shifted away from the MRC treaty.

According to the LA Times, when construction began last week with a groundbreaking ceremony, there was no complaint from Cambodia or Vietnam, although it's not clear if silence and acceptance mean the same thing. Government officials from those countries did not respond to the Guardian's requests for comment.

"We had the opportunity to listen to the views and opinions of different countries along the river," said Laos Deputy Prime Minister Somsavat Lengsavad at the groundbreaking last week. "We have come to an agreement and chose today to be the first day to begin the project."

It's not clear what action, if any, other countries affected by this or future dams will take.