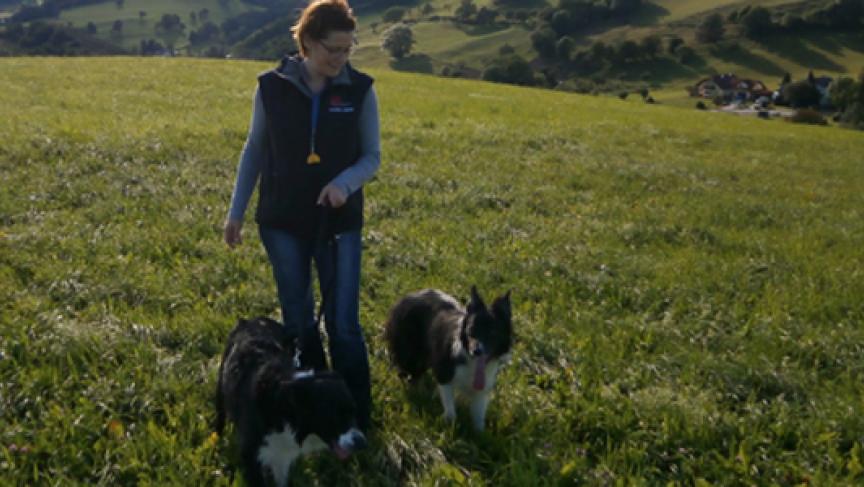 Editor's note: This report comes by way of a partnership with NOVA. See more on this story.

The Veterinary University of Vienna’s Clever Dog Lab aims to find out what makes a dog bold or shy, eager or sullen, with the help of some 600 Austrian dogs that owners volunteer for experiments.

The results could improve the training and selection of dogs that serve society, from helping the disabled to assisting the police.

In the rolling hills of Lower Austria, a sleek black-and-white dog winds its way up a grassy slope. It tenses and darts. Then it pauses before darting again.

This is Pip, a young male border collie.

“He’s looking for the sheep,” said Pip’s owner, Christa Veits. “He’s trying to find them because he knows that they must be somewhere over there.”

Veits has trained Pip to work with sheep. She has a small flock of 35.

At last, the sheep come into view. Pip dashes off, circling wide around them, and then slowly advances toward them. The flock scurries away.

Pip follows his herding commands, but Veits says he has had an independent streak ever since he was a puppy. He tended to venture off to explore.

Even now, it's not always easy to get him to come back.

About 15 miles away, in the heart of Vienna, another dog is showing off a few tricks. This is Nessie, a tan terrier mix.

“Her favorite trick is to walk around me backwards,” said her owner, Ulli Stangl.

Sure enough, on command, Nessie leaps around Stangl in a tight circle, facing backwards. Nessie watches her owner intently.

Stangl says Nessie rarely strays from her side.

“She likes to be very close to me,” Stangl said. “If I am in my bed, she’s mostly next to me. If I am sitting in my camping chair, she’s under it or on my lap.”

Pip and Nessie live very different lives, but both spend time at the Clever Dog Lab, an unusual facility at the Veterinary University of Vienna.

“We are interested in lots of different questions concerning dogs,” said Friederike Range, a biologist who helps run the lab.

Range says the main goal of the lab is to investigate how dogs understand their world.

“This includes, of course, their social world (i.e., other dogs and people) as well as their physical environment,” he said.

The lab has been around for five years. It's one of a small number of research centers around the world devoted to studying how dogs think and behave.

Scientists say this is an important field of study because domesticated dogs have evolved to live with humans, meaning they may have a lot to tell us about our own brains and behaviors.

To do its work, the Clever Dog Lab relies on pets as volunteers. More than 600 dogs in and around Vienna participate in the experiments.

One of the main research interests here is canine personality. The scientists run the dogs through tests to measure traits like extroversion, agreeableness, neuroticism, and dependency.

Nessie — the city terrier — arrives for a session at the lab. She is about to undergo a test to see how she will respond to a novel object.

Lisa Wallis, a Ph.D student in the lab, sets up the experiment. She places a battery-powered stuffed toy on the floor and switches it on. The toy giggles and starts rolling around.

Nessie approaches the toy to investigate but quickly returns to her owner for the rest of the minute-long experiment.

Wallis says the way an animal responds when it sees something new in its environment reveals aspects of its personality.

“A very bold individual would probably immediately approach in a confident manner with a confident tail position (and) body position,” she said. “And a very shy dog might not approach or might need more support from the owner before it would come closer.”

On this particular scale, Nessie rates somewhere in the middle. She is fairly dependent on her owner.

Pip, the border collie, is up next. He is about to take a different personality test — to see how dependent he is on people.

The trial starts with his owner looking on as Pip plays ball with the experimenter, graduate student Stefanie Riemer.

Riemer uses a tennis ball to play fetch with Pip. He runs all over the room, his tail wagging furiously. He cannot get enough.

Riemer then asks the dog’s owner to leave the room. Pip does not even register her departure. He keeps on playing.

Next, Riemer leaves the room. Only Pip remains inside.

Riemer goes to a neighboring room and watches how Pip responds via a live video feed.

The results are clear — Pip is a very independent dog. He can entertain himself, which is somewhat unusual for a dog.

The animals that come through here are run through dozens of tests like this.

One thing the lab is trying to work out is the role of genetics versus the environment in shaping canine personality. Sometimes multiple dogs from the same breed are compared.

The scientists are also studying how personality changes as a dog ages, just as it does in humans.

“Because our dogs are living longer and longer because they’re getting better veterinary care, we’re getting an aging population of dogs,” Wallis said. “And what people are realizing is that old dogs suffer from (a) doggie version of human Alzheimer’s, which they call canine cognitive dysfunction.”

Wallis hopes to pinpoint which personality changes in dogs are a natural part of aging, and which ones are not — to determine the best way to care for older dogs.

Some of the work being done in the lab has implications for dogs that are used as service animals. Riemer says for these dogs, personality is key.

“A good guide dog has to be quite self-confident,” she says. “They have to say to the owner, ‘No, we stop here,’ if there’s some danger that the blind person doesn’t see.”

On the other hand, a seizure dog — which can help someone with epilepsy identify an impending seizure — should be more dependent. It needs to be focused on its owner, Riemer says.

There is a personality test trainers use to help predict which puppies will work out best as service dogs, but Riemer says that test has not been fully validated. Part of her work is to see whether a puppy’s performance has any bearing on its performance as an adult.

This work could also be useful in helping place pets from shelters — finding the right match between a dog and a new family, for instance. That may require taking the personality of both the dog and the owner into account.

Veits, Pip’s owner, would agree. She has five border collies and says they have five different personalities.

“I (chose) those dogs because I could see that there’s something in them that I have in my character,” she said. “Every dog is a part of me.”

And every dog of hers volunteers at the Clever Dog Lab. She says it provides a chance for them to exercise their brains.

At the end of the session at the lab, Veits secures her five border collies in her van and heads back to the countryside. The sheep await.