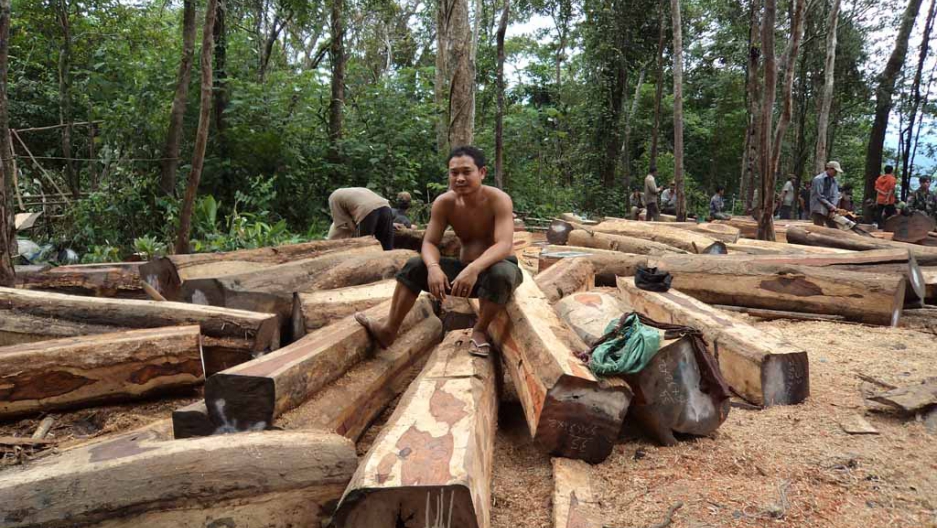 PHNOM PENH, Cambodia — Hang Serei Oudom told his 7-month pregnant wife that he was going out to meet a source.

A journalist for Vorakchun Khmer Daily, he was investigating illegal logging for luxury woods in the jungles of Cambodia's northeastern Ratanakkiri province.

Three days later, on Sept. 11, he was found in the trunk of his car, which had been abandoned in a remote cashew nut plantation. “According to the autopsy report, his head was beaten in with a sharp tool, like an axe or a machete,” said investigating judge Luch Lao. “We are investigating the case.”

They needn't look much further than Oudom's last article, activists contend. On Sept. 7, he had published a piece accusing local military police captain Ing Sieng Lay of smuggling timber in military vehicles. Oudom, 44, “wrote many articles on illegal logging, social issues and land grabbing,” according to his editor-in-chief, Rin Ratanak.

Oudom is the third victim this year whose murder appears related to logging and land grabbing in Cambodia. Dozens of villagers and activists have been jailed or injured trying to defend forests and land rights.

As destruction of Cambodia's tropical forests intensifies, concerned villagers and activists across this poor, small Southeast Asian nation are rising up to defend their country's precious resources. But by doing so, they are becoming targets for persecution, violence and even killings, by powerful private interests that profit from the timber trade.

In April, prominent environmental activist Chut Wutty was killed, allegedly by military police, in southwest Cambodia while investigating illegal timber trade. In May, a 14-year-old girl was shot dead by security forces during a forced eviction of a village in central Kratie province.

Mam Sonando, an independent radio station owner, was convicted to 20 years in prison on Oct 1 for inciting a "secessionist movement" in the evicted village — a charge that rights groups describe as baseless.

“[M]ost powerful people in the province” benefit from the timber trade, and will strike at anyone who interferes, according to Pen Bonnar, provincial coordinator for local human rights group Adhoc.

So far, police have arrested two suspects in Oudom's murder, but Bonnar thinks more influential figures, like high-ranking officials, are behind the killing. “Everyone here suspects that,” he said.

According to UK-based watchdog Global Witness, violence over Cambodia’s natural resources has reached “unprecedented levels.” The victims “should be heralded as national heroes for protecting the environment and their communities; instead they face increasing persecution while those responsible walk free,” said Global Witness director Patrick Alley.

The killings, he said, “are indicative of the increasing fight by Cambodia’s political and business elite to grab what remains of the country’s land and forests for themselves and eliminate anyone who gets in their way.”

Cambodian Council of Ministers spokesman Phay Siphan said such assertions were overblown. “When one reporter is killed because he reports on illegal logging, it doesn’t mean the whole country is bad,” he said.

Siphan denied that Cambodian forests are being stripped by a powerful few. “We are rehabilitating the forests,” he said. “Everything is under control.”

About 2.8 million hectares — an area nearly the size of Belgium — was lost between 1990 and 2010, according to the UN’s Food and Agriculture Organization, which estimated that 10 million hectares, or 57 percent of the country, remained forested in 2010.

Since then, forest losses have dramatically worsened following an upsurge in illegal logging of luxury wood species, and a rapid increase in large-scale forest clearing by licensed agro-industrial companies.

Luxury wood species, often referred to as rosewood, are protected in all Mekong region countries, but Chinese demand is driving a rampant black market trade, according to the UK-based Environmental Investigation Agency.

The brownish-red wood is prized in China for traditional luxury furniture sets that “now fetch hundreds of thousands of dollars,” the agency said in a February report. An unprocessed cubic meter of rosewood is worth up to $50,000 in China.

Powerful officials, businessmen and military commanders run the trade, hiring poor villagers to do the hard labor. Some are even sending workers into nearby Thai national parks to smuggle back rosewood. Many villagers do not return, as Thai border guards have been quick to gun down smugglers on first sight. Scores have died in recent years.

“At least 31 villagers were killed from early this year until September. The number increased from 16 deaths in the whole of last year,” said Srey Naren, Adhoc coordinator in the border province Oddar Meanchey.

On Nov 3, three Cambodians were shot dead by Thai soldiers in Trat province, on the border with Cambodia’s Battambang province, after they were caught logging rosewood, according to media reports.

“The authorities have limited ability to stop it since most of the traders are powerful people,” he said. “Some of them are generals.” The villagers are persuaded to risk their lives by traders who offer up to $1,500 per cubic meter of smuggled rosewood, which can be sold on for $5,000 in the capital Phnom Penh, from where it goes to neighboring Vietnam and eventually China, according to Naren.

While the booming rosewood trade has emboldened criminal logging rings, the single biggest threat to Cambodian forests has been the rapid increase in agro-industrial estates for crops such as rubber. The government has long touted investment in plantations as an important rural development model, but in recent years the number of approved concessions has jumped, and firms now control about 2.1 million hectares of land, according to research by local rights group Licadho.

The concessions are highly controversial, as companies are accused of human rights violations and large-scale land grabbing in farming communities. In May, the government announced a moratorium on plantations, but rights groups say it is filled with loopholes.

The spread of concessions has lead to massive deforestation as many are allocated in the dense forests of southwest and northeast Cambodia. Increasingly, plantations are also being approved in national parks, where about 400,000 hectare — or 15 percent of Cambodia’s protected dry land forest — has been lost since 2010, according to Licadho.

Ministry of Environment officials have insisted that only “degraded forest” on the fringes of parks is being converted, but in practice, companies are allowed to clear-cut and sell pristine parts of protected forest, ostensibly to develop the areas into plantations. In central Cambodia for instance, Boeng Per wildlife sanctuary lost 22 percent of its forest cover, located in its untouched core, while in Ratanakkiri, firms were granted 16 percent of Virachey park, mostly unspoiled hillside forest on its eastern border.

WWF Cambodia director Seng Teak said in March that the group was “extremely concerned about the recent approval of large-scale concessions in protected areas,” which he noted were approved without conducting prior environmental impact assessments. The areas, Teak warned, “are the last strongholds for many species, such as tigers and elephants, and without them these populations will be put at risk.”

Some fear recent developments signal a complete collapse of Cambodia’s forest protection system. “The floodgates are open. In the past, [authorities] were careful not to put these concessions in protected areas…now they deliberately target them,” said Marcus Hardtke, a German environmental activist who has worked in Cambodia since 1998.

According to activists, the companies use their close ties to the ruling Cambodian People’s Party to obtain approval for plantations in forest areas, in order to harvest massive stocks of mid-value tropical hardwood. The timber fetches several hundred dollars per cubic meter and is sold in neighboring Vietnam, which is an international hub for indoor and outdoor wooden furniture production.

“It’s just a timber grab; sometimes [companies] don’t even plant rubber or cassava” after forest clearing, Hardtke said, adding that many firms also buy up wood logged outside their concession, which they transport out under the cover of their license, effectively laundering the illegal timber.

As loggers race to grab a share of the forests, they are accused of paying off local authorities and hiring state security forces to quash local dissent. With opposition growing among communities and activists, violent confrontations over forest losses are becoming frequent.

Hardtke’s friend Chut Wutty, with whom he ran the Natural Resources Protection Group, was investigating a company suspected of buying timber from outside its concession in Koh Kong province, when he was stopped on a public road by military police and killed because he refused to hand over his camera.

“What we have now, is people being shot for looking at things or taking photos, by government soldiers [who are] hired as mercenaries by the timber mafia,” Hardtke said. “It’s a complete breakdown of the rule of law.”

Cambodia’s impoverished rural population, which represents about 70 percent of its 14 million inhabitants, has been hit hard by the forest losses, as most subsist on small-scale farming and collecting food and non-timber products from the rich tropical woodlands. Indigenous groups are most dependent on the forest, which is also the abode of the local spirits of the animist tribes.

“Most tell me that they fear they will lose their land, their homes, their forest and their culture, and what is the future for the children?” said Sao Vansey, director of the Indigenous Community Support Organization.

Faced with worsening forest devastation and government inaction, local activism has increased markedly and last year dozens of communities across Cambodia began organizing their own jungle patrols. These have since stopped many illegal logging crews and seized numerous chainsaws and thousands of cubic meters of timber, while protests against plantations in forest are rising.

This grassroots movement is centered on Prey Lang, a unique 650,000-hectare lowland evergreen forest in central Cambodia with a 135,000-hectare pristine northern core, where threatened species like the Asian elephant, clouded leopard and pileated gibbon roam.

Rampant illegal logging, mining and plantation concessions are devastating Prey Lang, along with the livelihoods of roughly 200,000 local people. Most are indigenous Kuy, who gain income from tapping forest trees for resin that can be sold to make varnish and paints. Resin trees are protected under Cambodian law, but about 250,000 trees in Prey Lang were cut in recent years without any consultation or compensation for affected villagers, according to the Prey Lang People’s Network, a local NGO.

During a visit to Prey Lang early this year, Kuy villager Chum Yin, 27, said his community in Kampong Thom province’s Sandan district had been forced to stand up against logging after it threatened to destroy local incomes. “After the loggers arrived, it badly affected villagers’ livelihoods,” he said. “In my village, 17 families lost all their resin trees.”

Yin and other Kuy tribesmen in the area began holding regular forest patrols in groups of about 30 villagers. “When we see forest crime, we spread out and surround the loggers,” he said.  “We confiscate the chainsaws and burn them along with the timber. The loggers … we let go, because they are just hired by timber traders, like senior officials and military police officers.”

Yin accepts that he is taking a risk by interfering with the timber trade. He said he had already defied a direct warning late last year when local officials told him to end the patrols. “They threatened to arrest or shoot me, but I am not scared of their threats because I don’t do anything illegal,” Yin said. “Our network is only here to prevent forest clearing.”