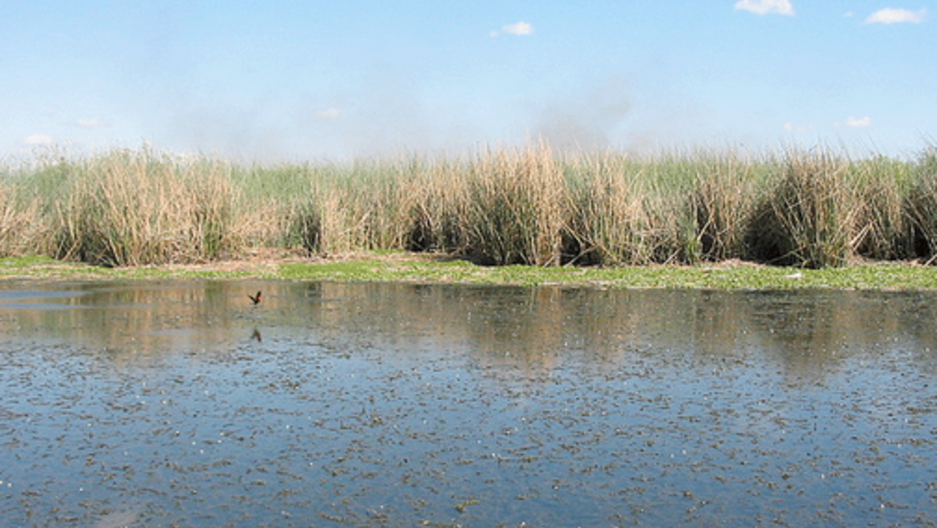 The Sacramento-San Joaquin Delta in California is a risk management nightmare. BUt a group of scientists is trying to change that. (Photo by T. Pennington.)

Evaluating disaster risk is a major industry. Researchers in California are working to reinvent how it’s done.

Whether it’s a hurricane or oilrig explosion, disasters take a huge toll. Predicting them, accordingly, is big business. But as much as it might help, risk assessment can also get in the way, especially when it provides a false sense of security.

If you’ve heard anything about water battles in California, chances are they were happening here. The Delta is where two major rivers meet and flow out to San Francisco Bay. At least, they used to. Today, a lot of that water is pumped elsewhere.

Rune Storesund, a researcher at University of California, Berkeley, is part of a team developing a new engineering concept called Resilient and Sustainable Infrastructures.

"A lot of Southern California’s water comes through the Delta through the State Water Project," he said.

The road that runs along the levee is bracketed by corn on one side, the river on the other. Only, the corn is planted on islands, much below the ground.

Most of the islands in the Delta aren’t natural. Beginning in the late 1800s, people built levees to hold back the rivers and marshes so they could farm.

But the peat soil they exposed has decayed over time, which means these islands are sinking.

"Something that’s, you know, maybe a tenth of an inch per year over a hundred years is a lot of inches," Storesund said.

The levees aren't in great shape either. There are cracks and bulges in the road, signs the levee sides are shifting, moving and slumping, he added.

Water seeps underneath the levees, so these islands have pumps running night and day to keep the land dry. But seepage can also weaken levees. And you don’t have to go far to see the devastating, disastrous results.

Back in 2004, one section of the levee collapsed. Fields of corn were totally wiped out, railroad tracks were damaged, as were a power substation and an aqueduct that runs to the Bay Area. And this was the second time in the past 30 years a levee has collapsed in that particular area.

The Delta is home to a lot of major infrastructure, gas lines, transmission lines, railroad, highways, and it all depends on the levees. Storesund says a major disaster here would be felt across the state.

"We’re talking billions of dollars," he said. "I think if a major earthquake occurred that failed a number of levees, it would be months to years before the State Water Project were up and running again."

All that combined makes it practically the ideal place to study risk.

"A lot of the risk analyses are very difficult, complex, not transparent, and when decision-makers look at them, it doesn’t really tell them a whole lot," Storesund said. "And so we’re trying very hard to come up with new ways of communicating."

Robert Bea, who leads the Resilient and Sustainable Infrastructures project, says it took a long time to build this tangled mess of risk in the delta. Bea has spent his career studying disasters. In fact, his students have nicknamed him Dr. Disaster.

"I joke with people — in many ways, my career has been one disaster after another," Bea said.

Bea's been studying levees specifically for a long-time too, dating back to 1965 when he lost his first home after a levee broke in New Orleans.

"The levee that failed in 1965 failed again in 2005, in the same place. So I go back, drove up to the home and the neighbors were dragging wet, oily mattresses out of the front door, just as I had done 40 years earlier. I broke down and cried," he said. "I was just madder than hell."

The more Bea studied disasters, the more he realized what was missing from his risk assessment. Bea says people, or human and organizational factors as he calls them, have had a major role in all of the disasters he’s studied.

But it’s not easy for engineers to take them into account.

"I joke and say engineers hate uncertainties because our world is most comfortable when it's deterministic," he explained.

Bea and this team are trying to define these uncertainties in the Delta. Normally, risk analysis is expressed in one number — that there’s a 75 percent chance, say, of failure. Instead, the RESIN team is defining a best-case scenario, worst-case scenario and what is likely to happen.

Bea says that provides decision makers with more information to work with.

"You put yourself out in 2100, and you look back, and say, I can't use a patch and pray approach, because if I do, I’m going to fail," he said. "It's going to be horribly expensive, so you start to develop what I call the 'let's get the hell out of Dodge City,' approach, which means a strategic withdrawal over a long period of time."

In the Delta, in particular, the problem is, in part, that each group has its own risk assessment. No one in particular has to look at the integrated risks. But Bea's trying to change that.

"It is still amazing to me to watch the push back from engineering itself. Change is hell," he added.

For his part, Bea is injecting social science into the engineering curriculum at UC Berkeley. He says while it may not be easy to fit human behavior into mathematical equations, it’s crucial to more accurately portray risk — and to prevent future disasters.