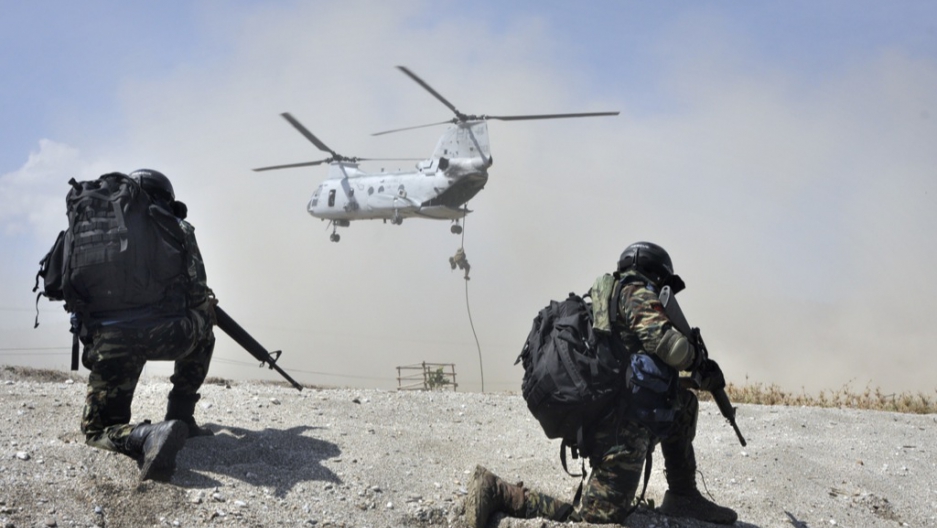 East Timorese soldiers of the Timor Leste Defense Force (F-FDTL) take up position on the shore as US Marines rappel from a US military helicopter during a one week joint US-East Timor military exercise in Dili on October 16, 2012.
Credit: VALENTINO DE SOUSA
Share

SINGAPORE – This has been a big year for Timor Leste, with one of the world’s smallest and most impoverished countries passing a series of important milestones.

July’s parliamentary elections took place without incident, which means the United Nations - a highly visible presence in the country – will pull out its peacekeeping troops before the end of the year.

This follows peaceful presidential polls held over two rounds in March and April, and the 10th anniversary of independence from Indonesia on May 20. Just after midnight that day, on the outskirts of the capital Dili, new president Taur Matan Ruak was sworn into office in front of tens of thousands of Timorese and dignitaries including Indonesian President Suslio Bambang Yudyohono.

I was also in the crowd, and although the atmosphere was relatively subdued, the enthusiasm of the Timorese people for their hard-fought freedom and democracy was clear. It was certainly a long time coming.

Centuries of Portuguese colonial rule ended in 1975, but weeks later the fledgling state's powerful neighbor, Indonesia, invaded on the pretext of fighting communism, backed by the US. A bloody guerrilla war followed, ending with independence in 2002.

Walking home after the 10th anniversary ceremony, I got lost. After wandering for some time in the early hours, I noticed someone beckoning to me from an SUV parked in traffic. I gratefully climbed in the back and got chatting to the driver, a pleasant, sharp-suited man who said his name was Juvencio and he worked for the Ministry of Internal Affairs. He spoke good English and appeared to be in his late 30s.

Juvencio told me he'd had a grandmother in England; I was intrigued and asked him about her. She wasn’t his real grandmother, he explained, but a Quaker and peace activist who had written to him during the seven years he spent in jail for his role in the resistance movement. When he was released she invited him to the UK, but he couldn’t get a visa so he flew to Dublin and met her there instead. She is dead now, but he spoke of her warmly. His affection for her was as clear as his enthusiasm for urban planning and improving the lot of Dili residents, which was his focus now.

He dropped me back at my hotel and reached around to shake my hand. I didn’t even get a good look at his face. But I have thought of Juvencio often since that night, for he symbolizes to me both the tragedy and the hope of Timor Leste.

The task of reconstruction after decades of conflict has been made easier by the nation’s large reserves of oil and gas, but nearly half the population of 1.1 million still lives in poverty and corruption is widespread.

Political violence has also been a sad feature of independence, with widespread unrest in 2006 and the attempted assassinations of the president and prime minister in a 2008 failed coup. The UN Integrated Mission in Timor Leste - with around 3,000 military, police and civilian personnel - was deployed to keep order following the 2006 crisis, which displaced tens of thousands. There is also a 450-strong contingent of Australian and New Zealand peacekeeping troops.

“We fought for our country and we got it. Now, we have to fight to fulfill our independence, and that task is not easy,” says Zesophol Caminha, a Timorese journalist and former guerrilla fighter – an old comrade of Juvencio - now based in the US.

“The majority of Timorese, especially in the districts, still lack their basic needs such as water and sanitation, and basic health services. The development issues are also challenged by the inequality that exists on many levels - between men and women, the urban and rural areas, those with political connections versus others, and wealthy versus poor. This can contribute to future instability and perpetuates the ongoing interpersonal violence that currently exists within homes and communities.”

Still, there are good reasons to hope that better days are ahead. The country has one of the fastest-growing economies in the Asia-Pacific region, and is saving for the future by depositing revenue from offshore oil and gas fields in its sovereign wealth fund, which now stands at around $10.5 billion. Around 75 percent of children now attend primary school, a significant increase from a decade ago.

The past five years have been mostly stable, and Caminha feels that now is the right time for the UN to leave.

“I think it is important to give us an opportunity to run our own country now,” he says. “I understand that to build a nation and to unite all the people who were so long oppressed by the invaders is not as easy as we might have expected. It requires extra energy, extra work in order to fulfill our dream of being an independent state standing on our own feet. We restored our independence a decade ago. Like a child we were crawling, learning how to walk and sometimes falling, but we got up and now we are reaching our teenage years as a nation. I believe if all the Timorese work hand-in-hand together, and leave our differences behind, we can build a prosperous Timor-Leste for us and our future generations.”

Mark Fenn is a British journalist currently based in Singapore. He has lived in Southeast Asia and written about regional issues and human rights issues for nearly 10 years.