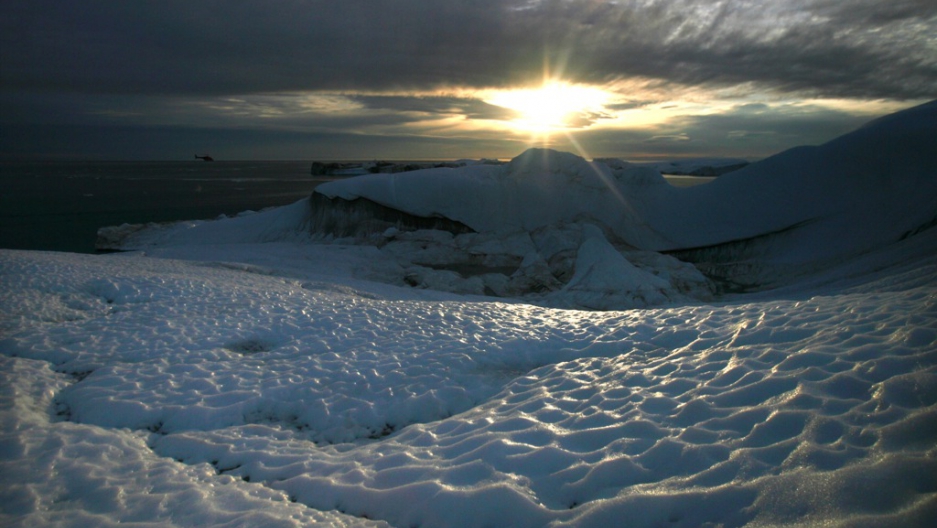 The surface of an iceberg lit by the sun as it sets over the Jacobshavn Bay on August 29, 2007 near the town of Ilulissat, Greenland.
Credit: Uriel Sinai
Share

Last week, Hurricane Sandy put climate change back in the political discussion. Sandy gave the American people a painful taste of what is likely to be in store for us as the planet’s weather continues to change rapidly. The storm inflicted significant damage on regional infrastructure, crippled transit, and left millions without power. Only the extraordinary accuracy of our weather prediction and foresight in preparations by state and local governments prevented a catastrophic loss of life as well.

And yet, while our political leaders treat threats like terrorism, Russia, or cyberwar as existential threats to America’s national security, they lump climate change into an issue that only special-interest “environmental” campaigners care about. While no one doubts the existence of al Qaeda, many otherwise serious politicians have questioned the underlying facts about climate change.

This has to change, and it starts with the facts. First, climate change is real and it is already underway. The temperature record is undisputable. Over the past century, the average mean global temperature has risen about 1.4˚F (0.8˚C). The warmest decade on record was the 2000s, with each of the three decades previous to that warmer than the decade before. While it is true that the earth’s climate has always undergone periods of fluctuations, this period is notable because it is especially rapid and unprecedented in the prehistoric record.

Next, climate change is largely caused by a global surge in greenhouse gas emissions that were introduced at beginning of the Industrial Revolution. While the climate and weather systems are very complex, the science behind the “Greenhouse effect” is relatively simple. The earth is habitable because gases like carbon dioxide (CO2) and methane trap heat, like a blanket around the earth. However, humans have added more greenhouse gases to the atmosphere by burning fossil fuels. This causes the atmosphere to trap more and more heat.

These basic facts should not be in dispute. An estimated 97 percent of climate scientists agree with these basic facts. There are disagreements – as in every field of science – that are largely focused on the sensitivity of the climate to precise additional emissions and the impact that those emissions have on weather patterns. Many scientists contend that the earth is likely to suffer greater harm than the scientific consensus says. It is simply not credible for a politician or a commentator to question those facts by cherry picking evidence or claiming that there is no scientific consensus.

The effects of climate change have never been more apparent. Sea levels are rising by about 3 mm per year. Arctic sea ice fell almost 50 percent below the 1979-2000 average. In 2012, more than 15,000 heat-related records in the United States were broken. This summer the US experienced the worst drought since the 1930s. Unprecedented fires occurred across the western United States. And, last week, the East Coast was hit by a storm unprecedented in size. Climate change is happening and is getting harder to ignore.

While projections of how much the climate will change are clearly uncertain, we do know that the longer we wait, the worse it gets.

Reducing greenhouse gases while implementing adaptation measures is basic risk management. Military planners and business executives routinely operate under uncertainty and make decisions based on incomplete information. If a battlefield commander waited until all facts were known about an advancing enemy, he would put his troops at risk. When 97 percent of the experts tell us that operating on a business-as-usual trajectory will exponentially increase risk, why is it that we dismiss them?

Facts will eventually force action. Although the presidential campaign was largely devoid of a discussion on climate change, the President Obama, during his second term, and the Congress will be forced to take serious steps to address this real and accelerating problem. As the American Security Project’s new Climate Security Report makes clear, climate change threatens national security. It acts as an accelerant of instability around the world and it poses clear dangers to America’s homeland security.

Climate change will impose costs. There are costs of inaction. We can either pay now by investing in clean energy technologies and sensible measures to adapt to the consequences of a warming climate, or we will pay later in disaster response. These investments will not be cheap. Investments in flood gates and surge barriers to protect vital harbors will cost billions, as they did 50 years ago in The Netherlands. Clean energy solutions in the United States are necessary, but must be paired with action around the world. Climate change is a global problem that will require global solutions. By unleashing American ingenuity and entrepreneurship to develop solutions, we can avoid the worst consequences of climate change and protect our vital national security interests in the process.