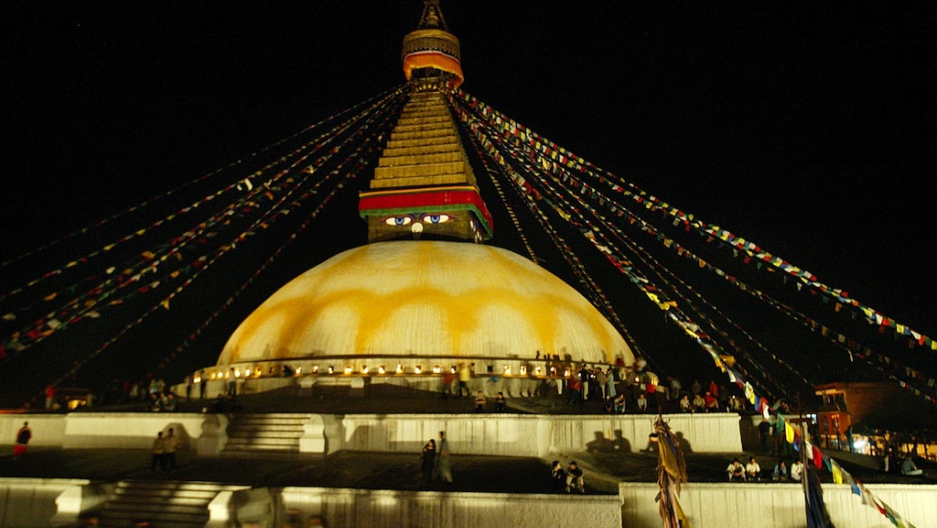 Boudhanath, one of the world's largest stupas, is shown illuminated on the occasion of the 2547th Buddha Jayanti, or Buddha's birthday, May 16 in Lumbini, Nepal. Stupas are dome-shaped structures that serve as a Buddhist shrines. The village of Lumpini is known to the world's Buddhists as the Buddha's birthplace.
Credit: Paula Bronstein
Share

Days after reviving a controversial project to develop Buddha's birthplace in Lumbini, Nepal, with the aid of a China-backed non-profit organization, the former leader of Nepal's Maoist rebellion has invited India, too, to join in creating what some have derided as "Disneyland for Buddhists."

"Nepal, China and India should come together and form a strategic partnership through this Lumbini project for peace, stability and development in the region and Asia," said Pushpa Kamal Dahal, also known as Prachanda, according to India's Saturday Hindustan Times.

He also mentioned discussions with top Chinese and Indian leaders on the project but didn't give any information on how Indian government or companies could get involved, the paper reported.

As GlobalPost reported earlier this week, Prachanda, who is now the chairman of Nepal's Unified Communist Party, has reportedly inked a deal with the China-backed Asia Pacific Exchange Cooperation Foundation that will bring in $3 billion to develop Buddha's birthplace at Lumbini into a "world-class city attracting tourists and pilgrims from across the world."

According to the Indian Express, the agreement was signed by Linus Xiao Wunan, executive vice chairman of the APEC Foundation and Prachanda in his capacity as chairman of Nepal's steering committee. But members of Nepal's other political parties challenged his right to sign the deal unilaterally.

“The issue was not discussed in the committee, and it has not authorised Prachanda to sign it in the manner he did,” the Express quoted Minendra Rizal, former Minister for Culture and a Nepali Congress leader, as saying.

“This project has enormous potential and will benefit Nepal, India and China and I have spoken to Indian authorities and they are positive about the project,” Prachanda said during the signing ceremony, according to the report. He did not disclose the details of the project, its total cost, or the time needed to complete it, however.

As GlobalPost reported in January, some see China's enthusiasm for Lumbini as part of a larger "battle for Buddha," pitting Beijing versus New Delhi in the quest to expand "soft power," or cultural influence, within the region.

In this struggle, India seeks to use its common cultural heritage to overcome China's ethnic ties to the overseas Chinese in Southeast Asia, and China seeks to limit the damage from its repression of religious freedom in Tibet and its incessant sparring with the Dalai Lama.

“This is part of China's effort to use Buddhism to gain an entry into Nepal, [and] to show to their Buddhists that they're showing equal attention to Buddhism outside the country,” Jayaveda Ranade, formerly additional secretary for East Asia with the Indian government, told GlobalPost of a Chinese proposal for the development of Lumbini.

Born Prince Gautama Siddhartha in what is today Nepal, the Buddha achieved enlightenment, gained his spiritual following, and died (or achieved final nirvana) in India. As a result, Bodhgaya, Sarnath and Kushinagar, located in the north Indian state of Bihar, remain major pilgrimage centers for believers from around the world.

But in India Buddhism was subsumed by Hinduism, and New Delhi has done little to spread the wealth from tourism to Lumbini — which most view as less significant than the three pilgrimage sites in India. So as Nepal's tourism ministry seeks to lure 500,000 visitors to Lumbini in 2012, expectations of Indian support are not too high — though India claims to be “more than happy” to contribute.

As the Express reports, Prachanda was among the nine vice-chairs of the APEC foundation last year when it announced that the project was a done deal. But he had to backtrack following a protest from the Nepalese authorities, due to perceived irregularities in the way the agreement was forged.

Bizarrely, for instance, China's state-run People's Daily first reported that APEC had inked a deal with the United Nations Industrial Development Organization (UNIDO) to create a “special cultural zone” in Lumbini, only to be forced to retract the story when first UNIDO, then Nepal, denied any knowledge of the pact. Even weirder, it surfaced that not only Prachanda but also the controversial Paras Bir Bikram Shah Dev, Nepal's former crown prince, held positions on APECF's board of directors.

As GlobalPost wrote then: at nearly one-tenth of Nepal's entire gross domestic product, $3 billion was a stupendous sum — and, some suspect, a wholly fictional one: a carnival barker's cry, crude propaganda, or a “trial balloon” to gauge how Nepal might react.

Apparently, the money isn't getting any smaller, and neither APECF nor Prachanda is throwing in the towel.