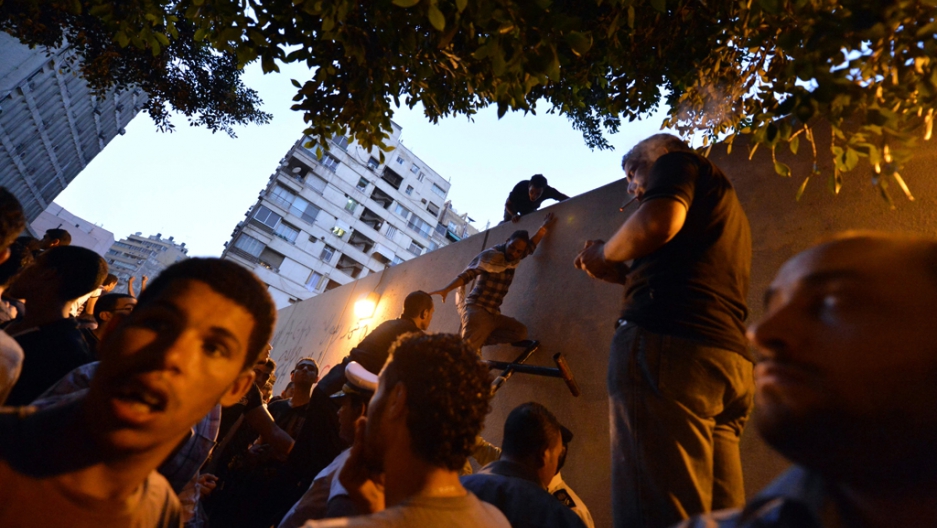 Egyptian protesters climb down from the wall of the US embassy in Cairo on September 11, 2012 during a demonstration against a film deemed offensive to Islam. Thousands of Egyptian demonstrators angered by the film produced by expatriate members of Egypt's Christian minority resident in the United States, tore down the US flag during the protest at the embassy.
Credit: KHALED DESOUKI
Share

They have every hallmark of Anonymous, the amorphous hacker collective that has tripped up everything from governments to banks in recent years. The one difference? The Izz as-Din al-Qassam Cyber Fighters are fighting for the Muslim world.

The group, which has attacked US-based banks, claim to be operating independently, contrary to what US officials have reported.

After protests erupted throughout the Muslim world in response to the anti-Islam video "Innocence of Muslims," the hacker collective took their grievances online.

"This is the first time that we know about, where a Middle Eastern entity, perhaps a Middle Eastern government, has attacked websites, critical infrastructure, in the United States," said Richard Clarke to ABC News.

However, representatives of the hacker collective have denied any associations with governments and say they are operating independently, taking orders from no one.

A representative of the collective told Softpedia, “US prefers to merge the insult issue with this case to decrease the insulting burden and change it to a confrontation with its competitors. No country supports us.”

Taking their name from a Syrian preacher that fought against French, British and Zionist elements in the Levant in the 1920’s and 1930’s, the collective has wrapped itself in the rhetoric of anti-imperialism.

However, the goals of the organization are now limited to removing "Innocence of Muslims" from YouTube. The insults made against the Prophet Mohammed served as a catalyst for uniting the collective.

“There is no other objective and if the movie is removed, the attacks will be stopped. Protesting against insult to the prophet united and coordinated us,” said the Izz ad-Din al-Qassam Cyber Fighters representative.

“We have never said that we don’t like American people; rather, our statements have been about the ruling system of this country. This is not just our opinion but the opinion of the 99 percent of American people as well,” said the Izz ad-Din al-Qassam Cyber Fighters representative.

The groups has also denied affiliation with Anonymous.

“Our group has not had cooperation with Anonymous yet. We are not reliant on any specific utility for our operations, and we particularly didn’t use multiboot.me in our attacks,” the representative said.

While the Izz ad-Din al-Qassam Cyber Fighters claim to be a single issue hacker collective, "Innocence of Muslims" and the mass protests that followed the release of the video brought together the first hacker collective of its kind — one that acts in defense of Islam.

More from GlobalPost: The Pirate Bay moves to the cloud