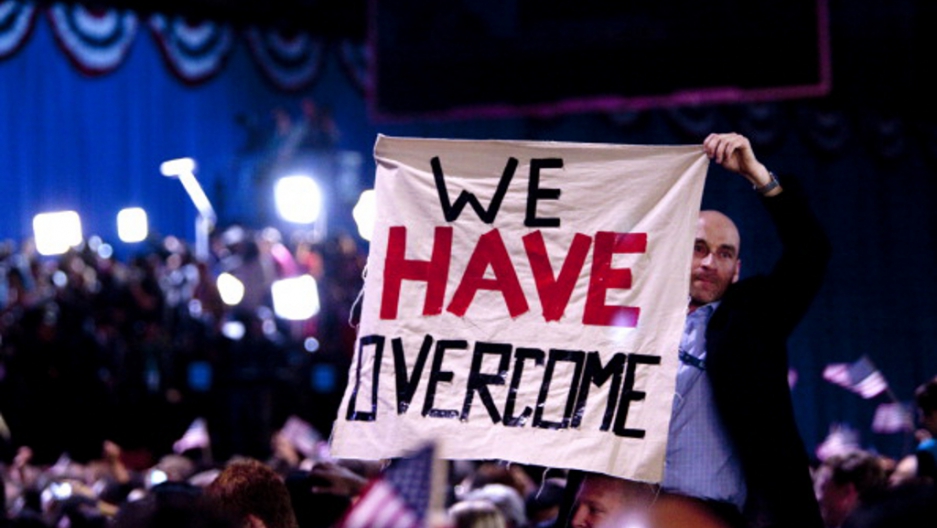 A man on a friend's shoulders holds up a sign saying "We have overcome" — a play on a popular civil rights tune — at the Barack Obama victory rally in Chicago.
Credit: Melanie Stetson Freeman
Share

IOWA CITY, Iowa — Barely had the confetti stopped swirling on election night when the recriminations began. The howls of anger and pain from the political right almost drowned out the roars of jubilation from relieved and excited liberals.

The challenger, Mitt Romney, was not conservative enough, they fumed. No, he was too conservative. It was his constant policy ballet that doomed his candidacy. No, Romney was too entrenched in unpopular positions to appeal to a wide enough swath of the public.

Any and all of these statements are true, of course — Romney was widely criticized as so amorphous toward the end that he provided something of a Rorschach test for his supporters.

The last domino fell Thursday night, when the Romney campaign finally conceded Florida. The Sunshine State had been too close to call on Tuesday, and desperate Republican staffers were scrambling to find a way — any way — to stop the mounting toll of Electoral College votes. President Barack Obama will end with 332 to Romney’s 206 — much wider than anyone but the New York Times’ Nate Silver had predicted.

There has been surprisingly little fuss — at least so far — about election fraud. The conspiracy theorists who spin lunatic theories about President Barack Obama somehow having orchestrated Hurricane Sandy to demonstrate his leadership are probably still too much in shock. Watch for it, though — those urban legends about voting machines calibrated to change all votes to “Obama” are out there, and will doubtless come back to haunt the president.

The Congress has shown signs of backing away from its entrenched obstructionism; there is little to be gained by doing everything possible to make life difficult for Obama. He will not be up for re-election in two years — or indeed, ever again.

The representatives will, though, and a plunge off the fiscal cliff, should that unlikely event come to pass, would be much more detrimental to them during the 2014 midterms than to the president.

So, in general, it seems that things could be looking up.

The president is already planning his next trip — this time to Myanmar, Cambodia and Thailand, within the next week or so.

It will be interesting to see how the Republican right views that. What they dubbed Obama’s “apology tour” to Egypt in June 2009 became a centerpiece of the Republican campaign this time around, and provided Romney with a snarky title to his campaign manifesto, “No Apology.”

There are still some ugly pockets of rage out there. A friend of mine received a call from her son on Wednesday — he is 16 and studying in a military academy that specializes in troubled teens.

“I can’t believe that communist won,” he sputtered, clearly upset.

“Who is telling you this?” said my friend. Her son acknowledged that it was his gunnery sergeant.

“You cannot listen to all of this nonsense,” she tried. “You have to learn to think for yourself. You need to check things out.”

But he was implacable.

“Here they are saying that they will not follow Obama. They will not acknowledge him,” insisted the boy.

“Then they will be guilty of treason,” said his mom. She tried her best to calm him down, but the result was more of a draw than anything else.

Cooler heads in the Republican Party are trying to parse out the meaning of their humiliating defeat, and it doesn’t look good for the future of the GOP. History is against them.

"The demographics race we're losing badly," he told The Washington Post. "We're not generating enough angry white guys to stay in business for the long term."

The anger was there — Republican rallies summoned bile-spewing hordes, most of whom were more intent on throwing Obama out than on getting Romney in.

And with very few exceptions, there was not an “ethnic” face among them.

Statisticians will be poring over the results for years, but the numbers already show that Romney won overwhelmingly among white men, and among white women too. He got almost 60 percent of the "white vote."

But America is changing rapidly. White voters make up only 72 percent of the electorate these days, and Obama had a crushing lead among blacks, Hispanics, and younger voters.

This would suggest that time is, to put it unkindly, not on the side of the “traditional” Republican.

GOP pundits are already talking about “remaking” the party.

“We have to stop the anti-Hispanic rhetoric,” they say, or “We have to reach out to the African-American community.”

They are busy planning a strategy of appealing to younger voters, to women, to the LGBT community. They will need to make concessions on Social Security, on immigration, on Medicare, on tax cuts for the wealthy.

In other words, they could turn into Democrats.