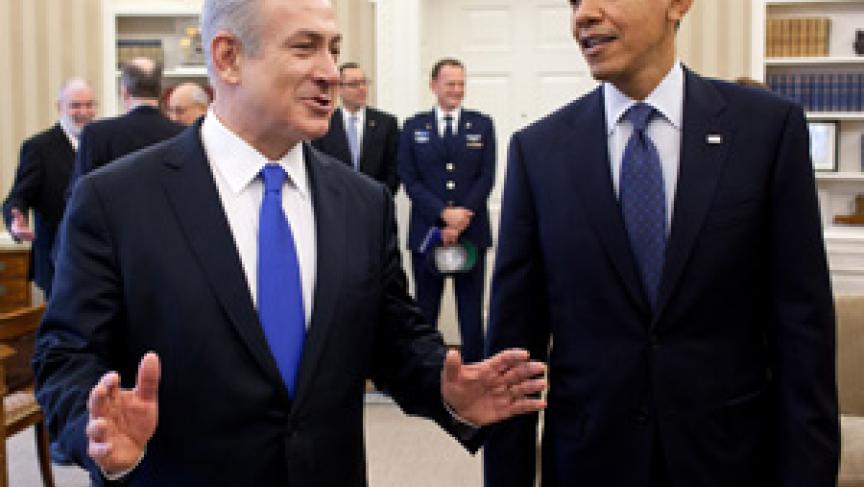 As people around the world watched the the American election play out, Israelis had their own upcoming election to think about.

Israel will vote for a new government Jan. 22. And Barack Obama’s electoral victory is already having an impact on the election campaign there.

It’s an open secret in Israel that Prime Minister Benjamin Netanyahu and President Obama don’t get along fabulously well. Netanyahu, in his heart of hearts, would have much preferred to see Mitt Romney win Tuesday’s election in America.

Now there is speculation that Obama — freed from the constraints of his re-election campaign — might get tough on Netanyahu.

U.S. Ambassador Dan Shapiro was asked about that possibility during an event at Tel Aviv University Wednesday morning; he dismissed it as “ridiculous."

Obama will be “focused on promoting United States interests,” Shapiro said. “That’s what he was re-elected to do.”

There are plenty of reasons why Obama would have little interest in picking another political fight with Netanyahu. But the question is, can bygones really be bygones?

A former Israeli ambassador to Washington, Sallai Meridor, speaking at the same event as Shapiro this morning, was not entirely sure.

“I perceive this president to be very strategic, very disciplined,” Meridor said. “I don’t see him carried away too much by emotions. But I don’t think that we can just assume that what has gone between the two administrations, especially the two leaders, over the last four years, will have evaporated just because there is a second term.”

In other words, heads-of-state are people too. And bad blood could contribute to an awkward tone between Obama and Netanyahu over the next four years.

The prime minister, however, showed an interest Wednesday in putting his best foot forward. Netanyahu met with Ambassador Shapiro and offered his congratulations to Obama during a brief photo-op.

Netanyahu said he looks forward to working with Barack Obama to advance the goals of "peace and security."

Warm words aside, Netanyahu’s political opponents did not wait to pounce.

The centrist Kadima party issued a statement accusing the prime minister of “betting on the wrong president” and getting Israel “in trouble with the US.”

The former-TV journalist-turned-politician Yair Lapid accused Netanyahu of damaging relations with the United States by “meddling on behalf of the Republican nominee.”

One of Netanyahu’s cabinet ministers leapt to his boss’s defense. Transportation minister Yisrael Katz said there was “no Israeli meddling” in the U.S. election.

This “prime minister knows best how to navigate the relationship with the U.S. and the world," he said.

National security expert Mark Heller of Tel Aviv University emphasized that the Israeli public, left, right and center, views Israel’s alliance with America as so vital, that the perception of bad blood between Netanyahu and Obama is sure to be an issue in Israel’s election campaign.

“Some Israelis might be receptive to the argument that it would be better for Israel if someone else were the prime minister — who could open a new page with Obama,” Heller said.

Here’s another possibility though. Netanyahu could also double down and bet against Obama again, so to speak.

Israel’s prime minister could decide to play up his policy differences with the U.S. president — on Iran and on Jewish settlement building in the West Bank and East Jerusalem.

His hope, perhaps, would be that Netanyahu’s disagreements with Obama would be viewed as strengths by the Israeli electorate. And they would re-elect him for another term.