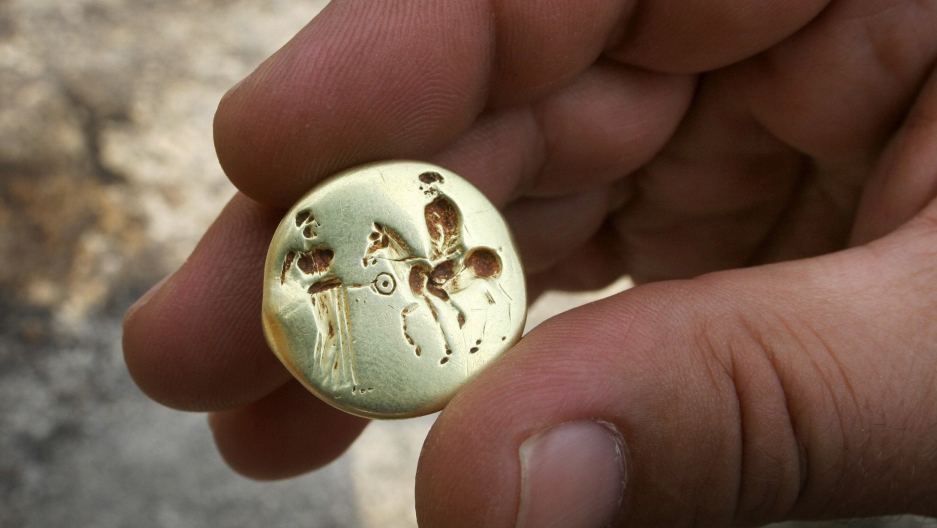 An archeologist shows a golden ring dating from the fourth century BC, found in a Thracian king's tomb near Zlatinitsa, Bulgaria, on 24 July 2005.
Credit: Valentina PETROVA
Share

Archeologists in Bulgaria dug up a collection of gold objects in an ancient Thracian tomb in northern Bulgaria today, the Associated Press reported. The objects were made at the end of the fourth or the beginning of the third century BC, the AP reported.

According to the Guardian, the gold artifacts include bracelets with snake heads, a tiara with animal designs, a ring, 44 female figurines, a miniature horse-head and 100 buttons.

The hoard was excavated from the largest of 150 ancient tombs constructed by the Getae, an ancient Thracian tribe, the Guardian reported. The tombs are located near the modern day village of Sveshtari, 250 miles northeast of Sofia, according to the AP.

The Thracians lived in what is now Bulgaria, and parts of modern Greece, Romania, Macedonia, and Turkey between 4,000 B.C. and the 7th century A.D., when they were assimilated by the invading Slavs.

"These are amazing findings from the apogee of the rule of the Getae," Diana Gergova, head of the archaeologist team and a renown researcher of Thracian culture with the Sofia-based National Archaeology Institute, told the Guardian. "From what we see up to now, the tomb may be linked with the first known Getic ruler, Cothelas.”