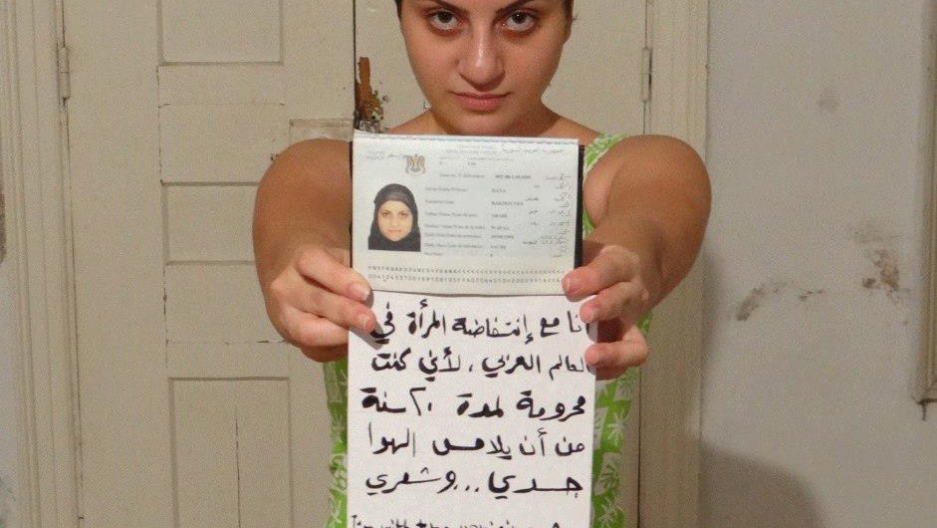 The controversial photo: Dana Bakdounes holding a sign reading: "I am with the uprising of women in the Arab world because for 20 years I wasn’t allowed to feel the wind in my hair and on my body.”
Share

The Uprising of Women in the Arab World, a women's rights group based in the Middle East, today accused Facebook of a systematic attack on their group after a photo posted on their page on the website reportedly drew fire.

The group today said Facebook has repeatedly disabled administrators' pages and threatened to annihilate their accounts for sharing Dana Bakdounes's photo, which shows her without a veil but holding a passport in which she is veiled and a sign reading: "I am with the uprising of women in the Arab world because for 20 years I wasn’t allowed to feel the wind in my hair and on my body.”

Egyptian group activist Sally Zohney told GlobalPost Thursday that The Uprising of Women in the Arab World Facebook page is an important meeting place for the region's women's movement, likening it to the "We are all Khaled Said” Egyptian page at the forefront of the country's recent uprising. That page "became a symbol of change," she said, describing the Arab feminist Facebook movement as "something similar."

But The Daily Dot cited other reports suggesting the the image had been reported for nudity, with group member Farah Barqawi telling Germany's Detektor.fm today that the photo was pulled because it provoked “misogynists and extremists." Feminist Wire said the photo in question had been reported to Facebook for being “insulting.”

In an email statement to GlobalPost, a Facebook spokesperson said, "Facebook has responded to two reports concerning this page – both relating to posted items. In one instance a photograph was removed in error, but later reinstated. The person who posted it was informed and their temporary block lifted. In the second instance an item was removed because it was reported to us and found to have violated our community standards."

Over 61,000 people support The Uprising of Women in the Arab World's Facebook page, and the feminist collective has used the social networking site to launch a global social media project in which users upload pictures of themselves completing the sentence: "I am with the uprisings of women in the Arab world because..."

More from GlobalPost: "I am with the uprisings of women in the Arab world because..." (PHOTOS)

Facebook is actively trying to suppress the sharing of this photo, activists claim, saying they received the following message from the company on Wednesday:

Activists say they were trying to garner support for Facebook's Oct. 31 re-posting of Bakdounes's photo after the original Oct. 21 post was taken down. It has apparently been removed from their site once again, prompting activists to accuse Facebook of a "direct attack," adding in a press release today:

"It also raises serious questions about the true intentions behind FB’s policies, and whether Dana’s 'controversial' image is a mere excuse to shut down the voice of the Uprising of Women in The Arab World."

Facebook has targeted five group administrators and imposed several weeks-long blocks of their accounts, disabling their ability to post or manage the site, activists say.

Several attempts to contact Facebook over the issue were met with "no response," according to the group's press release.