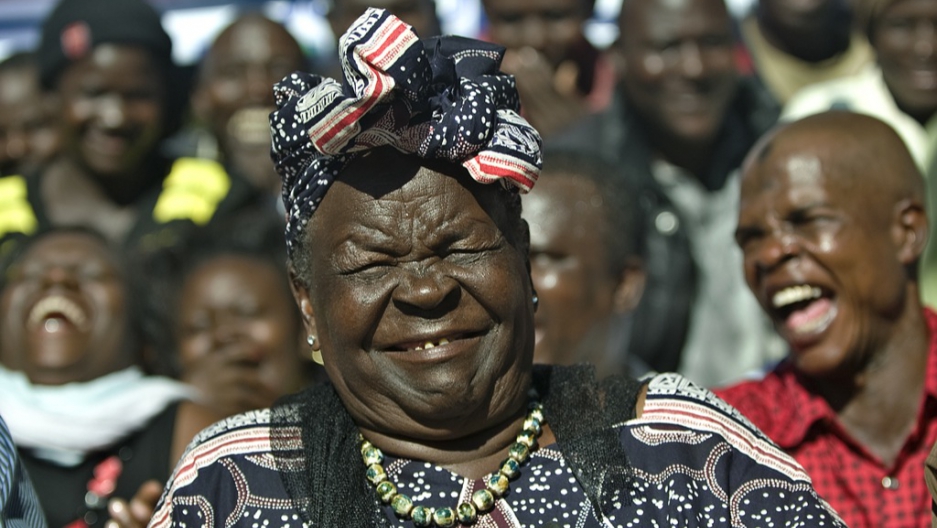 Sarah Obama, step-grandmother to USA's President elect, Barak Obama, reacts with members of her family on November 7, 2012 in the hamlet of Kogelo in western Kenya during a press conference that followed media-anouncements of Obama's apparent victory.
Credit: TONY KARUMBA
Share

KOGELO, Kenya — It was a little after 7 a.m. here — sunrise melting into the clouds and the previous night’s empty brandy bottles scattered in the mud — that CNN called the US election for Barack Obama.

The crowd gathered around the outdoor television in a guesthouse garden erupted, arms in the air, grinning, hugging and dancing.

Kogelo is home to the Kenyan branch of Obama’s far-flung family, a small village that has gotten a lot of attention thanks to its famous son. Obama is popular across Kenya, but nowhere more than in Kogelo, a place that has only recently been connected with electricity and a paved road.

As Americans cast their votes on Tuesday, people here braved the rain and power cuts to hope for and eventually celebrate an Obama victory.

Speaking an hour after her step-grandson was elected to a second term, Sarah Onyango Obama, wearing a voluminous, brightly colored outfit and surrounded by family, friends and neighbors, congratulated the man who calls her “granny.”

More from GlobalPost: If the world could vote: What everyone else thinks of the US election

“It is by the grace of God that Barack has made it and become the president of the United States for the second term,” she said, with one of her sons, Sayid, by her side.

Four years ago, Kogelo was the center of attention as Obama won the US election for the first time. But for Mama Sarah, as she is known to everyone, this win was more significant.

“I rate this victory higher. It was euphoria that took him into office the first time but this one is more meaningful because it is the decision of the Americans after seeing his work,” she said.

Africans have criticized Obama for not paying more attention to the continent, in which his father was born, during his first term. Against expectations, Africa never featured prominently on his foreign policy agenda. He made just one fleeting visit to Ghana early in his presidency.

But Mama Sarah said all that was fine.

“We cannot be bitter. He was doing his job in the place where he is supposed to be working, he was delivering where he was supposed to be delivering and therefore could not be malingering everywhere,” she said to laughs from the crowd gathered at her family home on the outskirts of the village.

Mama Sarah said she believed that Obama’s second term would be good for Kogelo, good for Kenya and good for Africa.

“His victory is positive for Kenya and for Africa because many people in Africa see Obama as someone who can take advantage of an opportunity and succeed,” she said. To loud cheers and cries of “Obama!” she added, “It means Kogelo can produce very intelligent people who are unbeatable.”

People in Kogelo, and Kenya more broadly, find inspiration in Obama. George Oduor, a 28-year old who described himself as a “jua kali” or odd job man, said Obama had shown that people from humble beginnings could achieve great things. He hopes Kenya’s own political leaders might learn from him.

Obama’s own family say they have been inspired by their relative in the White House. Half-brother Abon’go Malik Obama is eyeing a move into politics for the coming elections in March. He said he intends to stand as a an independent candidate for county governor.

“My brother being president has inspired a lot of people, one of them being myself,” he told GlobalPost during an interview at a restaurant he has built in Kogelo, named after their shared father.

“I am the first-born son and this encouraged me to fulfill my dreams,” he said, pointing to both his business interests and his charity named for his father, the Barack H. Obama Foundation. “If my father was around he would be very satisfied with how his children have turned out.”

Despite the closeness of the polls, Mama Sarah said she never doubted her grandson’s victory.

“I was not worried in my heart because I had full faith and confidence that he would win,” she said to more cheers. “It is his God-given time and I am so happy and grateful.”